I disliked sitting and playing the tanpura for long hours and I would always crib about it. 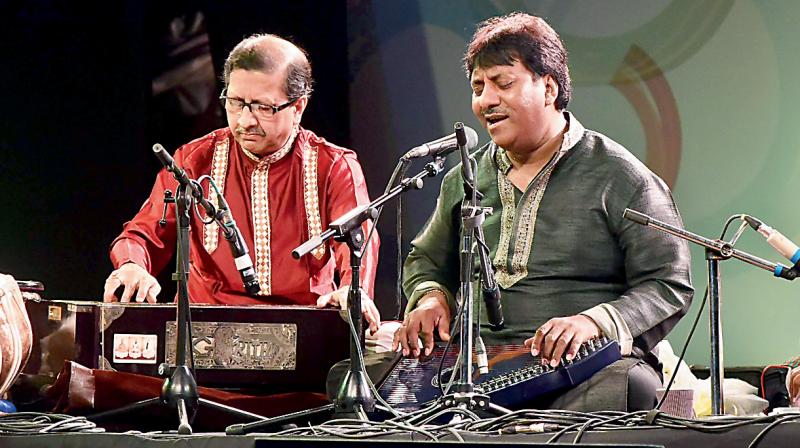 Ustad Rashid Khan during his performance.

When Ustad Rashid Khan sings, everyone just stops and listens to him. In the midst of an interview, as he was recalling an incident, he looks at his fellow artiste and breaks into a raag. It is only then that you realise why he is one of the most loved classical singers of his generation. “My first performance was at the age of eight, I was so nervous, I still remember it like yesterday,” says the Ustad. “These days I don’t get nervous unless I’m performing for some of the big names in music,” he says. In Hyderabad for the 14th edition of the Krishnakriti festival of art and culture, the first time he was here was when he was 22 years. “It was quite a memorable trip and performance. After my show, someone came up to me and told me that they cried during my performance,” he recalls.

Ustad’s journey in music started at a very young age. “After my mother passed away, I was sent to live with my mamaji in Mumbai, but I never liked it, so I told my father about it and he brought me back. Then I was sent to my grandfather, Ustad Nissar Hussain Khan, to learn music at the age of six, and then I went to Kolkata to learn music,” he explains.

However for someone who has been performing for more than two decades, it takes you by surprise when he tells you that he never wanted to pursue music. “I disliked sitting and playing the tanpura for so long, I would always crib about it. “Back then, I would get bored and I only wanted to play cricket. The moment I would stop playing the tanpura I would get yelled at, sometimes I would even run away from practising for months and my uncles would catch me and bring me back to my guru,” he laughs.

But over the years,  as the Padma Shri award winner kept performing for some of the big names in the world of music, his interest in singing only grew. Talking about one incident that changed his life he says, “In ’87, I had gone to an event where Pandit Bhimsen Joshi was performing. My friend got me a ticket but the seat was way behind, so I asked the organiser, since I knew him, if he could make me sit somewhere in front, but he scolded me and chased me away.

“That was the day I decided that I would make a big name for myself and come back.” And he did. Today, he has not only won some of the biggest awards, but also has the adulation and love of his fans.

As he gets ready for his show, he says that he has no plans of retiring, “I will only retire when I feel my voice is not of a great quality.”