Music for the soul

The former cricketer, who plays the guitar proficiently, had also sung a duet with Asha Bhosle. 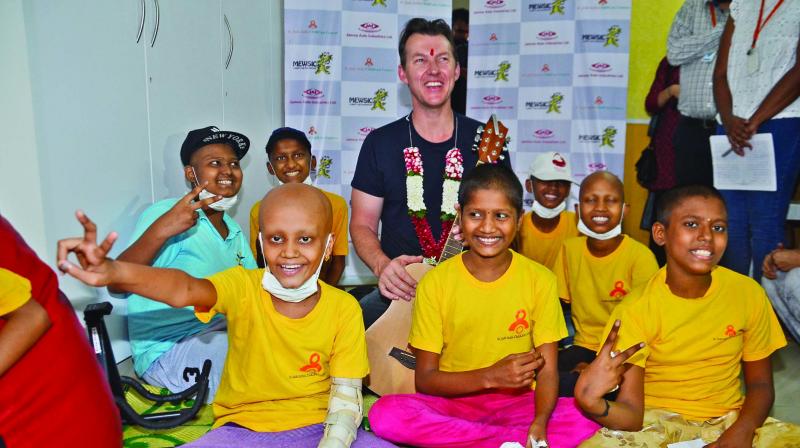 Brett Lee with the kids

Brett Lee has enjoyed quite the fan following in India, and many also know of the fast bowler’s fondness of music. The former cricketer, who plays the guitar proficiently, had also sung a duet with Asha Bhosle.

With Mewsic in 2011, Brett stepped into using music therapy to the benefit of underprivileged children in India. And now, he’s joining hands with St. Jude India ChildCare Centres, to help them use music therapy to help alleviate the pain and suffering of kids suffering from cancer.

As he made an appearance at the Mumbai centre of the organisation, Brett spoke about how music has helped him through his highs and lows too. “Every time Sachin Tendulkar hit me for a four yet again, or scored another ton against Australia, I could always go back home and turn to music,” he said, amidst peals of laughter from the audience.

He adds, “I think growing up as a kid, I was learning about music therapy without even knowing what it was. The joy and the look on my face when my brother would bring out the guitar or when my younger brother or mother would play the piano…the feeling was incredible. So when there’s music therapy, it makes you feel good. You hear a song on the radio that can bring back sad and happy memories. It doesn’t matter what kind of memory it is, music’s a way for your brain to tap into different parts of your life.”

Back in 2011, Brett and Mewsic helped pioneer a clinical music therapy programme at St. Jude’s, in association with a few Australian therapists. This time around, with an Indian therapist, Aastha Luthra, the cricketer hopes to popularise the proven benefits of the therapy with kids.

“We let the children choose the course of how they want to work with music,” Aastha explained. “Some wish to play, while others sing along. We also provide therapy for the parents, so it can help them cope with the stress and anxiety of having to fight with the situation.”

On being asked why he chose music to help kids, Brett quickly said, “Well, cricket and music are two passions of my life. It could’ve well been a cricket academy, but right now I want to focus on the music. As one can see from the kids around us, we’re helping a lot of them out. This is an effort to make their lives a little easy and it complements the treatment they’re going through.”