Rolling in the Latin Beat

A concert that brings back the memory of classical guitar maestros. 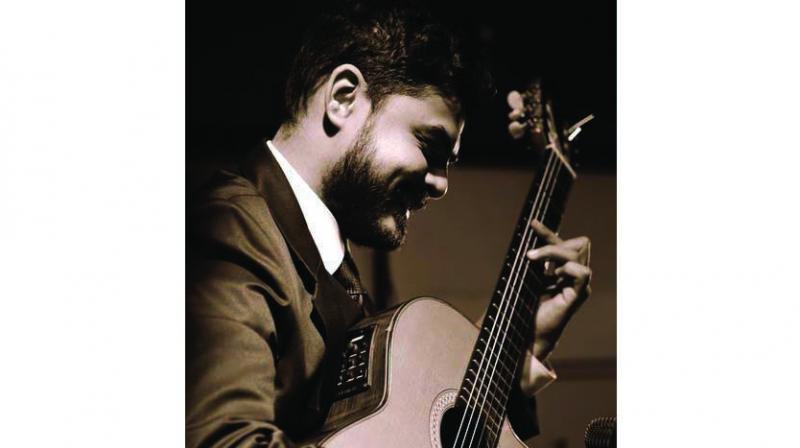 A musician is often faced with strange questions, when he reveals he plays the classical guitar. It was no different for Santanu Datta either. “Oh! You play a classical guitar?,” was a question he often confronted. However, people just admired when they heard him play. For him classical guitar is an intimate instrument. A recent concert in collaboration with Delhi Music Society was organized featuring classical guitar recital by Santanu Datta at the India International Centre. The artist presented a programme of works by Leo Brouwer, Emilio Pujol, Francisco Tárrega, Heitor Villa-Lobos, Isaac Albéniz and Joaquin Turina.

Santanu discovered the classical guitar by chance. His teenage tryst with the instrument continued until it became his passion. After graduating from the Indian Institute of Technology in 2011, Santanu moved to Paris to study Western Art Music.

His musical journey began at the tender age of 5, with his mother, a passionate singer of Hindustani classical music influencing him to the world of music. During adolescence, Santanu discovered the guitar.

”I loved the sound of the guitar. When I started playing it, it wasn’t very popular then,” he recalls, adding how he found out about this guitar in an encyclopaedia and listened to its sound on a CD-ROM and craved to learn it.

He points out although Flamenco guitar and classical guitar look similar, they differ when it comes to the style of playing and adds, “The classical guitar is played for classical music whereas the Flamenco guitar is played for folk music.” To choose what songs to play in a concert is a daunting task, as it is not just selecting songs but also the sequence of performance that matter. He explains, “First of all, you need to have a passion for the songs you want to play. It requires 100 hours of work to learn the song and then perform in front of the audience that can sometimes be risky.” He then says that it is important to have the inner motivation and the love to play that song.

When asked about whether is it difficult to pursue classical music at a time when electronic digital music or EDM is in vogue, he says, “If you are in India and you are a classical musician, this is the best time. The classical music scenario is booming with the economic boom.”

On the notion of whether the culture of presenting to a live audience is dwindling, he says, “You cannot simulate this (live music) experience elsewhere. Coming to a concert hall and listening to someone performing live, it’s about being in the moment. I like the concept of someone playing live in front of you. Just consider the vulnerability of a person.”

For him every concert is a first of its kind. So are the jitters and shivers associated with stage performaces.

“It’s never regular business,” he chuckles, adding, “Every time is the first time someone very rightly said. Every time you go there (on stage), you never know what’s going to happen and that excitement is the reason I play.”

Despite playing the classical guitar for so long he is still excited by it and adds, “You try new things and new challenges. I would play the same songs differently that I played 10 years ago.” An artist’s block is something that all artists go through irrespective of the form of art.

Datta is no different. He details, “Sometimes you go through the bad times. One way is just to take time off and then come back again. But sometimes, you just need to sit down and work.”

On an advisory note, he says, “Be as good as you can be. In the long run, if you are really good at what you do, then you can go ahead regardless of anything.”