I’m Gubbi for you!

Rapper Karthik Sundar Gubbi is ecstatic to tour with his debut album. 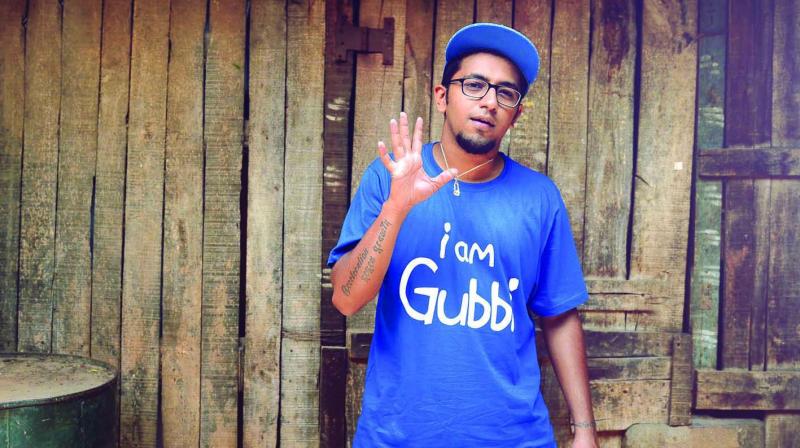 Rapping is a skill that is quite a difficult one to master. But Karthik Sundar Gubbi aka Gubbi has managed to do it with ease. Better still, he raps in many languages namely Kannada, English  and a little German too. Gubbi is all geared up to tour with his recently released rap album - Who Are You? Nannu Gubbi. Talking to the rapper, we find put more....

Watching 8 Mile which is loosely based on Eminem’s life set Gubbi on the path to fame and stardom. “This movie made me realise that there are people with real problems. Listening to his songs, I stood for hours in front of the mirror trying to rap like him. It was a way to vent my teenage frustrations,” he starts off adding that it wasn’t an easy journey and patience was needed.

He shares, “Rap is a competitive genre of music, a healthy one of course. Unlike other genres you got to be the best! Since I have a background in battle rap, I need to bring my A game every time”.

On whether he got all the supported need to venture into this, “Of course I did not get the support. I started rap as a profession in the year 2009. Back then, the moment mentioned I was a rapper, 40 percent of them would go “rapper eh? what is that?” and the next 40 percent would be like “this is not real music” and the 10 percent would actually get the stories rappers had to tell.”

Gubbi obsession for all things Eminem has gone to the extent of having Eminem’s name tattooed on his wrist.

He shares, “My other role model is J.Cole who helped me out of a writers block.” Gubbi gets his rap lyrics from everything that’s happening around him. “I can get lyrics from a pothole or a bunch of wannabe Kannadigas trying to force a language on people. Anything that I see or experience is what triggers my song writing.” It’s been two years since he released anything and he wanted to release something before people wondered who he was. He shares, “I named the album Who are you? Naanu Gubbi! since it was a process of me discovering myself and what music has made me.

The album starts with a song Who Are You and finishes with Naanu Gubbi. There are some amazing artists on the album like Madhura Gowda, Ananya Bhat, Saanvvii Shetty etc.”

On his plans for the album release,  he shares, “The first single, Yelli Maga Gubbi will have a video releasing along side.

I will be performing the entire album live at the album launch along with my band – GUBBI live”. Being an independent artiste, doing a multi-city tour would be a dream.

He shares, “Mysuru, Tumkuru, Mangaluru, Hubli are the cities where I am planning to gig.

I’m starting with Karnataka for now and then will plan to head to other cities.” Graduating from Christ College, Gubbi is planning for many interesting collaborations with artists like Vasu Dixit and Vasuki Vaibhav. Apart from that, he will be making music videos for all the songs in the album.