An Indian fusion band from the city, Shadowz tells us more about their music. 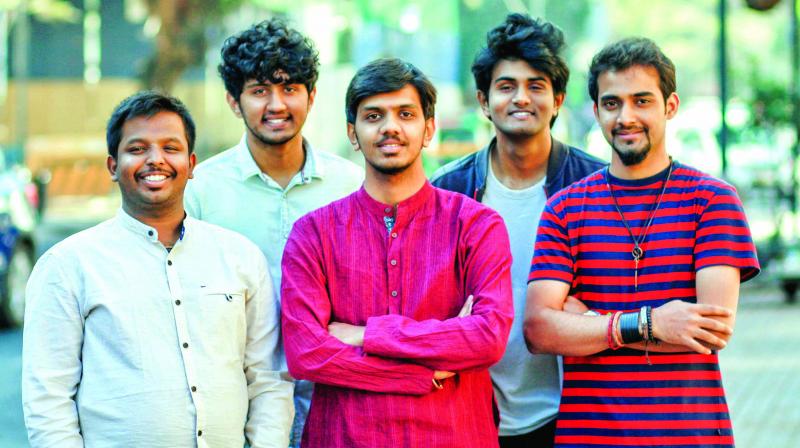 We’re the music you can listen to anytime, in darkness or light. But we enlighten you anytime. We stick to you like your shadow — Shadowz, the Indian Fusion band believes in this firmly.

They started as a two-member band and soon there were six boys in their band. They’re experimental with their music. You can expect classical ragas with a Western twist. They work on music like others work on maths and physics equations, taking inspiration from anywhere and everywhere. The band comprises Arvind (keyboard), Akshay (drummer), Sanjith (percussionist), Sumukha (flute), Varun (lead guitar and backing vocals) and Vinay (vocals).

“We’re all from different genres of music — blues, Carnatic, Hindustani rock and also metal, but we join together to form Shadowz, an Indian fusion band,” shares Akshay.

Shadowz was initially started by Akshay. He started looking for like-minded musicians from various college competitions, music schools and would jam with them in their free time and make music which made this bond strong. Akshay says, “Though we were all interested in making music, practically it was very difficult to get all of us together at one time, but in spite of our busy schedules, we tried our best to make it for our jamming sessions. Once we started performing full time, jamming together became our first priority and everything else took a backseat. As a band we’re well known for headlining college festivals. We have also played at many TV and radio shows.”

Talking of some of their highs and lows, Akshay states, “When we were only a month old, we were selected to perform at AR Rahman’s KM Music Conservatory concert. We couldn’t have asked for anything more. We have received many compliments from some of the big players in the music industry. We want to travel the world with our music, collaborate with other artistes and spread the message of love, peace and happiness.”