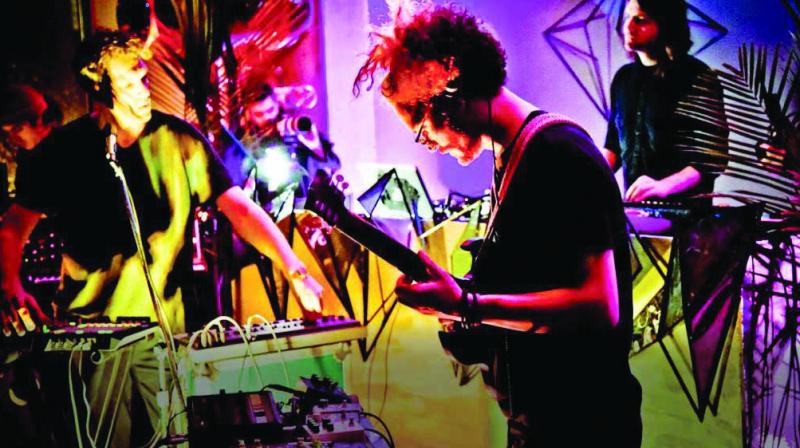 In an interaction with Emil Bovbjerg, we gain insight on the band’s tour of India. In today’s world where global cultural relations are of utmost importance N/UM is a band which narrows the bridge of Indo-American cultural relations. Upon being asked about their tour in India till now Emil Bovbjerg says, “Our time here has been really amazing so far. We played NYE at the Nowhere is Here festival outside Shillong. The crowd was incredible and the festival production and vibe was the best. It was a beautiful place by Lake Umiam and just a perfect setting to bring in the new year.”

About the formation of the band he goes on to say, “We started playing at underground parties and small venues in New York in 2015 but have been working together as musicians for much longer. The idea and concept behind N/UM is something we thought about and worked on for years before recording our first album.”

“Some of us had visited before but some of us not, so our expectations were very open. We are also traveling all over the country and the differences are very big between the different regions and cities. All beautiful and fascinating in their own ways,” adds Bovbjerg

“The response so far has been incredible. We are really excited to see how open people have been to our music. People clearly love to dance and party here and it’s been really heartwarming to be welcomed so warmly with our music.” he quotes. He also feels “Freedom of expression and exploration of the unknown is at the core of what we do as a group, doing free live improvisations. For us, playing this music is all about building and maintaining a community by creating the conditions for people to come together and share great moments together and get lost in a musical universe they may not be used to.”

Talking about what motivates and drives them further Emil says, “Cultural mixing is the most important driving force of development in music and the arts in general and this encounter is very special for us. We had the chance to meet and play with incredibly talented local musicians in Shillong and that exchange is something we really cherish and take home with us as fresh inspiration.”  About inspiration in the field of global music, he comments, “We hope that we can also help to inspire people here in India and in this way pave the way for new musical experiments to come in the future both here in India and back in New York.”

“We are already planning shows here for the next year. The sound and craft of Indian music is awe inspiring and beautiful. We hope to have time to hear a lot more of both contemporary and classical Indian music live while here. The drum beats are an ancient fundamental and powerful element in human interaction and we use that as the foundation of our experimentation in music. In addition we use harmony, melodies and also words and voices in the mix which all plays important parts in the impact of the music in the end,” he opines. “All music evolves but not necessarily in the direction of better or worse. Music is everywhere now and what is really important is diversity and openness to new influences and new ideas. To steer away from the mass distributed and corporate media standard playlists and to delve into the more unknown and experimental or underground currents is what we really feel is important for the art form to continue its development in all directions. This is essentially our hope for the future of music everywhere,” he signs off.