The gentle grip of Tyagaraja grows on you as you mature with the music. 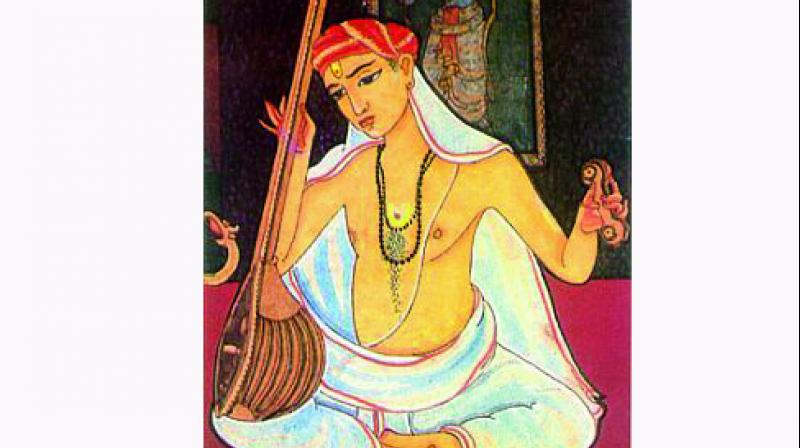 The gentle grip of Tyagaraja grows on you as you mature with the music.

The 250th birth anniversary of Saint Tyagaraja is being commemorated in all music-loving circles. He remains the epitome of the saintly, the scholarly, the devoted, whose single muse was Lord Rama. Every Carnatic music learner is introduced early to Tyagaraja. The sanctity of a concert repertoire would be compromised without Tyagaraja — such is the unwritten rule followed by most musicians.

There are more reasons to this than merely following a tradition. The gentle grip of Tyagaraja grows on you as you mature with the music. There are few songs that can give a fillip to the concert at the onset as a Sobillu Saptaswara, or Tulasi Dala, rounded up with a few brisk swaraprastharas. Of course, not to mention other stellar compositions that embellish the concert throughout. Always this apparent simplicity and uplifting melody without feeling overwhelmed in a maze of words.

I grew up listening to my mother’s music foremost of all. Her melodious voice was laden with gamaka and bhava, two cornerstone principles of Carnatic music that I aesthetically perceived in her voice even before I heard and understood these terms. When she sang Ela nee daya, each time the kriti seemed to be born again.

Every time there was a hitherto unheard freshness that never waned. Atana in itself is a power-laden raga. When she took off at Ra Ra Mahanubhava, after the preceding line, it swept from the undercurrents of Atana. The glory of the composition in itself was overwhelming. For seekers wedded to the lyrics, this one had particular charm, as Tyagaraja was said to have composed it upon beholding his favourite Lord Rama.

There is the constant thread of surrender, redemption, seeking the Supreme as the end of the cyclical movement of birth and death. Within this discourse there are layers. Tyagaraja does not compose only litanies, though some compositions are delightfully so. Like Hecharika ga, beckoning the deity is a master composition in Yadukulakambodhi glorifying his favourite deity.

Mundu venuka was another favourite that my mother oft coaxed me to sing. Raghunandana vegame ra ! The da-ni-pa slide in the last syllable made this phrase musically precious in Darbar. The many alliterations, repetitions, metaphors all combine to make the lyrics linger with the listener. There are elements of surprise in structure. In a seemingly simple Naadupai to a complex Pancharatna, the bard had his mastery over the art of composing.

The beauty of Tyagaraja also seems to lie in the art of condensing the essence of a raga — Kanna Tantri shows the gamut of Devamanohari, Adu Kaaradani of Manoranjani, or Vandanamu of Sahana like hundreds of other compositions. He rhapsodises over the power of music and nadopasana —the path of music towards bliss. The proximity which he enjoyed with nature comes out in the compositions that naturally extol the Kaveri-nurtured region that is the abode of Rama, of Tyagaraja and his music.

On a social note, Tyagaraja spurned kings and riches and kept his music insulated in a “music for music” and “music for bhakti” mode. “Gold or worship of Rama?” he boldly sings in the eternal Nidhi chala sukhama. He ruthlessly demolishes hypocrisy and superficial brilliance time and again in his many compositions and makes way for true devotion combined with humility. His uncha vritti ritual, was one of self-imposed austerity, of gathering daily alms while singing. He exemplified art through simplicity.

Sometimes plaintive, sometimes beckoning, sometimes woeful, at times besotted, at times angry, at times playful, satirical or simply devoted, one finds the entire panoply of emotions in the compositions to address his favourite god. Tyagaraja had achieved control over two parallel elements — composition and devotion, making his music both powerful and endearing.

His ride was not easy, as the many stories around the legend teach us, much as they tempt us into believing that greatness walks on one smooth path of glory. Can one appreciate Tyagaraja devoid of the lyrics? Many may not know the subtleties and meaning of all the songs. It is often the musical element and the virtuosity of composition that soars. So my answer would be an emphatic Obamaesque “Yes we can!”

Dr Vasumathi Badrinathan is an eminent Carnatic vocalist based in Mumbai. She can be contacted on vasu@vasumathi.net