The indie-rock band recently enthralled audiences in the capital with music from Bollywood, Hollywood with a bit of improvisation and their own music. 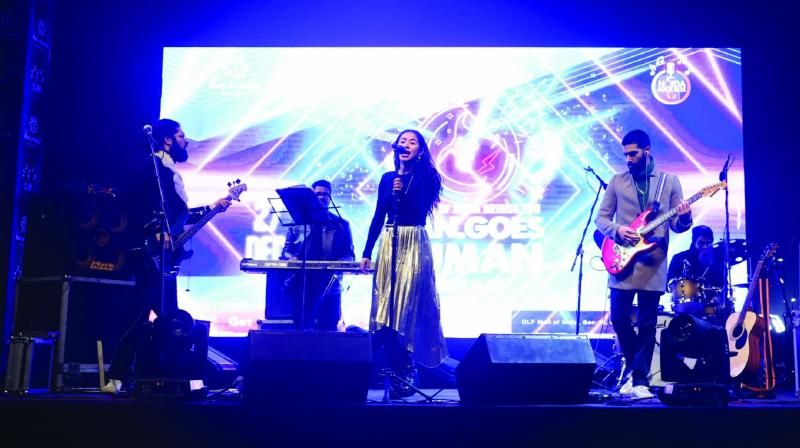 The band was recently in the national capital enthralling audiences with their music by playing hits like Shape of You, Rolling in the deep, Churaliya Hai, Yellow, Eena Meena Dika and more.

Formed in 2012, the band boasts of an ensemble of members namely; Shitij, Akshat, Sharan and Kaprila. They have performed over 200 shows nationally and internationally. They call themselves as a lo-fi indie rock band. Shitij explains, “Our music is very mellow. Even though we call it rock music, we want people to groove and sing along with us.”

They have been performing for over seven years. But to get to where they are now, they have encountered misconceptions along the way. He details, “When we say we are an indie rock band, people think we are a Hindi rock band. Though people usually ask us to play popular rock numbers — we want to propagate our music as well.” Another popular misconception is that bands are supposed to be glamorous. But that is not the case. He laughs, “We try to show that we are glamorous.”

Speaking about the band scene in Delhi, he says that it is easy to get a gig in the capital but it is difficult to make money from them. “Exposure unfortunately does not buy you food which is the problem,” he highlights.

The sound of their music is an amalgamation of genres. Apart from rock, the dabble with the blues, psychedelic and ambient. Speaking more on the mixing aspect, he opines, “When we are doing something, we are not thinking of fusing genres at all. We improvise quite a bit — we don’t stick to genres.” In terms of fusion, he feels it is ‘quite cool’ in terms of sound. “Everyone has different backgrounds so that’s where the fusion comes from,” he adds.

This rock band lays emphasis on lyrics which are deep and intense. “When we started out, we wanted to make music for ‘intelligent people’. We thought that our music was not for the masses and we thought that we would write more music for the people around us,” he explains.

While sonically simple, the deep lyrics made people go back to the track where some elements ‘might kick in’ making people relate to the music produced. To their surprise, even mass audiences understood their music. He adds, “People expect something now which will have depth.”

There is often a conflict between staying connected to your roots or evolving with the time. Shitij and his band have found a balance between the two. He explains, “We have always known what we wanted to do. The root, dream and the vision will not change. But we have keep up trends.”

So what is it like performing in Delhi as compared to performing internationally? He concludes, “We started here so we got to play here.”

— The band recently performed at Jukebox, Mall of India, Noida