In a soulful state of mind

This young vibrant band screams passion with every rendition, and is getting acclaim for the same. 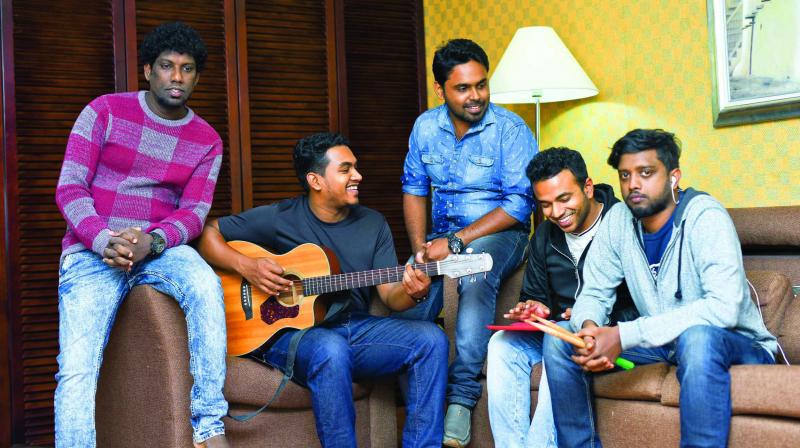 Nine years, numerous shows and a great reception – the journey of Saptak has been rocking. The Thiruvananthapram-based rock/fun band, which started off as a competition gig by a bunch of music-loving college friends has become a pan-Indian phenomenon with the five-member team performing to a vibrant, hysteric crowd. Just back from a show in the capital, Mohammed Shafnaz, the lead vocalist, fondly looks back at their formative years.

“We were students at Sree Chitra Tirunal College of Engineering when Saptak was formed in 2009. The name was perfect — denoting the seven swaras, seven colours, and seven members. Now, as years passed, it’s become a five-member line-up. But the journey has been great and satisfying.” Apart from Shafnaz, the band has Vijesh, the guitarist, who doubles up as the backing vocalist along with Gautham Ramesh, the keyboardist. Then there are Ebi at the bass guitar and Arun Kumar playing the drums. There were many line-up changes as years passed, but the spirit grew stronger.

Shafnas and Gautham are IT professionals and the rest are full-time musicians. Most of their songs fall under pop, post-rock genres. “We have been performing our version of popular film songs from Hindi, Tamil and Malayalam. We have also brought out two original songs — rock-based Khoye Yahan penned by our former guitarist Anoop Thomas and Kelkkunnu Doore, a peppy single,” he adds.

Within a short span, Saptak has carved a niche with its newfound, powerful vocal supremacy. Shafnaz explains, “What keeps us going strong is the passion. As the team members freelance with various musicians, their experience and exposure add to our quality during professional performances.”

Saptak has so far performed at various stages across the country but what shot them to fame is the 2011 show at Jawaharlal Nehru International Stadium, Kochi, where they performed during the IPL match featuring Kochi Tuskers Kerala.

Since then, there has been no looking back. College fests, competitions, professional shows, TV programmes – it’s a busy time. The profit, they say, is happiness more than money. “The band, for us, is a creative space that provides satisfying results. We all share great vibes and that’s the reason for our popularity,” he says.

Asked where their inspiration comes from, the answer is quick, “A.R. Rahman; we adore him. Most of our cover songs are his compositions.”

Saptak Band is currently working on another original composition and if all goes well, they’ll soon come up with their first music video.