Musical repertoire of SouldOut’s multi-layered music paints a contemporary picture of soul music that evolved in the 1950s and 1960s. 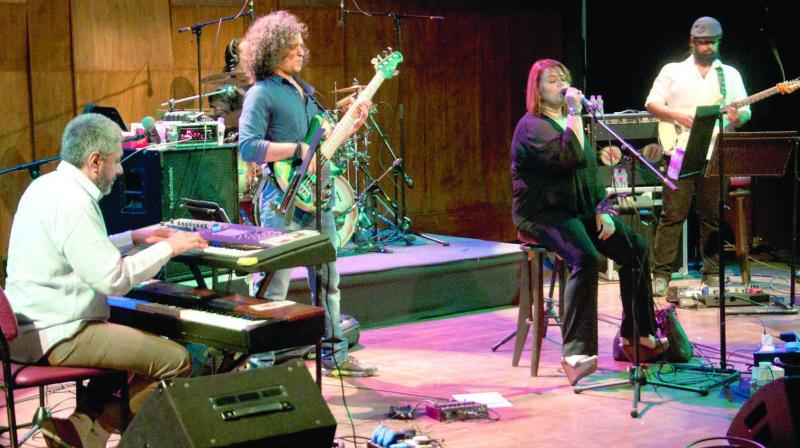 SouldOut has been playing together since 2002. According to Sonia, they never felt the need to form a formal band.

Whether you are a lifelong fan or a casual listener of soul RnB and jazz, the country’s new favourite repertoire SouldOut has plenty to offer any audience. With their soulful and uplifting music, the six-member crew recreates the profound musical experiences in a live setting. Including an array of old and new soul music by the likes of Marvin Gaye, Aretha Franklin, Earth Wine and Fire, Stevie Wonder and Chaka Khan, to name a few, the musicians have a knack for leaving the audience spellbound.

“These are the biggest names. There is a fascination about them that is omnipotent. They are brilliant musicians and one can’t escape from their greatness,” says Sonia Saigal, frontwoman and vocalist for the group. She grew up listening to these musicians, and is fascinated with their music. “Their music touches your soul and that’s what we want to do with our group. As musicians, we will always try to make soulful music like them,” reveals the singer.

Fed with a lot of creative and musical energy, SouldOut’s multi-layered music paints a contemporary picture of the soul music that evolved in 1950 and 1960 as popular African-American music.

Mumbai-based SouldOut has been playing together since 2002. According to Sonia, they never felt the need to form a formal band, and their bond was created th-rough friendship and music. “The band wasn’t really formed. We have been friends for a long time and there was no situation that inspired us to form a band as such,” confesses the singer, and reveals that all the members have played together at different points in time.

“When the opportunity would come up, I would instantly think of my musician friends and would go ahead. That’s how we work,” gushes the vocalist. “Our relation as musicians is based on friendship and understanding of each other’s musical capabilities. Everything just falls in place when we go on stage and start performing,” she adds.

However, working in a group of creative people can bring up disagreements, and Sonia’s group is no exception. “We all have opinions and suggestions, but we all sit together to discuss what works and what doesn’t. We make sure we are on the same page before we commence anything,” the singer explains.

At the time when traditional music around the world is being performed in fusion, SouldOut keeps distance from the idea. “I’m not very keen on a fusion music. I respect all kinds of music, but I am not sure if I would like to venture into fusion music,” Sonia says, adding that as of now she wants to concentrate on the kind of music she likes to perform.

“I want to stay true to what I love. But if any fusion opportunity comes up, I will consider it,” she concludes.