Heading a family of six grandchildren and six great grandchildren, she is the bearer and caretaker of Panditji’s legacy. 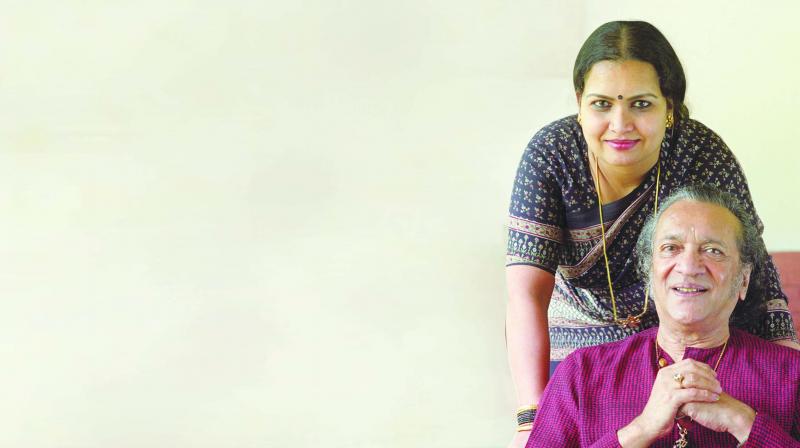 Continuing an active interest in the sprawling Ravi Shankar Centre she inherited in the heart of Delhi’s diplomatic area, Sukanyaji oversees the annual RIMPA festival held there, in Pt Ravi Shankar’s name.

I am working towards Pandit Ravi Shankar’s 100th birth centenary which is next year and don’t have much time for myself now, the late maestro’s wife Sukanya Shankar tells music writer Shailaja Khanna close on the heels of his 99th birth anniversary. Heading a family of six grandchildren and six great grandchildren, she is the bearer and caretaker of Panditji’s legacy.

Pandit Ravi Shankar’s 99th birth anniversary was on April 7. Remembering her legendary husband, who was also a recipient of the Bharat Ratna, Sukanya Shankar reluctantly agreed to share her precious memories with him. Though not a practising musician or active organiser of music events, Sukanyaji commands an unparalleled position in the world of Indian classical music. “Chinamma” (Little Mother) to the music fraternity, she moves between London, Delhi, Chennai and the United States and is welcomed in every musical forum. Continuing an active interest in the sprawling Ravi Shankar Centre she inherited in the heart of Delhi’s diplomatic area, Sukanyaji oversees the annual RIMPA festival held there, in Pt Ravi Shankar’s name.

In a nostalgic mood, with Panditji’s 99th birth anniversary in April reminding her afresh of his legacy, Sukanya is loath to talk about herself, (“who is interested in me” she says). Truly, she is modest and self-deprecating. Also highly intelligent and articulate, she is a pleasure to interact with. Some excerpts from an informal chat:

Tell us about your early life — where were you born, your siblings…
I was born in Agra as my father was in the Army and he was posted in many places. I came from a Brahmin family where music and arts were a way of life. My father was from Trichy and my mother from Trivandrum. They were Tamilians settled in Kerala. My mother came from a very musical family and my great great grandfather was the court musician of Maharaja Swati Tirunal. 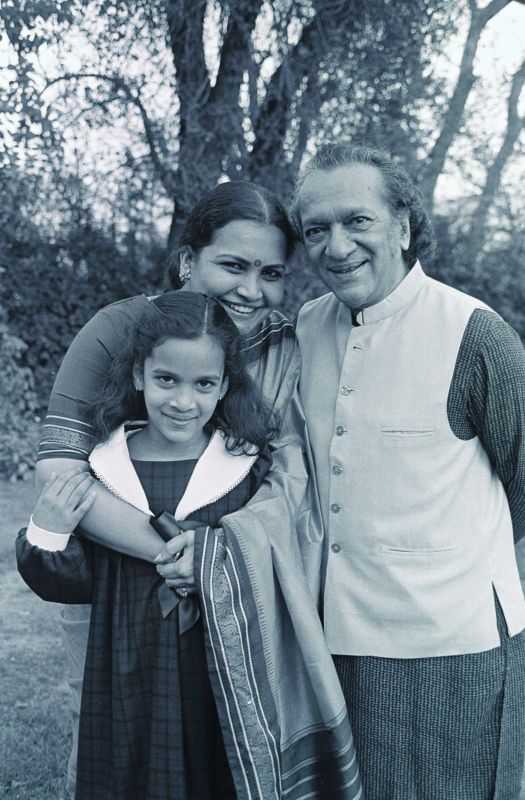 I was trained in Carnatic music and Bharatnatyam. My grandmother and the great Rukmini Arundale were first cousins, so I spent a lot of time at the Theosophical Society with Rukmini Amma and her brothers and sisters. My mother and all of us, sisters and brothers, were animal lovers and so was Rukmini Amma. I had the great fortune of having some of the greatest musicians and dancers visit my house while I was growing up.

My mother sang and played the veena, also painted. She was a great storyteller who would sit with us in the evenings and tell the stories of Ramayana and Mahabharata and a beautiful lady who loved and saved all creatures, even scorpions and snakes!!

Where did you first meet Panditji, tell us about your life with him.
I first heard Guruji when I was about 10 years old at the Music Academy in Chennai. I met him in London in 1972. I was a close friend of his niece Viji and she asked if I would play the tanpura for him at the Royal Albert Hall. I didn’t even dream that I would meet him in person. When I met him for the first time in Charles Street, London, I was in such awe that I even forgot to do pranam to him, until I heard Lakshmi Aunty, Viji’s mother, nudge me and say, “Namaskaram pannudi!” I fumbled and touched his feet! 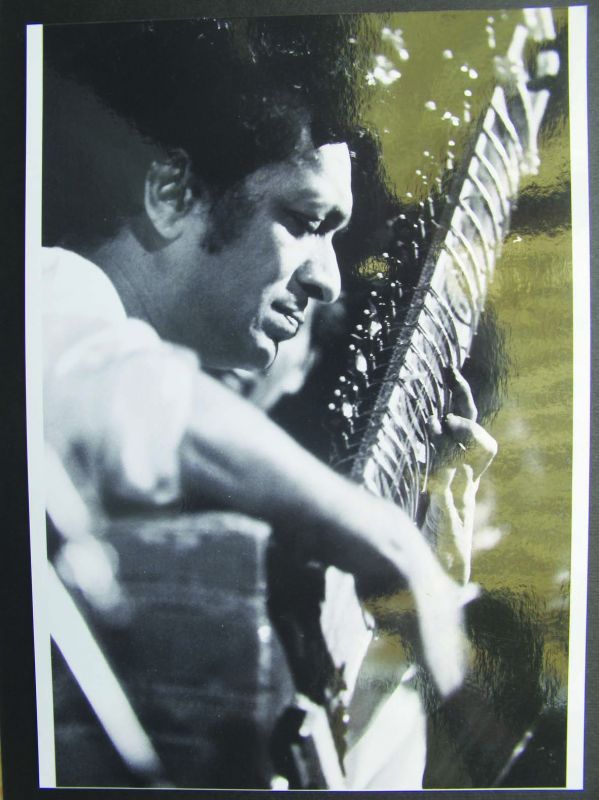 My life with him was amazing. He was the most wonderful, caring and loving husband. In the 40 years I knew him, he never spoke a harsh word and on the rare occasion if he sounded a little irritated, he would apologise so much and show how much he cared. He was always so encouraging and appreciated even the smallest things I did. Towards the last two decades of his life, he entrusted everything to me. I was his barber, his cook, his nurse, his manicurist, his pedicurist, but the best part was that we laughed so much and had such a wonderful time. He was so funny, he made me laugh so much and brought out the best in me.

He appreciated even the smallest thing I did for him... he complimented me several times a day, he would always hold my hand anywhere... even if we went just for a short ride in the car or a walk in the garden.

How did you spend your leisure hours together?
Well, he was a film buff and would watch these old black and white English movies... I got to enjoy them eventually... We really had so much fun that I was never tempted to go anywhere without him. Even if I went to the office to work in the house, he would phone and say how much he missed me! He was a great carrom board player... he was a big cheat when he played cards and would laugh when I got upset.

Another thing was cooking. I love to cook! Guruji loved my food and towards the end only wanted to eat my food. I even started to take a hot plate, a rice cooker and a couple of pans on tours and would cook for him in the hotel suites. He loved to come back from concerts and eat home food! Both our daughters, Norah and Anoushka and my grandchildren love my cooking. What else can I ask for in life!

We have a little dog, Suki, who has just turned 13 years old. She is very, very dear to us. Guruji loved her dearly and she travelled with us everywhere, on the flight, on the tour bus to concert halls and she even went on stage sometimes to take the last bow.

What do you think is his biggest contribution to Indian classical music?
It would probably be easier to say what he did not contribute!!! He was the one who put Indian music on the world map. So many people have said that they knew about India because of him. He was and is the most famous Indian musician even today!!

A few weeks ago when I arrived in San Diego, the immigration officer looked at my passport and said, “so you are the Mrs Shankar!” and when I said yes he said, “I salute your husband, welcome ma’am!!” My eyes were damp. I come across so many incidents like this and I realise how many millions of people he has touched!

Today it is easy with all the public media and advertisements, etc., you just have to look at Facebook and see every musician posting about all their achievements, but in those days without all this, he became like a rockstar. He has had 18 honorary doctorates and every big award from all over the world and yet he would say that didn’t make him a better musician. He was humility personified in the true sense. He worked so hard to give a proper platform to Indian music. He walked away from universities when our music was called “ethnic”. He said the term, world music, would be more appropriate. He set standards for music and music presentation. Tell me, which musician is not influenced by him? Most acknowledge this thankfully. Guruji was an all-rounder, a voracious reader, a film buff of old classical black-and-white movies from the West and he had so much humour in him. He was kind and generous and has done so much for all his disciples. He has such disciples who are all doing so well now. I could go on and on.

Who do you think embodies his musical legacy best?
Both his daughters do, and so do many of his disciples. Why do you think you still have such a standing in the world of Indian classical music even so many years after him. That’s because he is very much with me even now. I don’t take a single step forward without his blessings… it’s not me at all, it is all the work he has done and all the love he has showered on people that I am loved and respected. I am so grateful for that… his dwelling is my temple, he is my god, my lover, my friend and guide and my service to him and his work are my prayers.

Lets talk about you. Which cities do you most enjoy living in?
Those days I would say, “I could live in Timbuktu, as long as Guruji was with me.” Now I spend more time wherever my grandkids are. I like to spend a lot of time in London as Anoushka lives there with her two kids.  I am blessed to have a large family with Raviji. I have six grandchildren and six great grandchildren who are all very close to me and I try to spend as much time as possible. I also have two sisters and through them a nephew and two nieces. I like to spend some time in Delhi, but unfortunately, every time I come to Delhi, I end up falling sick with the pollution. I hope that gets better as India is so beautiful.

What are your hobbies? Typically, how do you spend your day?
Unfortunately, I don’t have much time for myself now as I am still involved with all the work of Guruji, the archives, the recording company, etc. Every day is different. I am an early riser and on my toes until late night. Now I am working towards his 100th birth centenary, which is next year.