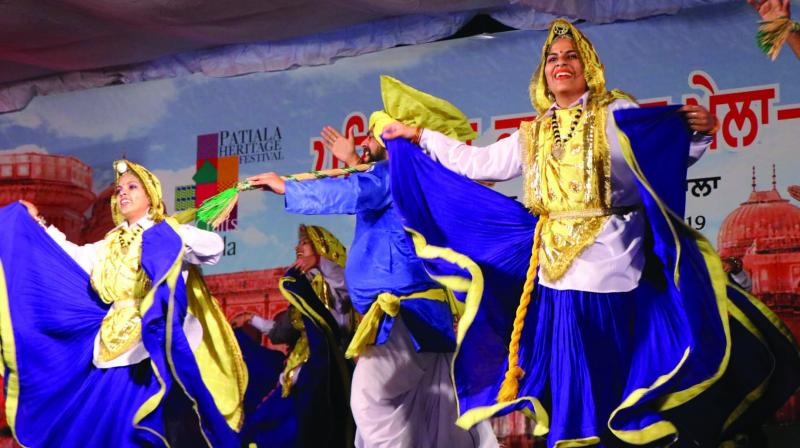 The Patiala Heritage Festival has featured the nation’s finest artists – from Ustad Vilayat Khan to Yamini Krishnamurthy. The tradition of excellence continued in this week long edition of the festival; with the spectacular backdrop of the lit Qilla Mubarak, the artists seemed inspired to give their best. The first evening featured Pts Rajan Sajan Mishra; their immense popularity in Patiala gauged by the fact that they were invited a second time in a row. The 2nd evening featured Odissi dancer Parwati Datta and her troupe. The 3rd evening started with a bang with the uplifting dhrupad vocal recital of Ustad Wasifuddin Dagar, accompanied on the pakhawaj by Pt Mohan Lal Sharma. Having no other accompaniment other than the drone of his two tamburas which he carries to every concert, Dagar sahib created an ambience of a bygone time, in that setting of yore. Despite being heckled at the end of his concert by an inebriated listener to sing “Basant”, (the Raga of Spring) the Ustad did not lose his cool but obliged with a brief rendition of Basant. Sadly the rain came down in droves and the eagerly awaited concert of the three brothers Ustad Nishat Khan on sitar Ustad Irshad Khan on the surbahar and Ustad Wajahat Khan on the sarod could not take place. This would have been the first time they performed together in North India. Their busy schedules did not enable a shift to the next day. Ustad Nishat Khan said “I am so disappointed; I have been wanting to play in Patiala forever.” Younger brother Wajahat shared that he had played in Patiala years ago at the same festival with his late father, Ustad Imrat Khan.

The third day featured Patiala’s pride, Kaushiki Chakravorty. Patiala’s royals came out in full force to welcome their icon; she did not disappoint, singing with passion and flair, bringing out every part of her awesome vocal arsenal to totally mesmerize. She was followed by the dance act entitled Fire by Priti Patel, who has skillfully incorporated elements of martial arts into her presentation of Manipuri dance.

Pt Vishwamohan Bhatt with the Manganiyars started proceedings the next day, followed by Bharatanatyam by Rama Vaidyanathan who presented a new act entitled “Ek Omkaar” (the mantra of the Sikh Japji sahib) as a tribute to the Patialavis. Rama later shared that she had been working on presenting a verse of Baba Bulle Shah but it “needed work on it”.

Ammy Virk and Jasbir Jassi were the attractions the next day; the grand finale of the event was a spectacular sound and light drama on Guru Nanak at Moti bagh Palace.

The Heritage Festival of course revolved around the evening music and dance performances but equally important were the other activities of the festival – the heritage walk in the morning showcased the beautiful buildings of princely Patiala. Every Princely state had beautiful State buildings – the Durbar Hall, cenotaphs, State religious centres (in most cases 2 or 3, of different religious denominations) and of course the Palaces.

Patiala has its share of magnificent buildings – the 14th century  Qila Mubarak, though badly in need of renovation remains a grand structure – the superb miniature style paintings on the walls of the State rooms, of Shri Krishna and Shri Rama testimony to the expansive vision of the Sikh rulers.

The Crafts Mela held in the moat of the Sheesh Mahal, another grand edifice, brought to the locals the best the country has to offer; there was even ware from Turkey.

The morning air show at the Patiala aerodrome had a largely youthful audience of school children who were brought in to see the display of flying of drones and miniature air craft, followed by a stunt biking display.

The band of the Guards regiment (2 Guards) provided aural accompaniment to the display of military like aerial manoeuvers.