Actor Amol Palekar recounts his time with the doyenne while documenting her life story in the documentary, Bhinna Shadja. 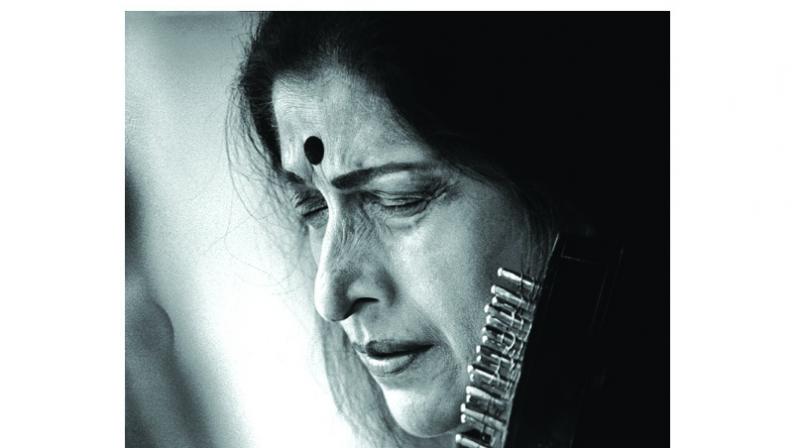 To begin with, it sounds very funny but I never thought of making this documentary; it was Kishoritai who asked me to make it. She insisted that I would be the right person to make a documentary on her. She made the suggestion at the tail end of a telephone conversation that I had had with her on how one must preserve the treasure that she possessed in the form of the Jaipur Gharana’s music and mustn’t let it fritter away. However, I took time to respond to the suggestion. But one day, she called me up and, in accordance with her unique temperament, reprimanded for not having responded yet. She had said, “Who that hell do you think you are? How dare you not even respond to my request?” To which I meekly said that my intention was not to insult her. In fact, I wanted to meet her in person and share few apprehensions regarding the film. Then my wife Sandhya (Gokhale) and I went and sat down with her and articulated the reasons for not having responded immediately.

First and foremost, there had been many attempts to make a documentary on her by many seniors, and nothing had succeeded in the past. So being fully aware of that, I didn’t want to get into something that I might not have been able to achieve. That was my biggest apprehension. Secondly, I said whatever documentaries I had seen on musicians in particular, had mostly left me unsatisfied. I thought they were superficial and had not gone into the depth of the artiste in many ways. So I said, if that is how a documentary is made, then it doesn’t excite me.

After hearing me out, she showed immense faith in me and insisted that I’d be the only one who could do justice. After still being hesitant, to my embarrassment, she asked in her typical tai way, if she needed to make me a request in writing. And that’s how it began. It was nothing but sheer pleasure; and the entire journey, which took us almost one-and-a-half to two years to finish, was extremely enriching.

I gained a lot from observing her from close quarters. The most fascinating part for me was her capacity to question, dissect, and analyse musical thought. For example, there are certain rules in a gharana where dos and don’ts are clearly defined. The unique quality in her is that she would accept the rules, but she would also ask ‘why?’ And then her entire journey would be to get into the real core of the idea. She was also open about broadening one’s own perspectives by going beyond their own gharanas unlike today, when most artistes don’t like to exchange ideas with other gharanas.

Although she spoke from the perspective of music, I would like to believe that it could be applied to any other art form. As an artiste, to see her wanting to cross hurdles and seek perfection was an extremely fulfilling experience for me.

While making the film, I also got to know the humane side of the great legend. Often, we associate her with the often talked about idiosyncrasies — her ill temper, her tantrums, and so on. But during the film, she offered Sandhya and me a glimpse into her fears and apprehensions as an individual. She opened up the vulnerable side of the creative mind that she was. It was simply a privilege and I would forever be grateful to her for allowing us to get so close to her. I was a fanatic of her music. We had travelled to almost all parts of the country to attend her concerts. In Maharashtra, I have attended almost all of her concerts. In fact, she had invited me to compere the first function that she had organised to celebrate the first anniversary of Mogubai (her mother and teacher).

I have come to believe through my own journey as an artiste, in our country particularly, we tend to invest more time and energy in gossip and side-stories and often associate artistes with their idiosyncrasies. We end up making the artiste an icon and put him or her on a pedestal, and just leave them there. But as an individual and an artiste, I tried to avoid going that way, and chose to demystify the process; and the understanding of the craft or efforts behind the art and how one finds the answers to the unknown, and the delight that one gets to gain the knowledge are more to my liking. Kishoritai and me were on the same plane on that note.

Once, during shooting we had travelled together to her native place, and we wanted her to relive some things. That was another fascinating experience for me. I don’t think we need to speak on her craft and the disciplinarian that she was. However, I think it will suffice to say that the way she passed away speaks volumes. The fact that she was more famous for her tantrums, and considered to be rude, and often would be criticised for not being satisfied, when compared to how peacefully she passed away in her sleep, would show the deeply satisfied person that she was.