Susmit Sen on the rocks!

A tete-e-tete with the founder of The Susmit Sen Chronicle and co-founder of Indian ocean. 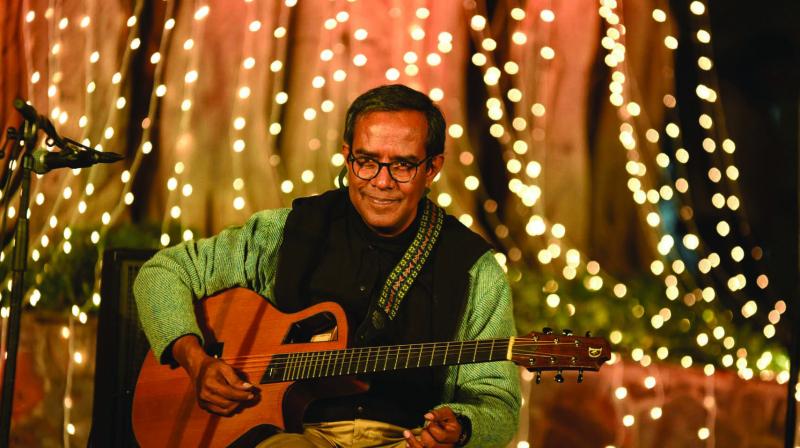 The process of story-telling has reached another level with my composition — Susmit Sen.

People who may or may not be trained musicians at times realise, and are known to  say that life is grey if there is no tint of music in it. The bird chirping, the river rippling, the child crying, each sound seems to form a rhythmic composition for one who has the dedication to listen to them. Susmit being a self-taught Indian fusion and rock guitarist and also a brillant performer shares  with us his journey...

Talking about his journey Susmit shares, “I find it difficult to summarise my 30 years of music. I found Indian Ocean in 1990, the only pan Indian band writing original music. Indian Ocean toured more than 20 countries, produced seven albums over two decades and played a kind of music that was never heard before, an Indian expression using mostly Western instruments.” Leaving Home – the Life & Music of Indian Ocean (2010), the band founded by Susmit Sen along with Asheem Chakravarty,  became the first band ever in India to be the subject of a documentary. At the 58th National Film Awards, the documentary went on to win the Award for Best Arts/Cultural Film. “I parted ways with Indian Ocean five and a half years ago and started The Susmit Sen Chronicles and I have been performing as a duo and trio collaborating with Melanie Hardage on piano and Nandit Desai on the drums and I will continue to innovate with my style”, he adds.

Susmit Sen’s first guitar was one purchased by his dad for his senior sibling in Mumbai. He had been impacted by his sibling’s capacity to pull in consideration by playing the guitar. But a musician is not a stagnant pond. Speaking about the change in his music over the years, the musician voices, “I think age and experience always helps to enhance one’s style over the years. Technically speaking, I have improved over the years with my own style of guitar playing and the process of story-telling has reached another level with my compositions.”

Music plays different roles in each individual’s life. For this musician, it is a form of self expression. But, a low phase in life is a common scenario for any professional. Especially, if one is in the field of any creative art form, frustration can lead to a complete blank phase in an artist’s life. Luckily, it was not the same with Susmit.