Music festivals to look forward to

There are several multi genre festivals taking place in various cities in February. 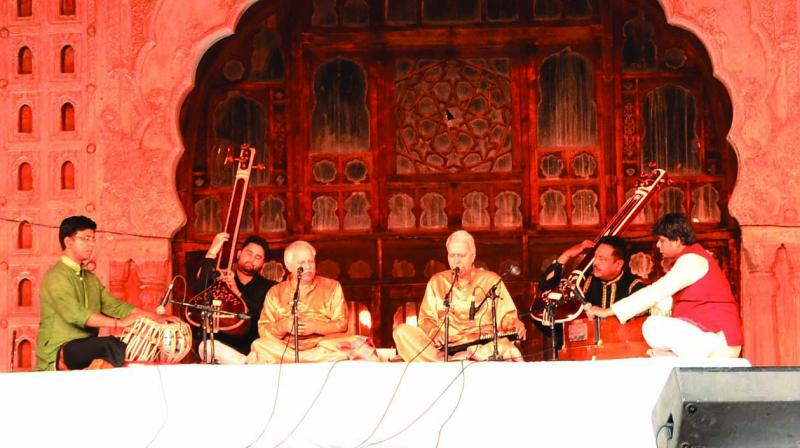 The memorial is being organized by the Shri Achaleshwar Mahadev Temple Foundation, Dala near Banaras.

On Basant Panchami, forgotten musical legend Nayak Baiju is being remembered in the fairyland town of Chanderi. Sadly today, Baiju Bawra is mainly remembered by the 1950s film made on him, which depicted him as a “bawra” (crazy). Though not much is known about him historically, musicians’ perception of Baiju Nayak is quite different. A “nayak”, he was a master of all four streams of music– sur, (melody) laya, (rhythm) nritya (dance) and sahitya (literature). It is said he was a disciple of Swami Haridas of Vrindavan, and was born and died in Chanderi on Basant Panchami.

The memorial is being organized by the Shri Achaleshwar Mahadev Temple Foundation, Dala near Banaras, and this year is the 4th edition. Chandra Prakash Tiwari, the organizer said, “today Tansen is a household name, as he lives on through his disciples, but Nayak Baiju is scarcely remembered. I want his “Samadhi” (tomb) in Chanderi to become a place of pilgrimage for musicians. There are so many compositions attributed to him that are sung even today.” The memorial to Baiju Bawra on 10th February will feature a discussion of his work, plus a talk on his lost tradition by several eminent thinkers. This will be followed by a dhrupad concert by Ustad Wasifuddin Dagar, torchbearer of the 19th generation line of musicians of the Dagars, descended from Swami Haridas. Ustad Wasifuddin Dagar has also recorded several Nayak Baiju dhrupads in different Ragas. He will also be presented with the 4th Baiju Bawra Memorial award.

The 4th edition of the Udaipur World Music Festival will take place in Udaipur from 15-17th February. Sanjiv Bhargava of Seher has meticulously structured a festival that will have mass appeal with musicians from different musical genres and countries including Europe, Iran and Indonesia. There are different venues for the concerts adding to the exotic attraction of the event. For Indian classical music aficionados, there will be recitals by rising star Manjusha Patil, Carnatic flautist Shashank, and quawalli by Chand Afzal. Shashank verbalized his excitement at performing “Carnatic music, which is one of the greatest systems of music. I am happy that the Udaipur festival always presents recitals of both North and South Indian music; music is universal.”

Yet another city in Rajasthan, Jodhpur will host the 12th edition of the World Sacred Spirit Festival from 22-24th Feb at Mehrangarh Fort. As usual, there will be a bevy of international artists from Argentina Iran China Mongolia Sweden Scotland France Spain Anatolia and Algeria, in addition of course to India. The Indian artists include Ustad Shujaat Khan on the sitar, and violinists Dr L Subramaniam and his son Ambi.

The Patiala Heritage festival will be held from 19- 24th February. Though musically today Punjab is linked with robust Bhangra pop; the strong classical music tradition of this region is old. Interestingly, all 10 Sikh Gurus were trained musicians, in addition to being spiritual leaders. All the daily prayers in the Guru Granth Sahib that are recited at dawn, and dusk (except the Japji Sahib) are in Raga. One of the most prolific gharanas of vocal music is the Patiala gharana, whose stalwart Ustad Bade Ghulam Ali Khan till today remains one of the most revered musicians. The festival will include Punjabi food, display of crafts, and heritage walks in addition to the music and dance festival.

There are several venues – the grand 18th century Qila Mubarak’s stone walls will be lit up to provide a backdrop to the music and dance items, the Sheesh Mahal will host the crafts mela, the Motibagh Palace will be the backdrop of a grand Sound and Light show on Guru Nanak’s life. The music on offer includes an unusual musical trio of brothers Ustad Nishat Khan on sitar, Ustad Irshad Khan on surbahar and Ustad Wajahat Khan on sarod. All of them are from one of the premier instrumental gharanas, the Etawah gharana.

Another huge draw is the stunningly talented Kaushiki Chakravorty, appropriately of the Patiala gharana. The diva bubbled “I am so excited to perform in Patiala, as I feel such a link with the place through my music. It is incredible never to have been there and yet my identity all over the world is through Patiala”. Incidentally, her father Pt Ajoy Chakravorty’s music school in Kolkata is training over 1000 students in the Patiala style.

Amongst other attractions, there will also be performances by Pandits Rajan Sajan Mishra of Banaras, dance ballet “Krishna” performed by Shriram Bharatiya Kala Kendra and Priti Patel with her troupe of dancers from Manipur who will perform in an act entitled “Fire”.