The Revisit Project is all about paying tribute to distinguished musicians and unmasking a new rendition of some of their best hits. 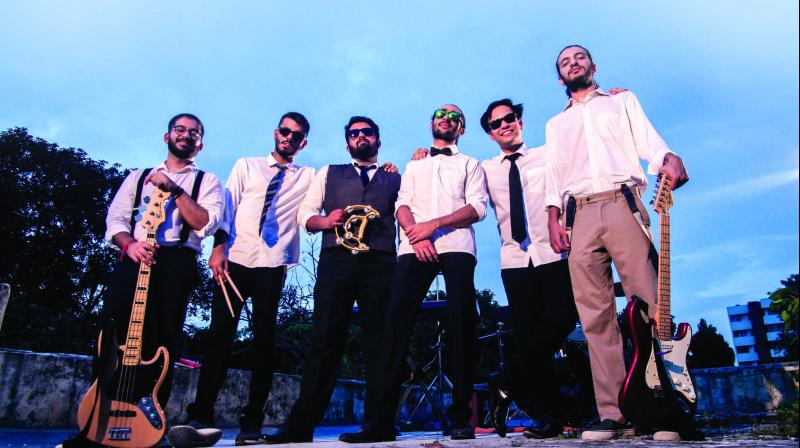 With Abhay Sharma as the saxophonist, Abhijit Sood the drummer, Raaed Ehsaan Azim the keyboard player, Karan Wadhwa the bass player, Varun Rajasekharan the percussionist and Kanu Gangahar the guitarist; the band The Revisit Project is moving forward with their second album now. The band has a motive — to explore more and give the audience a newer version or taste of these songs, while keeping them all hooked and nostalgic.

About how the band was formed, Abhay Sharma says, “This was basically an idea that I had because I wanted to bring back many lost treasures in terms of lost music, and Western music as well. The initial plan was to get that back in a much more contemporary arrangement but at the same time moving on to a part where the band had to come together as a progressive unit. The next plan was to create original music. Even then, our music, though contemporary, was influenced by jazz, funk, blues, electronic music, western music, classical music and so a lot of these elements came together, and now the band is a full pronged unit. We give a tribute to music produced earlier and are bringing a lot of funk into our current music. The actual genre of funk music has not even started properly in India and people unfortunately haven't experienced it.” Forming a band is not easy but Abhay Sharma formed it easily as his college friends were ready to embark on this journey.

“When you think of a band as such and the music you have to play, then it is a different ball game altogether. I used to play in a band earlier and I was not happy, I realised that what I actually like to play are these old Indian melodies. I had to arrange it in such a way that it counts, I feel one should learn from music. The only way one can learn from music is by improvising and not being pretentious. I love music and that is why I play in this band, and it is not because I want it to look cool. The concept is to learn and feel open to all kinds of music. Sufi music is being heavily destroyed in a city like Delhi where people are faking it. I don’t want to name anyone but the music played is pathetic at times. I had this idea of forming a band because my father used to talk about this idea. Unfortunately he passed away in 2013, and in 2014, I realised I want to genuinely do this and take this forward. I called my friends from college — five of us. We started making new arrangements of old melodies and are enjoying it till now and in the future as well,” he adds.

Feeling very optimistic about the way the band has formed, he holds on to something special.

“My experience with the band has been great, and constantly interesting, due to the various challenges we have encountered over these few years. Be it trying to do justice to the legendary composers, or trying to make our own music sound better, it constantly keeps you on the edge. We have now started working on our second album, which is going to be majorly influenced by funk music. To make our music sound personal, we all have our methods. I bring in the Carnatic rhythm influence which I have grown up on, while Abhay writes songs about what he relates to on a personal level, and so on. All the members contribute in their own unique manner, which renders a personality to the song,” says Varun Rajasekharan.

The band seems like a group of people who are hardworking and innovative. Thoroughly passionate about good music, the band seems to have a great sense of unity.

“My experience with the band in the past four years has been amazing, starting off with writing arrangements and revisiting songs with everlasting melodies from Indian film music. We wrote a full length album called Here we go earlier this year in March and recording it was a unique experience as every song was recorded live with all members playing at the same time,” says Abhijit Sood. Evidently enjoying himself while creating good music, Sood is passionate about his contribution.

“The last few songs we have been working on for the second album are going to be a funk-influenced record as the first album was sonically very diverse, and influenced by various genres. We plan to release it in early 2019 and are really looking forward to sharing the music with everyone. We are a unique blend of Western and Indian music peppered with south Indian percussive elements with a very groove-based funk vibe. With vocals being introduced in some songs in the second album, we are quite intrigued to find out how it will all come together,” he signs off.