A rainbow of music and poetry

Even as they blend Kashmiri and Urdu poetry with music, Sufi rock band Alif believes that music transcends all languages. 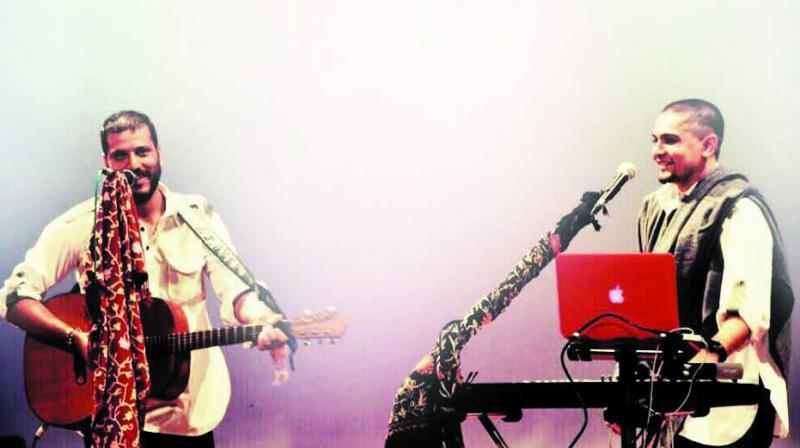 Music is an instrument used by musicians to touch people’s hearts. However, Muhammed Muneem believes that music comes second only to poetry. This is why, despite being classified as a Sufi rock band by his audiences, the lead vocalist of Alif insists that his band ‘writes Urdu and Kashmiri poetry’ and gives music to it. The band’s first album Sufayed also reflects this sentiment, with the music often being interspersed with poetry.

Even while he was studying for an MBA degree, Muneem was sure that he wanted to go into the creative arts. “Poetry has always driven me, and I formed Highway 61 with my friends in 2008. Later I felt like I wanted to focus on Urdu and Kashmiri poetry and hence Alif was born,” he recalls. While the rest of the band members have changed over the years, the core team of Muneem and keyboard player Hardik Vaghela, has remained the same. The band has now added percussions maverick Karan Chitra Deshmukh on drums and Amit Gadgil on bass. The band fuses Sufi poetry and music with more modern rock riffs.

In Sufi music, you have a combination of languages — so it is for Alif’s songs. “Since I was born and brought up in Kashmir, it was an obvious choice for me. Urdu is a language that lends itself to poetry. So, these are the languages that dominate our songs,” explains Muneem.

Having released quite a few singles and played at several festivals, it was only a matter of time before the band released its first album. Sufayed, which released earlier this year, is the perfect embodiment of the band’s philosophy. “Sufayed means white. We took the concept of Newton’s colour wheel — when a rainbow is spun fast, it takes on the colour white. So the songs in Sufayed form a varied bouquet. Every song reflects a different story — some are fun and upbeat, some are on social issues, some reflect some deep emotion,” he explains. For instance, their song Aladin traces the iconic fairytale, giving it a fun, slightly ironic treatment, while their first song Ali traces the uplifting power of faith in God.

The dominance of Kashmiri in the songs could have created a more niche audience for the band, but Muneem is confident that ultimately it is the power of music that touches the soul, irrespective of language. “When you are painting, you use the colours at your disposal to create something that will touch the heart of the viewer. While the techniques may be different, the colours used are the same. The results are different each time. So, it is for music —  the song needs to create some kind of emotion. Just take the Tamil version of A. R. Rahman’s Dil Se. No one can remain unmoved when listening to the song,” he says.

Another benefit of using Kashmiri, though, is the fact that the band now has a following in Kashmir. “It was right after we got featured on Kappa TV in Kerala. It was both surprising and humbling for us,” he recalls.

Now, with their album up in iTunes and other commercial platforms, the band is looking to broaden its horizons. “We are thinking of a global tour, since the sufi music scene is quite an international one. If things work according to plan, then some of Sufayed’s songs may also go into the Bollywood industry. For now though, we are concentrating on doing one gig at a time, and hoping for the best,” he signs off.