The violinists duo recently enthralled the capital with their music that boasted of an amalgam of Indian classical and Balkan music. 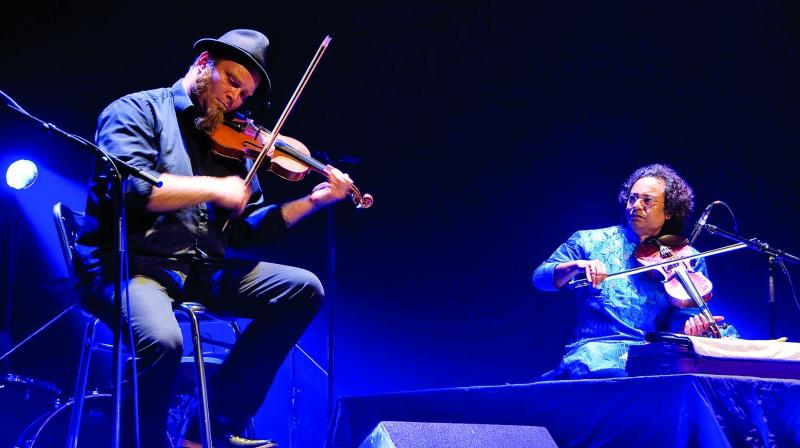 The reason why the violin is one of the strongest instruments in an orchestra is because it is the closest to human voice.  And the same is true for the group – Violin Nomads. The group was a result of an encounter between two violinists–  Rupam Ghosh and Antoine Marhem. Later, vibraphonist Eric Navet and percussionist Antoine Morineau joined in. Together their work has the taal of Indian music with sophistication of eastern European music.

The quartet recently enthralled audiences in the capital at Alliance Française de Delhi. Rupam Ghosh talking about his love for violin says, “The pathos and romance that a violin can produce cannot be replicated by any other instrument.”       While Indian and European music styles  are different, they do possess similarities.

Though they have performed across the world, a sense of nervousness is still there. He explains further, “While playing with them (other members), it is hard to comprehend when to stop and start.” But on the other hand, he believes that nerves makes a performance stronger. He says, “If you don’t have the nerves, the desire to do better fades.” But French violinist, Antoine Marhem feels a different kind of energy. He adds, “I’m very excited to play! I’m happy to come on stage and see the audience experience our music.”

The singular effort of these two musicians to the bridge the two worlds. He adds, “This is a journey for us that goes via Europe and comes to India.” But for Ghosh, performing in India can become daunting.  He explains, “We play the same music that we listen to. I know that if I make a mistake, people would catch it. But abroad, I don’t feel scared.”

Marhem believes that performing in India is a different experience altogether. He expresses, “People in India listen to different kinds of music. The country as whole is very spiritual and open-minded.

So what matters more – Audience loving  the music or the artiste’s own happiness? Marhem opines that there has to be balance of both. He adds, “When I play at concerts, the public likes what I play. But I’m not very happy because I tell myself I can do better. But there have been times where only one thing that matters to him. For me it is important for the audience to be happy.”