My Story My Song

This opera concert takes you through the devastating turn of events in Australia towards its aboriginal community. 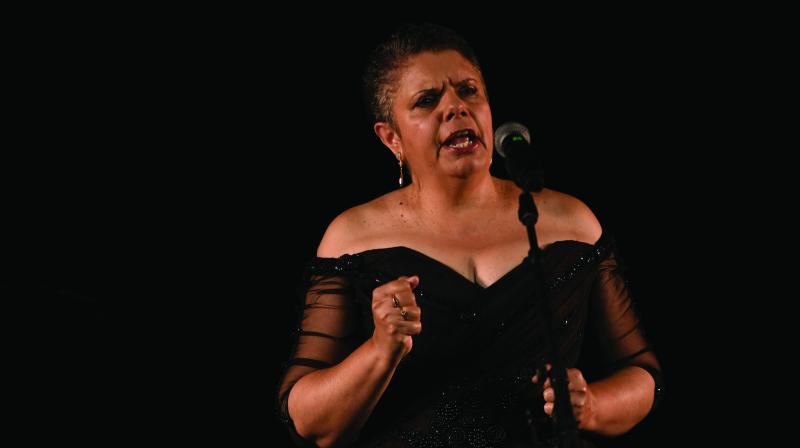 Rubiks Collective - a contemporary music collective from Melbourne comprising Tamara Kohler (co-artistic director and flute player), Kaylie Melville (percussion) and Natasha Fearnside too performed. On the piano was Toni Lalich accompanied by tabla maestro Pt. Ashis Sengupta. The concert marked the premiere of Deborah’s latest composition — Woven Song: Article 27. This evocative work, written for the soprano, tabla, woodwinds, percussion and piano, is a setting of the 27th Article of the Universal Declaration of Human Rights and was inspired by the art and language of Pintupi artist Nanyuma Napangati

Opera, like any other art form, is used as a medium to express human emotion and feelings.

Being part of Australia Fest, High Commissio-ner of Australia to India Harinder Sidhu, elaborates “The fact that we can bring artistic activities into India that are in English is very helpful.”

According to her, opera may seem a long way from the ordinary Indian, but the human story expressed through opera is a universal story. She feels both Indians and Australians have a long tradition of storytelling.

For Deborah, Songs of Belonging weaves together areas from the great operatic tradition of the 19th and 20th century.  “With music from a much older tradition it reveals my own personal journey to find my belonging as Yorta Yorta woman and a member of the Stolen Generations,” she says.

The story behind the show was Deborah’s quest to discover her.  Belonging to the aboriginal community, she was taken away from her biological mother at the age of three. She was adopted by a white Baptist family post separation. She grew up at a time when aboriginals were forbidden to talk in their native language.

Opera to Deborah means everything. She says, “I think opera is the means by which you could amplify a story. Music intensifies everything - emotion, story, moments. Music can intensify the feeling people receive.”

She was very young when she fell in love with opera. Deborah recalls how she felt when asked to explain about an opera she attended at Sydney Opera House. “My breath was taken away. I wondered to myself how could something like this exist and I didn’t know about it. I sat there and it was like an entire world been open to me. I was swept away by the voice of Joan Sutherland.” Opera fascinates her.

Deborah wrote her first song ten years ago. She says this year she celebrated her 40th anniversary of opera. According to her opera always has a potential story to move and elevate you. “It’s like a ceremony where I can enter into a relationship with a composer who is dead a long time ago.

I can enter into relationship with a composer who has written something beautiful many years ago,” she explains, adding a singer spends most of his/her life crafting his or her voice to be able to deliver.

Her journey as being the first aboriginal opera singer in Australia has been anything but easy, considering the time and phase Australia was in. “My journey has had many challenges,” she says, adding that till date she hasn’t got an opportunity to sing with any major opera company in Australia despite performing all over the world.

She points out coloured people are seldom accepted as sopranos even today.

She has set up a non-profit company - Short Black Opera - for people with colour. For her it is important to serve one’s art and be truthful. “You can’t go in there for ego or for reward,” she
advises.

Despite being one of the most successful opera singers in Australia, success hasn’t affected her. Knowing yourself, she says, is the greatest and the most precious gift in life.