The ’90s child’s favourite music hub, Razzberry Rhinoceros, is making a comeback with an evolved model. Can it match the legacy? 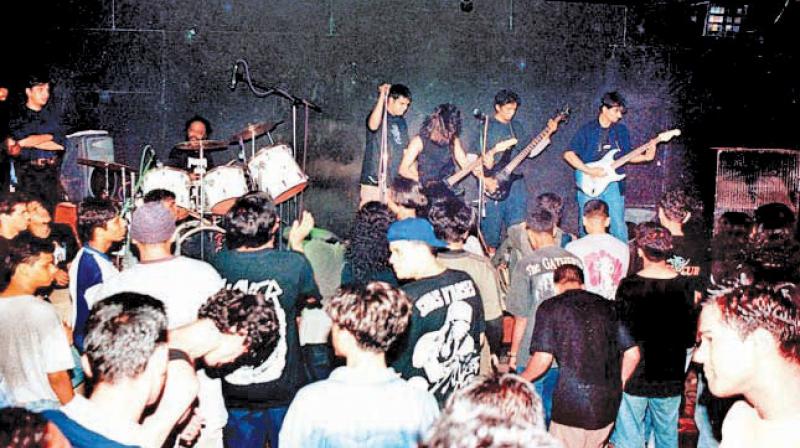 A band performing in Razzberry Rhinoceros in the 2000s.

Neeren Tewari doesn’t feel the need to think too hard to recollect the live music scene of the ’90s — a lot of it transpired in a dingy but active space going by the name Razzberry Rhinoceros. Calling it one of the pioneers of live music back then, Neeren has fond memories of the place where homegrown bands kept the evening alive and the audience grooving. Razz, as he affectionately calls the restaurant, was ‘the’ hangout place in Juhu.

“Back when I used to come to Razz, it was a live music space bursting the most popular kind of music of the ’90s. From rock and (some) jazz to metal and trance — there was everything played here,” recalls Neeren.

When the space shut shop for live gigs in 2002, much to the dismay of its loyal patrons, they continued to serve as a banquet hall. The house once played host to some of the big names today.  Popular metal band Bhayanak Maut played their first gig ever here; British-Asian favourite Apache Indian played some of his most popular bhangra-reggae mix; guitarist Warren Mendonsa, drummer Gino Banks and vocalist-guitarist Sahil Makhija, indie electronic homeboy Nikhil Chinapa helped set electronic music foundations by introducing their music in his venue.

Making a comeback with the Piccadily Group, Razzberry finally opened its doors two weeks ago. Brothers Neeren and Nitin Tewari, both veterans in the food and beverage industry, run the venue as directors today. Neeren observes that 15 years later, the music and the audience have both evolved, and so, revamping Razzberry hasn’t been an easy task. “With music choices and preferences of patrons having changed now, we have also worked towards evolving the space. When working on it, we often imagined how it would be if Razzberry had never shut and how it would have evolved for the generation today,” he explains.

The brothers plan to add a lot more to Razzberry’s credit than just live music. “We don’t want people to just come in when we have live music gigs going on,” explains Neeren further adding that one cannot have just one USP when doing a business. “And so, we are organising movie screening nights, where we will be screening movies out on the deck in the evenings under the skies, we will also be hosting workout sessions like zumba and yoga, and even some other workshops.”

Today, Razzberry is comprised of five different spaces — the bistro, the patio, the Razz bar, the deck and the coffee shop. The brothers deem this as a second home. “You can hold business meetings here, come for a romantic sundowner dinner, or even a workout session — we even have that now!”

That said, the duo is cautious to keep the soul of Razzberry alive — music. As was the case with the original Razzberry in the ’90s, they are keen on lending their space to upcoming bands with potential. “Giving upcoming bands a stage has been Razzberry’s forte and we want to continue with the legacy,” Neeren tells us.