Entertainment   Music  03 Apr 2017  A musical festival like no other
Entertainment, Music

The Bhilwara group, though spread essentially in Rajasthan and Himachal Pradesh, has its corporate office in Noida. 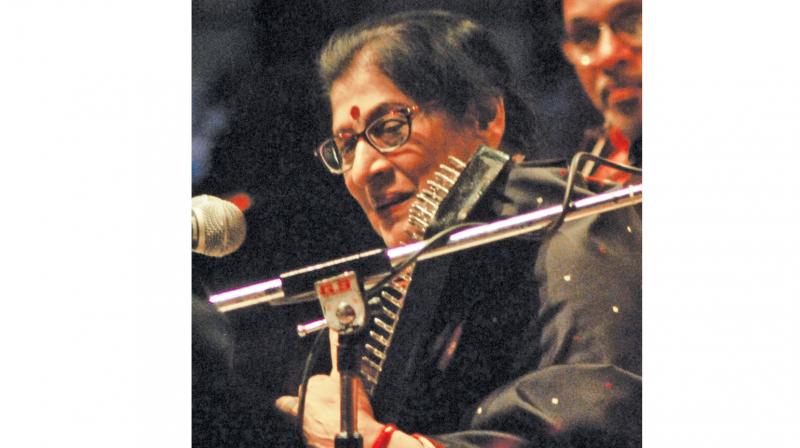 The Bhilwara festival concluded with a grand performance by Ganasaraswati Kishori Amonkar.

In its sixth edition this year, the two-day Bhilwara group classical music festival was held at Delhi’s Kamani Auditorium, to packed halls. The Bhilwara group, though spread essentially in Rajasthan and Himachal Pradesh, has its corporate office in Noida, so the music festival is held in Delhi.

Founder of the group, L.N. Jhunjhunwala spoke of his connect with music since the early 1940s, when, in Calcutta, as a student he was fascinated by the Dhrupad tradition and took lessons from the legendary Ustad N. Moinuddin Dagar, part of the duo known in the music world as the Senior Dagar Brothers. The fascination with the discipline required in pursuing this ancient and rigid tradition remained with the industrialist, through the years he continued to pursue music as a hobby, learning from Ustad N. Moinuddin Dagar’s younger brother Ustad N. Faiyazuddin Dagar, in Delhi, and after his death, from his son Ustad F. Wasifuddin Dagar.

The interest in music was transferred to both his children, who learnt music as a hobby. Today, Rishabh Jhunjhunwala, his grandson, is very musical, and is learning music. Babuji as he is lovingly known, said, “I remember once feeling connected with the Almighty, listening to the Ustad sing in Calcutta; he was on a different plane, and this connection transferred even to us three or four listeners. I realise now, an achievement in business can never give you the type of satisfaction and fulfilment music or the pursuit of a strong academic subject can give you”. This, from an extraordinary man who has established a multi-crore business empire from scratch; he set up the first factory of the group in 1961!

The first day featured Ustad F. Wasifuddin Dagar, torchbearer of the gharana; indeed the finest singer in this genre today. Dhrupad gayeki has huge restrictions in terms of embellishments, and “barhat”; it is awe inspiring to see how the young master has totally sublimated the limitations in the excellence of his performance. His concerts are virile and engaging with appropriate injections in the concerts of drama, pauses and slow sweeping glides, as well as complex “gamaks”. His immense voice control has to be heard to be experienced. After his opening Raga Shree, the grandeur of which was beautifully captured, he sang Raga Kamboji on request, and then Raga Durga. He said, “My links with the Jhunjhunwala family go back to before I was even born; it is wonderful how an industrialist like Babuji has such a deep connection with music that it can touch and heal him, the way we professional musicians are affected by it. He has passed on his love to his children and grandchildren. That’s why the festival is organised in such a relaxed way; they have a soft, muted approach to things, not flashy. Indeed laudable.”

After him was Pt Buddhaditya Mukherjee, the senior-most sitar player of his generation. Playing in Delhi after a gap of about four years, the maestro was overwhelmed with the audience response who gave him three standing ovations – the first after his first piece (a vilambit gat in Raga Aiman Kalyan played on the sitar with great deliberation), then after his second piece on the surbahar (a sombre aalap in the late night Raga Malkaus, in which his “meend” taans in the “jor” portion were truly stupendous) and finally at the end of the concert. (He ended with Raga Kafi on the sitar.) His wonderful sense of proportion at all stages of the performance is praiseworthy. As he said later, “After experiencing the wonderful, integrated ambience of the vast and kind audience, I felt that over the years of their unique and dedicated efforts in presenting Indian classical music, the LNJ Bhilwara Group has successfully created a unique audience, that can easily ignite passion in any artist to want to reach greater heights of musical expression. Playing for them has been a very fulfilling experience for me. Their wholesome belief in their artists automatically makes us feel totally responsible towards the concert.”

The finale of the festival was the grand old lady of the North Indian vocal idiom — the unparalleled “Ganasaraswati” Kishori Amonkar. Regal in her trademark black and maroon sari, totally absorbed in her singing, Kishoriji is indeed the last of an earlier generation of musicians whose whole life, literally, was music.

The legendary singer was accompanied by her senior disciple Nandini Bedekar, granddaughter Tejashree, and as a delightful later entrant, Pt Raghunandan Pansikar. The voices in unison create an unforgettable ambience; the meticulous building up of a picture of the Raga with “sur” instead of colours is unique to the doyenne. The careful exploration of the raga, the different combinations and permutations, the slow build up of the tempo — all are part of the impeccable Jaipur Attrauli vocal tradition that never fails to impress.

Her breathtaking “taans”, though now fewer, continue to dazzle even now, when she is in her eighties. After Raga Puriya Dhanashri, and a brief interval, she concluded with Raga Kausi Kanhra, a combination of two ragas, Malkaus and Kanhra. It was a delight to see her surrounded by her several students and musicians after the concert. It was touching to hear her request her audience to continue to invite her to Delhi to perform after the grand concert.