A concert series, Women of Rhythm gives female percussionists a chance to prove their mettle and enjoy the spotlight. 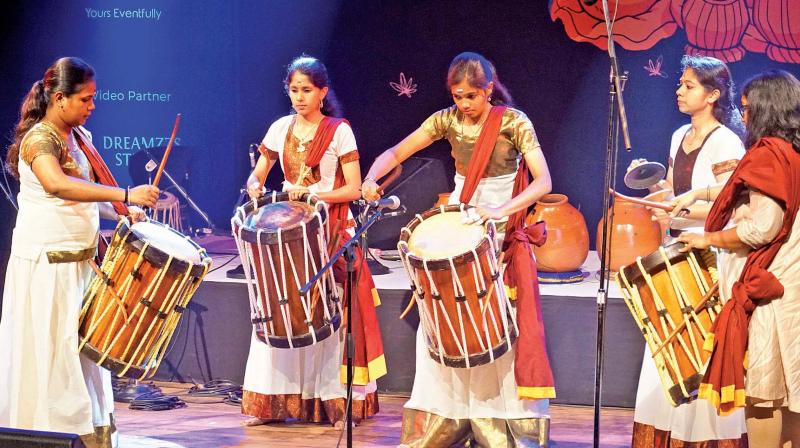 The Krishnadas Sisters with their chenda ensemble.

From the tabla in Uttar Pradesh to the reverberating chenda in Kerala, the sub-continent has its own indigenous variety of pulsating percussions. However, these instruments have been gender socialised and are considered to belong to a man’s domain. Realising this sexism in the field of music, the co-organisers of India’s first and only festival for female percussionists, Women of Rhythm, Aditya Prabhu and Sonia Acharya, brought their third edition of the concert to the city on Friday.

The duo, who organises India’s only percussion-based concert Dumru Rhythm Festival, realised that since its inception, not a single female percussionist was featured in the concert. Perhaps to amend the mistake, the duo launched Women of Rhythm in 2016 as an alternate platform for path-breaking female percussionists of India. However, according to Aditya the point of the concert is not to highlight the gender divide in the world of percussion but to inform the audience about talented female percussionists.

“Having a festival only for women is not empowering, because they are already empowered. But the young talent that’s available inspires me. The entire goal behind this is that the girls who play percussion should be known as percussionists and artists, and not female percussionists and female artists. Why get a gender in the middle?” propounds Aditya. He reveals that the Women of Rhythm will be active till 2020, and then become a part of Dumru Rhythm Festival where the ratio of men and women will be equal.

The third leg of the concert series saw Shrishty Patidar and Siddhi Shah on drums, Charu Hariharan on mridangam, Krishnadas Sisters on chenda, Sukkanya Ramgopal and Sumana Chandrashekhar on ghatam, and Neesha Mokal and Mukta Raste on tabla.

The star attraction of the concert was the revered Sukkanya Ramgopal. As the first woman to play ghatam, she recalls how on attending her mridangam guru Shri Vikku Vinayakram’s concert, she fell in love with the sawaal-jawaab of the mridangam and ghatam. Although she was eager to learn the instrument, her guru was hesitant to teach her. “He told me, you are a girl, your fingers will get spoilt, you are playing mridangam very well and I can teach you to become a very good player. But I was not at all convinced,” recalls Sukkanya. She also recalls an incident where a certain mridangam player did not want her as an accompanist. In a resolution to bring her skill into focus, Sukkanya invented ‘Ghata Taranga’, which is a unique way of playing six to seven ghatams of different notes by a single player, contarary to different players in the traditional ‘Ghatamala’. She also launched an all-female ensemble Stree Taal Taranga to give a platform to other female musicians like her. Despite the success of her platform, the talented musician sometimes wonders: “If Ghata Taranga was invented by a man, would it not have reached a better position.”

The other inspiring performers of the night, the chenda thumping Krishnadas Sisters, daughters of famous chenda player Krishnadas, also had to convince their father to allow them to learn the instrument. Shobhita, along with Rahitha says, “When we started, we did not get many programs from the northern side of Kerala, and they said that you are girls, so you could not do this, and kept us away.” Even though the girls still face resistance in the northern part of the state, they have not only proven their talent by winning multiple awards at youth festivals, but also by commanding a female–revolution in chenda playing, which is mostly dominated by men.

With such talent on display, one wonders why female percussionists are not considered to be on par with their male counterparts. One popular argument suggests that the female body lacks the endurance required to play these instruments. However, Charu Hariharan, the mridangam player shuns this baseless argument. “It isn’t about the body, it is about the technique. Technique is what takes least effort and most power, and that’s possible in any instrument, and that only comes from practice,” she concludes.