I had my first kiss in Delhi, says Anoushka Shankar

Anoushka Shankar talks about her recent album, her fond memories of India, importance of her dad’s music in modern times, etc. 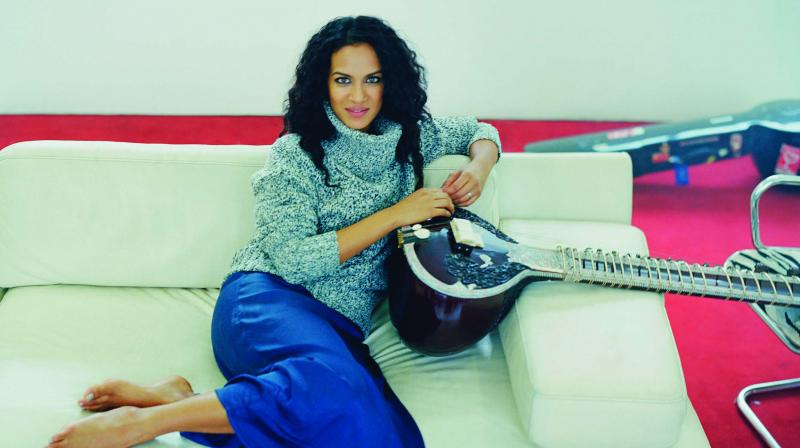 Anoushka Shankar has recently come out with her new album Land Of Gold. Her promotional tour is being curated by Alchemist Marketing Solutions and supported by Panache Media. (Photo: Jamie James Medina)

Pandit Ravi Shankar was 61 when Anoushka was born. And by 14, she was touring the world with him. Though she missed a lot of schooling,  the virtuoso sitarist and award-winning musician, who will be touring India with her new album Land Of Gold this whole month, says she is satisfied with her life. She speaks about her father, her fond memories of India and more.

As a musician who has composed and collaborated across genres of music, how do you perceive the importance of your father’s work in current times?
I can’t put my finger on the importance. However, I can say that he was the first person from the East to cross over, exposing the western world to the sounds of India. A decade before his association with George Harrison, he already had a strong career in the classical world. What he did (at that time) was he started working with other musicians and taught them how to play Indian music. I think that was unique. I think the timing was the key for what he did, and the point was more about exposure to  the eastern world.

You have not only been carrying forward the legacy of your father but also working towards creating your own niche. How do you manage that?
It was very challenging. I was very young when I started, and at that time, there was a lot for me, as a teenager, to figure out. During my teenage years, and through my twenties, I kept trying to find myself, as a person, and as an artiste. The one thing that I always did was to be honest as an  artiste, and to be myself. That helped me through the whole process  because I never tried to escape my father’s legacy. He is my father and  my guru, so there’s no point trying to escape that. That would be denying who I am. But, at the same time, that wasn’t all that I was. When you are  someone’s disciple, you are not just that, you are also an individual artiste. I have always felt very comfortable with that identity. I think that  helped me to not have to prove myself so much. Also, I always felt like I  was carrying my culture with me, and that was more valid than simply living in a particular country or dressing a certain way. Those aren’t the  things that define a culture to me. What people carry, and what people  bring, and what people share — those are the powerful things that enrich  our lives to me. There is so much expected of — and perceived about —  me in England and India. In England, there’s such a huge diaspora of Indians living there. In India, being my dad’s daughter, there was a strong mould that was expected of me. It’s almost harder to have that mould to live up to. Because you either fit in, or you don’t, and I never felt  comfortable.

Who has been your greatest inspiration besides your father?
Strong emotions compel me to write music. In the case of Land of Gold, I was watching the refugee crisis unfold and started writing music in  response to the trauma I was seeing millions of people going through. It became an album about universal human emotions and connection.

You met your husband Joe Wright in India when he was here researching a film, and you were visiting family. Tell us something about how involved he is with your music.
Funnily enough, Joe was the one who had to convince me to allow him to  co-produce Land Of Gold! He loves music deeply and it was an ambition  of his to work on an album. After a while, I came around when I remembered how much I’d always loved his musical ideas and opinions.

Coming back to your latest album and the India tour...How is this album different from Home and Traces of You?
It’s similar to past albums, and different too. While it’s cross-over like most of my last albums, it’s again very electronic, which I have avoided on the last few of my records. I really focused on taking the sitar out of it’s comfort zone. The album isn’t exotic in a way that’s often associated with the sitar. My instrument gets to be wild and be angry along with being loving and tender.

Lastly, could you share any fond memories of India and Indian cities?
India is one of the places I call home, and also where my roots are. So it’s hard to pick out memories as if I had just come on one or two trips. I lived and went to school in Delhi for several years and Delhi remained a base for me all through my teenage years and twenties. I also have a  relationship with Kolkata and Chennai due to my Bengali and Tamilian  parents. Then, of course, Mumbai is where I have so many friends from the world of art. And in Bengaluru, I have my family. Goa is where I spent so  many winters. So, how to pick a memory! But still, here are some random ones that are probably lesser known as they aren’t written about all the  time: I launched my book about my father in New Delhi when I was 20. It was also the first time that Manish Arora custom-made clothes for me. I felt like a princess and felt so proud to have released a book of my own writing. In Goa, around the turn of the millennium, I used to be able to go completely incognito and could really be free with my friends and let my hair down. Dancing is one of my favourite things in the world.  I had my first kiss in New Delhi when I was 12, with a boy from my class who I had an insane crush on. We’re still friends today. My father used to get especially nostalgic whenever we came to Mumbai for a concert. Everywhere we drove he was constantly pointing out the locations of beautiful memories from his past. I loved hearing the stories that used to surface.