An Adivasi’s ode to Mahatma Gandhi

The songs performed by this tribal community draw commonalities between the wisdom of the Adivasi and the quest of Mahatma Gandhi. 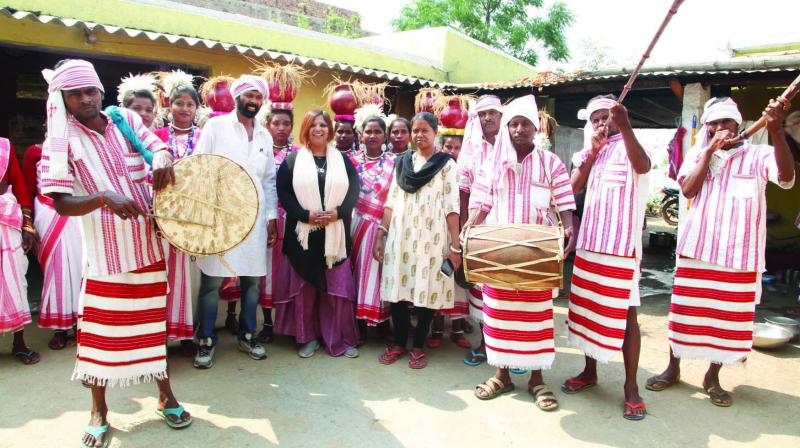 The group who takes inspiration from Gandhi, includes his philosophy and their everyday struggles in their music.

For many millennia, tribal communities in India have lived with the Gandhian ideals of respect for all creation, harmonious and sustainable co-existence with the universe — a nurturing, rather than exploitative, worldview. It is a society based on consensual participation over domination and subjugation. It is no wonder, therefore, that the Mahatma finds a place in the songs and culture of Adivasis across the country. One such community to celebrate Mahatma even today is the Adivasis from Jharkhand, who do so in their two liner songs.

“We present folk songs which are set around Gandhi’s teachings and values. At a time when the community doesn’t even have basic necessities like food, shelter, roads and electricity, these singers are still positive and worship the Gandhian philosophy,” says Megha Sriram Dalton, a playback singer and composer who is revered for her song Dheere Dheere for Coke Studio. Megha, along with 12 Adivasi singers, will be performing Johar Gandhibaba at Mumbai’s NCPA’s 50th year celebration, to mark the 150th birth anniversary of Mahatma Gandhi.

The group who takes inspiration from Gandhi, includes his philosophy and their everyday struggles in their music.

Talking about their musical performances, Megha informs that her team intends to pay tribute to Gandhi’s ideals. They will do it with songs from the tribal community, as his ideologies and messages are known to have resonated deeply with their culture. “People have forgotten the values and teachings of Gandhi, but these communities have imbibed them all and they follow it everyday in their lives through songs,” explains Megha.

Interestingly, apart from Megha, none of the performers are trained in any kind of music. She says that coordinating with them and bringing them into a formal setting is a challenging task. “They all are tribals, and haven’t learnt singing anywhere. They work in the fields during the day and sing at night at the akhara (an entertainment place) adjoining every tribal house,” reveals the singer, adding, “I am scared at times, but I trust their singing. They might not be good technically, but they have singing and playing skills. They are singing what they experience everyday and we do a lot of rehearsals,” she reveals.

Along with tribal music, which they play with traditional instruments, their presentation also include Western instruments like the violin and piano, for a touch of fusion. “These songs can mix with any instrument. The melody will remain authentic and, since the tribal community doesn’t have many string instruments, we have to play with these,” Megha shares.

We are following a complete traditional way of performing the Adivasi music,” explains the composer.