MLV Amma, as she is fondly called, was a remarkable musician. She is credited with striding the Carnatic music arena like a Colossus. 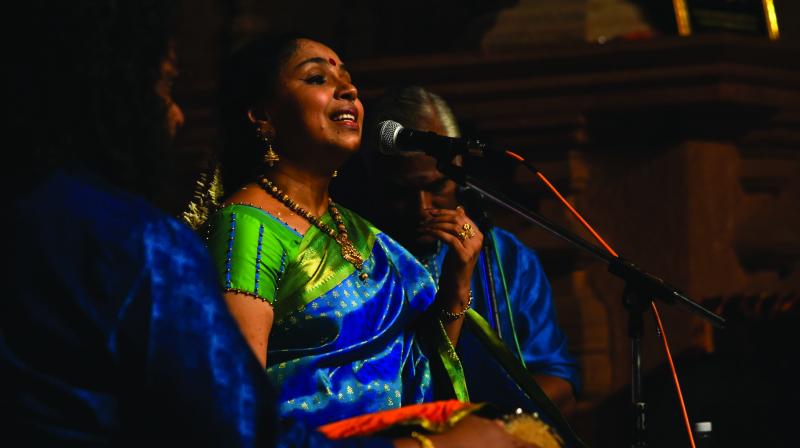 The old Ustads used to say, one lives on thorough the music of one’s disciples and it is God’s grace to get a good disciple to carry forward the legacy. This is certainly true in the case of Padma Bhushan M.L. Vasantha Kumari, universally known as MLV. Though she died 28 years ago, in 1990, her memory is being celebrated by her most prominent disciple Padma Bhushan Sudha Raghunathan on the anniversary of what would have been her 90th birthday on 3rd July, at the Madras Academy in Chennai.

In a memorial starting at 4pm, the entire evening will see concerts by many of her disciples; an audio visual entitled The Maiden of Spring”, the release of a commemorative stamp, and release of a souvenir  “MLV 90” by the Defence  Minister, Smt Nirmala Sitharaman. The evening will conclude with a duet by Vidushi Sudha Ragunathan and danseuse Rama Vaidyanathan, incidentally also a Sangeet Natak Akademi awardee for 2017.

MLV Amma as she is fondly called was a remarkable musician – she started her career in 1941 at the age of 12, and thereafter strode the Carnatic music arena like a Colossus. She was a rare musician who attained stardom early on, and maintained it right through her life, according to Chitravina maestro, Ravikiran. She taught several top ranking artists including Padma Bhushan Trichur V Ramachandran, (though he primarily learnt from MLV Amma’s Guru, the legendary GN Balasubramanium) violinist Padma Shri A Kanyakumari, and her senior most disciple Charumathi Ramachandran. Interestingly, a testimony of her prowess as a Guru, she is the only Carnatic musician to have two Padma Bhushan awardees as her disciples, as well as a Padma Shri awardee.

In addition she made her mark as a playback singer in movies. Accolades poured in too – in 1977, she became the youngest woman at 49 to receive the pinnacle for a Carnatic musician, the Sangita Kalanidhi awarded by The Music Academy. The Padma Bhushan and Sangeet Natak Akademi awards were also hers.

Performing at a time, between the 1950s-1990s when male musicians dominated the world of music, MLV along with DK Pattammal and MS Subbulakshmi, due to their extraordinary talent, managed to carve a niche for themselves in the world of Carnatic music. Despite being the youngest of the trio, according to musicians, MLV was perhaps musically the most adventurous.

She ventured into uncharted areas with aplomb; her innate confidence perhaps the result of musical learning in past lives. As Sudha Raghunathan puts it “in my 13 years of having trained under her, I never once heard her rehearse before a concert. On stage she was so daring and her confidence was unimaginable. She was truly a genius. The intricate “ulti paltis”, “gamakas”, so perfectly executed…I could go on”. In the words of veena maestro Chitravina Ravikiran, himself an extraordinary musican “her concerts were like an African safari; full of surprises, as natural as could be, magnificent and breathtaking”.  He continued, clearly in awe of the doyen, “like the most creative virtuosos, she decided what she wanted to present just an instant before she sang it, which is the reason why she was both spectacular and substantial.”

Apparently, as a person she was as daring and courageous in life, as she was as a musician. She took challenges head on and would overcome all troubles that came her way in droves. She was large hearted and magnanimous; her music reflected her personality. As Chitravina Ravikiran puts it “I remember Pt Ravi Shankar once saying to me, you can hide your aspects of her personality and nature from people, but you cannot hide your traits in your music. What you are comes out in your music.”

Indeed MLV’s music was as grand and imaginative as she herself was as a person. No one who knew her had anything negative to say about her.

Sudha Raghunathan reminisced “She truly taught me how to live life. Also, how to deal with organisers, how to present on stage. She never took her audience for granted; she was very close to her fans, she had an instinctive connect with people, the continuity of her relationship with her followers mattered to her. If she had sung at someone’s wedding, she would naturally and automatically think to enquire about the couple when she next met the parents. Hers was an innate warmth that was neither superficial nor put on”.

Another invaluable attribute was her enormous learning. She reveled in presenting unusual Ragas; she believed in constantly surprising her listeners. As Sudha Raghunathan puts it “She would render the most rare Ragas with such finesse”.

A complete musician, MLV Amma was versatile, knowledgeable, in total control of her voice and laya, and in addition innately creative. In the words of Sudha Raghunathan “MLV Amma will always be the undisputed Empress of Carnatic music for me”.