Bombay Jayashri Ramnath rose to the occasion as always; her performance was measured, masterly and innovative. 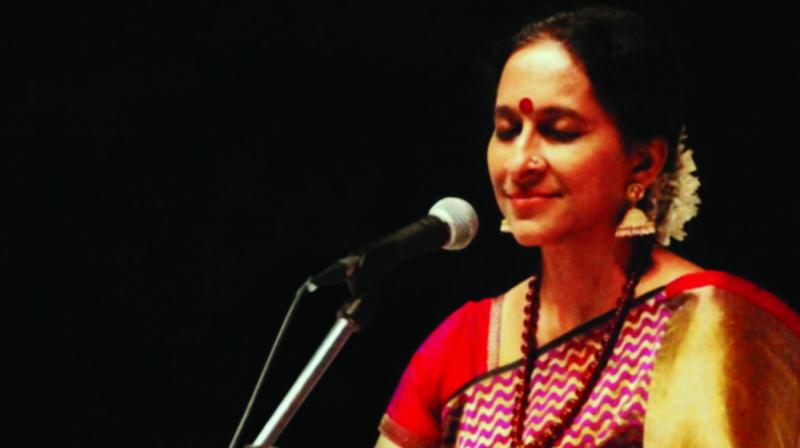 It is always a pleasure to hear Carnatic music in the North — the music on offer has a subtle difference, and this is due not only to the brevity of the concert in comparison to the traditional three-hour concert in the south. Somehow an intelligent artist understands the different musical sensibility of the audience in the north, and the concert is structured accordingly, in terms of ragas, musical content, and presentation. One suspects performing in the north for a Carnatic musician offers the challenge of prolonging the usual six-10-minute pieces to a more expansive presentation; but also is simpler as one does not need to delve deep into one’s repertoire to present rare compositions. Also, the audience is comparatively less critical and judgmental.

Coimbatore-based Rajyalakshmi Fine Arts, run by Dubai-based surgeon, Dr Satish Kumar, is a prolific organiser of musical events, primarily in Coimbatore but also in West Asia and the US. This is their first venture in North India in collaboration with the Delhi-based Indira Gandhi National Centre for the Arts (IGNCA). IGNCA has nine regional centres, including one in Baroda. This collaboration had the additional logistic support from the National Academy of Indian Railways (Nair). Nair’s beautiful auditorium set in a 50 acre property, part of the erstwhile palace of the Baroda Crown Prince, was the best venue for classical music, set as it was amidst greenery and the odd peacock pottering in the grounds.

Bombay Jayashri Ramnath rose to the occasion as always; her performance was measured, masterly and innovative. Her physical presence dominates her concerts, but once she starts singing, it’s only about the music. She started with Raga Lalita; a composition by Muthuswamy Dikshitar “Hiranmayeem Lakshmim” — this composition has an interesting story behind it. Apparently the composer’s wife complained about their lack of finances, and her difficulties; in distress Dikshitar composed this piece as an appeal to Lakshmi Devi, the Goddess of wealth. Legend has it the Goddess was pleased; the roof opened, and he was showered with a cascade of gold coins.

Moving on to more familiar notes for the Baroda listeners, Raga Jaijaiwanti in the north (called Dwijawanti in the south), Jayashri sang a longer than usual preamble, and then sang Muthuswami Dikshitar’s “Akhilandeshwari”. Keeping the mood contemplative, gentle and heartfelt, there was no attempt to display her vocal virtuosity. The lyrical Raga Bihag (another raga imported into the Carnatic pantheon from the north) was next, her ever popular “Irakkam Varaamal”, a plea to Lord Shiva for mercy. The next piece was the main piece, a “ragam thanam pallavi”. It is sad that in North Indian classical music, one hears this traditional unfolding of the raga without percussion aid, only in the dhrupad tradition, as aalap, or by instrumentalists, in aalap jor jhala. The equivalent by khayal singers, in their vilambit (slow) offering is not the same in terms of structure.

The raga was Mohanakalyani, which to a northern listener is Raga Shudha Kalyan. Jayashri’s “Pallavi” (composition) was self-composed, an ode to Shri Krishna. The focus in this piece was on drawing out every nuance from every note, on a leisurely exploration of the contours of the raga, which was immensely satisfying. To have a lasting impact, classical music must soothe rather than cerebrally challenge one’s mind, or draw admiration for one’s technical control and mastery. Of course it goes without saying that without having mastery over one’s voice or instrument, one is unable to create any impact at all.

The next piece in Raga Huseni was “Eppadi Manam”, composed by Arunachala Kavirayar, in which a pleading Sita asks Lord Rama how he could think of deserting her to go to the forest alone. Again Jayashri surpassed herself in expressing the emotions of this composition. Her rendering proved that it is the music that coveys the mood; lyrics only add to it. Despite singing in languages incomprehensible to the Baroda audience, the appeal was unmistakable.

The mood changed totally with Jayashri’s usual ending, a racy pulsating “thillana” (tarana in the Hindustani tradition) — what was different this time was, for the first time she sang a “thillana” mala — 3 “thillanas” in three ragas — Kapi, Hameerikalyan and Tilang, all ragas completely familiar in the north. A stunned audience was immobile for a second before rising in a simultaneous standing ovation and prolonged applause. Jayashri’s music has a certain meditative quality, enhanced by her molten voice and unerring choice of repertoire, suitable to her audience. For any vocalist to win over Baroda listeners is a feat; two generations of listeners have heard the finest vocalists for nearly 100 years, starting of course with the unmatched Ustad Faiyaz Khan (Barode-wale), whose grave lies forgotten in the city.

Jayashri was accompanied by one of the finest violinists of our times, Sangeet Natak Akademi awardee H.N. Bhaskar, whose interpretation of ragas is profound and expansive. On the mridangam was Delhi Sairam, on the khanjira, B.S. Purushottam. She shared that singing in Baroda was a real pleasure, and that the audience was “wonderful”. Performances in the smaller towns are always appreciated more as there are limited live concerts; one wishes that the zonal cultural centres, Sangeet Natak Akademi and IGNCA regional centres hold more such events. Audiences in cities like Delhi, even though concerts are non-ticketed, are blasé, knowing there is so much rich cultural fare on offer always.