We want to hit the basic consciousness of people, says Raghav Dang

According to Raghav, it was the positivity and the spirituality of the genre that inspired them to establish reggae in India. 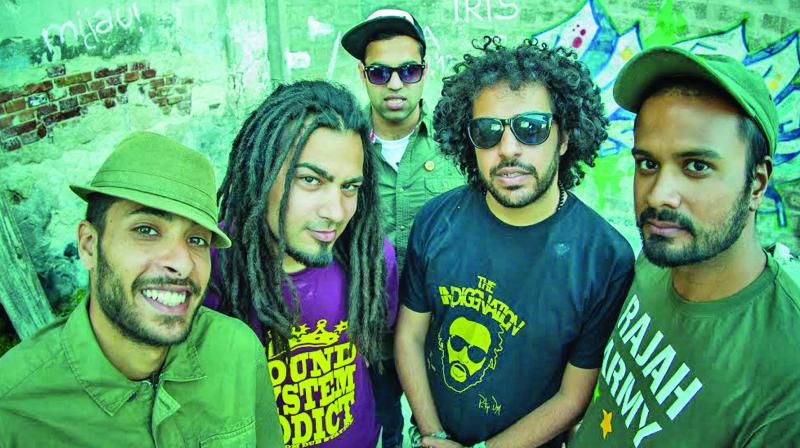 Music is that element, perhaps the only element, which has the capability to complement all your moods. Happy, lively, celebratory or gloomy… there are little surprises for everyone out there. And one genre of music, which is considered to be “spiritual”, “uplifting” and “socially conscious”, is reggae. The genre — according to Raghav Dang aka Diggy Dang from the band Reggae Rajahs — is widely popular in all parts of the world, including the UK and Japan.

The band, comprising Zorawar Shukla, Mohammed Abood, Rahul Gairola and Bader Esafi as its members, claims to be the pioneer of reggae music in India.

“We were all deeply inspired by reggae music and in India, we realised that no one was working on this genre. We came together in 2009 and casually begun with doing gigs in cafes in Delhi, Mumbai and Pune. Eventually, we did multiple tours across the world and got to know more about reggae culture,” says Raghav.

“Reggae music is uplifting and spiritual”
According to Raghav, it was the positivity and the spirituality of the genre that inspired them to establish reggae in India. “Reggae music is such that it has a message behind it. It is for people who like living life on their own terms, for people who are fighting with any kind of oppression in their lives and for those who like to be conscious about the environment they are living in. All these elements are  rarely found in any kind of contemporary music,” says Raghav.

The band’s philosophy
While they call themselves “the pioneers of reggae in India”, they also carry the responsibility of producing only authentic music on their shoulders. “We feel like the activists of the reggae movement and it’s a very big responsibility on us. We have to make sure that we create only organic music in an authentic way. We don’t compromise on the art and make sure that we create music that has the same ethos as the rest of the world,” says the 33-year-old.

“As a band, we want to hit the basic consciousness of people so that they are aware of themselves and the environment they are living in.”

Music based on diverse themes
In a country where people are so used to Bollywood music, creating a market for any kind of alternative music becomes difficult. So, the band chose interacting with the audience and making music on themes like the socio-political issues of the country, to build the genre’s deserved space in the industry. “When you interact with the crowd about the music, they connect better with it. We make music on themes like corruption, parental pressure, being free-spirited and being free from any kind of mental slavery. It took us a while till we found our niche audience which looks forward to something fresh and enjoys alternative music,” quips Raghav.

Following the same theme, the band released their video, “Dancing Moods” on YouTube last week, which is shot in Goa and has a happy-go-lucky reggae music.

The band’s inspiration
He continues, “Reggae culture in the rest of the world is what inspires us. We have experienced the genre with people who understand the ethos of reggae — which talks about equal rights and justice for all. We wanted to spread the same message here.”

“Along with an exclusive reggae festival, we also made a custom handmade sound system dedicated to reggae music,” he says.

“No infrastructure for live music”
Raghav laments that in India, there are very few platforms dedicated to live music alone. While there are established platforms for Bollywood music in most cities, there are lesser opportunities for international bands to perform here.

“Some of the biggest rock bands have never played in India. When other bands come to India, the local musicians do get inspired to do better,” says Raghav, adding that there is much more to learning than just watching YouTube.