Music has a power beyond anticipation: Steven Wilson

A silent revolutionary evolving just under the radar of the ever changing landscape of music. 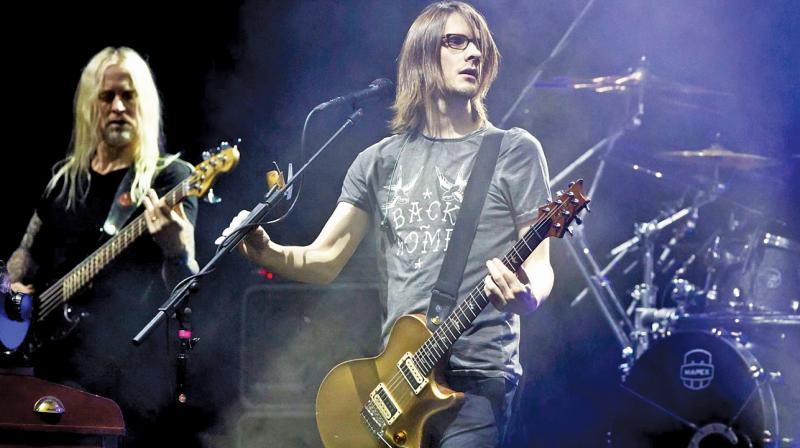 Original is perhaps the only all encompassing term that defines Steven Wilson.

Since making his way into the music industry as a teenager in the eighties, the British musician has gone about building a legacy for himself. Riding below the radar during the grunge movement and alternative rock of the 90s and early 2000s, Wilson emerged to fore, armed with his progressive and psychedelic rock influences and guided by sardonic and strong views of the world, through Porcupine Tree before finding more success as a solo artist.

A silent revolutionary evolving just under the radar of the ever changing landscape of music.

“My revolution has been a very quiet one in the sense that most artist that breakthrough attached to a movement or a musical theme. Like, the grunge movement,” revealed Wilson during an exclusive phone interview with this correspondent.

“My revolution has been without being attached to one trend and that is a very difficult thing to do,” he added.

“One of the things that is interesting is that if you look at the history of pop or rock music, most create their best work in the first 10 years of their career. I look at my career and I wrote a lot of not very good songs in my twenties, I started to be a good artist in my thirties and now, in the latter half of my forties, I’m really writing some of my best music of my life,” he said with a small laugh.

“I woke up and I had a big idea, To buy a new soul at the start of every year
I paid up and it cost me pretty dear, Here’s a hymn to those that disappear.”
— Buying New Soul

In an industry which is transient at best and built on the current culture and trends, Wilson, now, has quite an enviable position. Creative freedom, a sophisticated and hardcore fan base and the licence to pursue whatever themes and musical vehicle he desires without hindrance or influence from anyone but himself.

An environment created by design and held up by sacrifices and tough choices over the years. “It’s a very hard industry to be in without making any compromise. I’m at a very fortunate position where I don’t compromise at all. That isn’t to say that earlier in my career I didn’t. I spent many years making music for TV commercials just as a way to earn money so that I can continue to make music without compromising,” revealed the musician.

“If you are an artist, and not an entertainer, you really only consider what you want to do (and not current trend). It’s a very selfish pursuit and I think it should be. That’s a kind of sacrifice I’ve had to make in order to be pure in my music.”

“This has become a full time career, To die young would take only 21 years
Gun down a school or blow up a car, The media circus will make you a star.”
— Dark Matter

Perhaps one of the last bastions of a bygone era noticeable from his panache for melodic tones, soulful solos and a narrative approach towards lyrics, the 49-year-old’s songs tend towards the melancholic side, often tackling darker and sadder topics including war, loss, religious cults and general unrest mirrored around the world.

“It’s kind of hard to look around the world right now and not feel some sadness. The world is a very damaged place. I’m also fascinated by things I don’t understand. That’s been behind my drive to write songs,” said the Lazarus singer.

While these topics are certainly on the darker side, Wilson believes it’s the empathy among people that attracts people to his music. “I’ve always been attracted to the poetry of melancholy, if I can put it like that. And I think, in a way, my audience are also attracted to this in my music,” stressed the Porcupine Tree frontman.

“The best song I’ve written is The Raven That Refused to Sing and it’s a very, very sad song. What is amazing is, when we play the song live and see people in the audience crying. It’s almost like empathy for the whole human race at that moment. Music has a power beyond anticipation. That is very precious,” believes the songwriter.

With the rock culture now seemingly at an all time low since its rise as a world movement in the latter half of the 20th century, Wilson, himself a practitioner of the genre, believes it’s rock music’s inability to evolve that has led to it retracting from culture.

“I think one problem with rock music is that it has failed to reinvent itself in a way that perhaps electronic music or the DJ culture has done. Rock music for many decades was reinventing itself. It hasn’t really done that for a long time,” remarked Wilson.

“I would love to think that will change one day. Sometimes all it takes is one band.”

Having headlined the NH7 in Pune and the Backdoors music festival in Bangalore to end his Hand. Cannot. Erase tour, Wilson is keen to add some Indian influence to his music. “The tour itself was amazing. What an incredible experience for a musician like me to come from Europe to India where, I didn’t really know what to expect and to find so many people so passionate about the music, that was a real buzz for me and the band,” recalled the Blackfield singer.

“We are planning to come and do some video work for my next album in India. I really hope it happens because for me, India is a very inspiring, extraordinary, crazy and exhilarating place to come,” he signed off.