The five members of the band share a great camaraderie, but they wouldn't deny the presence of creative differences. 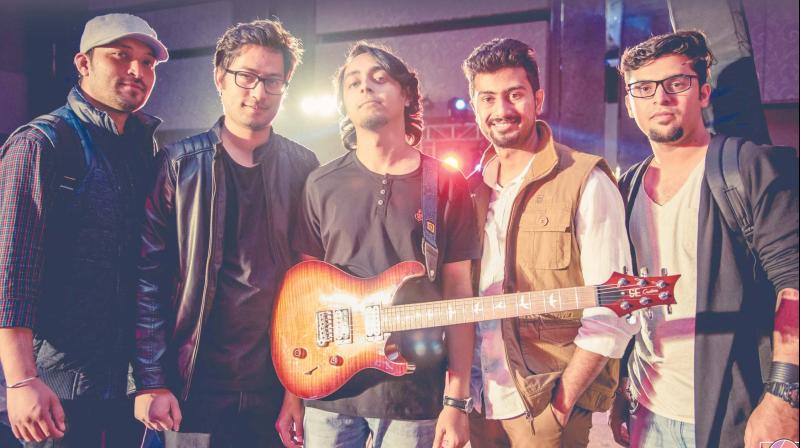 Bengaluru-based band Kalpanik Theory owes its origin to a very simple story–the need to break free from the shackles of a grunt job, and chase that ‘plan B’, which has been on the back-burner since really long. The boys garnered national attention when they opened for Mohit Chauhan at the Alive in India concert in the year 2016. The fledgling all-boys band released their debut single Khwabo ke rasto par parindey bhi udte hai on July 30. We get all the details...

“The music composition started with an introductory riff, which I initially made with my brother two years ago on a basic Yamaha keyboard ...while we were doing a random jam. It was probably the frustration of the IT life that gave birth to the tune,” quips Pruthvi Raj, drummer of the band.

But, it wasn’t long, when the band got in sync with the idea. “A while later,  the band members added their creative streak and song  into an unbelievable structure which I couldn’t even imagine it could sound like this. The whole arrangement and vibe of the song is to motivate and inspire everyone to follow their heart and start flying towards your dream,” he adds. The band came into being in the year 2015.

Three years and going strong, the band believes the evolution has been great  –   Opened for Mohit Chauhan Alive in India concert, for Bollywood singer Shaan recently at the Airport Habba show, bandstand performance for red FM alongwith  playing at a host of popular venues across the country. Speaking of the highlights, Vaibhav Darar, a bass guitarist says, “Shaan has an aura that’s so positive, energetic and rubs off on you. It’s always great to perform on the same stage where one of your idols is about to perform, such a great feeling.”

While they have their fingers crossed for this single, a full fledged band is in the offing too. “We are working on our first album.Khwabo ke raste is the first single of the album. We plan on releasing the next songs from the album by the end of this year,” he signs off.