Entertainment   Music  01 Jan 2018  Blues, and other colourful sounds of that genre
Entertainment, Music

Blues, and other colourful sounds of that genre

While there is no denying that the Blues were molded in North America during the 1800s. 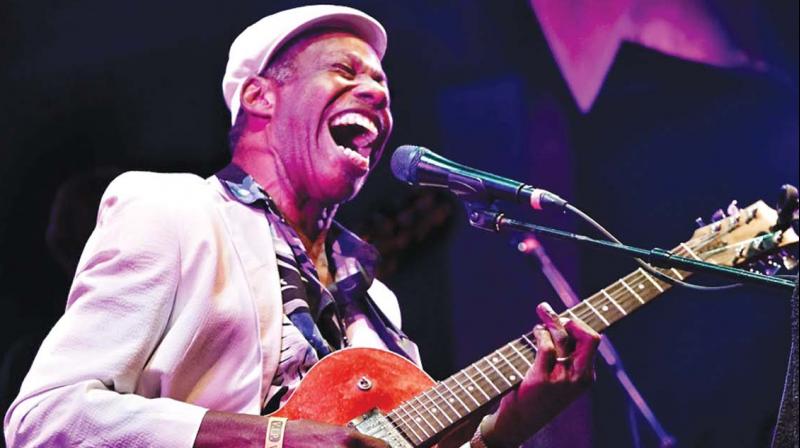 While the last week of 2017 was spent with Indian classical artistes protesting the GST being levied on tickets, and also the service tax payable by them, international music appears to have no such worries as the 2018 festive season opens with the annual Mahindra Blues Festival returning to Mumbai's Mehboob Studios on February 10 and 11. The precursor to this was, of course, the now erstwhile One Tree Festival, which was held at the MMRDA Grounds at Mumbai's Bandra Kurla Complex during the 2000s, with both festivals being promoted by Oranjuice Entertainment.

The Mahindra Blues Festival is being headlined by one of my initial influences on Blues, 84 year old band leader, keyboardist, and guitarist John Mayall, whose musical career spans over fifty years. In the '60s, Mayall became the founder of John Mayall & the Bluesbreakers, an influential Blues band that, through its various incarnations, included Eric Clapton and subsequent Cream alumnus Jack Bruce, eventual Fleetwood Mac founder Peter Green and members John McVie and Mick Fleetwood, future Rolling Stones guitarist Mick Taylor, impending Free bassist Andy Fraser, and guitarists like Walter Trout, who has performed at an earlier edition of the Festival, and Coco Montoya, who performs on the same stage with his one-time mentor this time around.

The tradition of Blues has been kept alive by the likes of John Mayall, his alumnus Eric Clapton, and Clapton's Crossroads Guitar Festival favourite John Mayer, to name a select few. One of my earlier discoveries of Blues arrived via Chuck Berry, who passed away in March 2017, a guitarist more known for his rockabilly tracks, but equally proficient with his selection of blues. By taking Muddy Waters as his guitar hero, when Berry signed with Chess Records in the mid-'50s, the label assumed that they were getting another Blues artiste. However, one of Berry's albums, dubbed 'Blues', indeed became something else altogether, creating the very template for what eventually was dubbed as "rock 'n' roll". But before that groundbreaking shift in style, Berry turned out straight forward Blues for Chess, several of them included on this album, including "Wee Wee Hours", and renditions of Don Raye's "Down The Road A Piece", Guitar Slim's "Things I Used To Do", and W.C. Handy's "St. Louis Blues".

Nevertheless, it was through John Mayall that I also discovered his very own artiste influences, which included musicians such as Freddie King, Mose Allison [also an inspiration on Jethro Tull's Ian Anderson, as he informed me], Little Walter, and Elmore James, to name some of them and, of course, the legendary Robert Johnson. In fact, Mayall's live repertoire also includes renditions of Chicago blues guitarist JB Lenior's "Voodoo Music" and fellow Chicago blues harpist Sonny Boy Williamson's "Help Me", both tracks that he should be performing live at the Festival, along with staples such as "Nature's Disappearing", "California", and an encore in "Room To Move". Other performers during the Festival include Walter 'Wolfman' Washington, an American singer and guitarist, based in New Orleans, Louisiana, whose roots are certainly in Blues music, although he blends funk and R&B to create his own unique sound, and singer Layla Zoe who, after her post-millennial breakout on the local circuit in Canada, has created a Blues platform for herself.

While there is no denying that the Blues were molded in North America during the 1800s, as I have mentioned in this column previously, I remain convinced that its roots still lie within Africa. To support my case, consider an African instrument that goes by the name of akonting, which is the very obvious precursor of the banjo, the comparatively modern-day instrument effectively utilised by guitarist Taj Mahal during his performance at the Festival while playing the Blues; and the roots of the modern-day plectrum, which is utilised to press the strings of the guitar where, originally, a knife was used, a technique that is still common in Western and Central Africa.

Nevertheless, returning to mother India, it is indeed a pleasure to note [pun intended] that there are sufficient passionate event organisers who are doing their level best to ensure that the niche of Blues moves beyond the realms of being a mere colour by turning into a musical genre that is heading mainstream!