It is a kind of film where the otherwise good ensemble is also kind of bored performing the same old buffoonery. 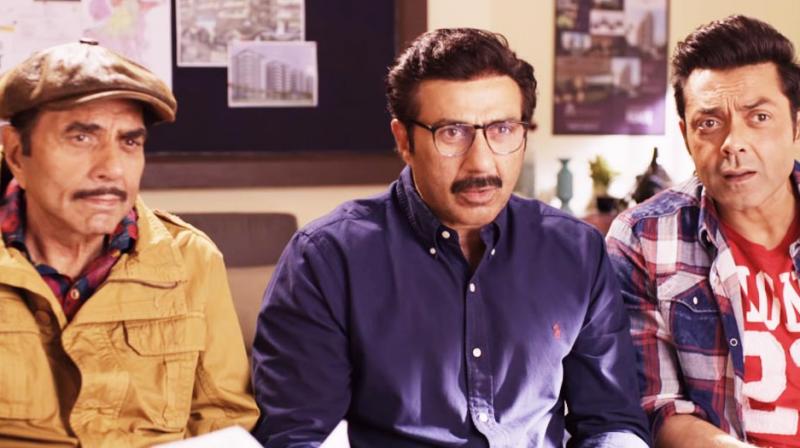 The Deols are back after their successful stint in 2011 with the first 'Yamla Pagla Deewana' which fared well due to freshness of crazy banter between the three. However, the latest addition to this comedy franchise doesn't come close to what they claimed to be - Entertainment.

Puran (Sunny Deol) is a small-time Ayurvedic 'vaid' who cures his patients with a wonder drug named as Vajrakawach, that has been passed on through the generations. A pharmaceutical magnate Marfatia (Mohan Kapoor) offers a big sum of money to Puran to acquire this drug, but he refuses. Cheeku (Kriti Kharbanda) manipulates Puran's gullible brother Kaala (Bobby Deol) in order to steal the formula for Marfatia. They promptly patent the medicine and send Puran a legal notice. Puran and Kaala’s snappy tenant Parmar (Dharmendra), who happens to be a lawyer, represents Puran and Kaala in court. The further events ensue a crazy journey of the three.

The film stretches itself too thin by stuffing all kinds of 'masalas' in the narrative. Despite that the jokes fall flat and the acting, though consistently okay, stop being funny. Director Navaniat Singh tries to use every trick seen before in other wacky comedies but he fails to create any magic here. The screenplay is lacklustre and the narrative is bombarded with too many unnecessary songs. At over two hours long, the film bogs down during some repetitive, too-similar gags, and especially during the sentimental moments. Toward the end some of those scenes even feel tacked-on, and slow the pace way down. The viewer gets pulled out of the film's momentum so quickly that you realise that the otherwise good ensemble is also kind of bored performing the generic buffoonery.

Bobby Deol surprises as being the funniest out of the entire lot. He very well put his comic timing on display. Sunny Deol seems to be remained in his old avatar and fails to exhilarate even with his usual antics. Dharmendra looks to be enjoying this rocky ride and his enthusiasm is kind of adorable to watch. Kriti comes off as a breath of fresh air in her cute and confident appearance but there's nothing much for her to do. The rest of the supporting cast is average.

At the end, we just hope this is the last one for Deols.