Baaghi 2’s plot is simple. It’s also a copy. And yet three writers were required to collaborate on its screenplay. 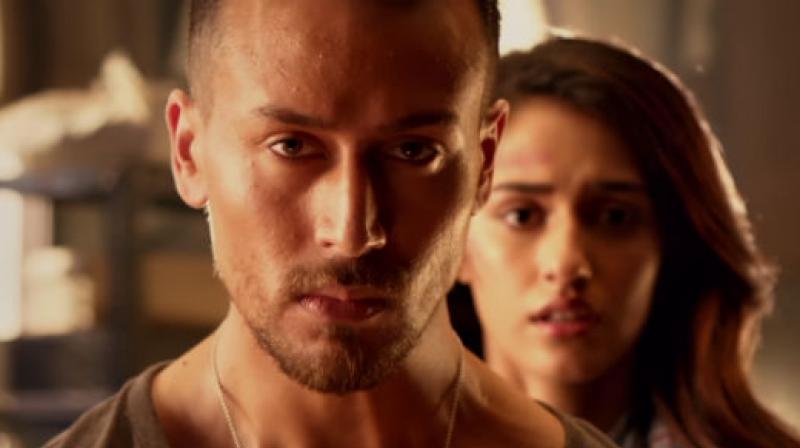 Tiger Shroff and Disha Patani in a still from 'Baaghi 2'.
Rating:

I’m not aware if a formal circular was sent out, but it has become mandatory for almost all movies these days to flash their nationalistic credentials upon arrival. Baaghi 2 does it in a way that is loathsome. A copy of the 2016 Telugu film Kshanam (Moment), director Ahmed Khan’s Baaghi 2 is built around a young box-office heartthrob who has dolle-sholle, mean quads and hamstrings, and zero acting talent.  Thus it begins, with such horrifying thrashing of a rather delicate damsel that it made me recoil in disgust, but is designed to make every filmy desh bhakt’s blood boil.  But Neha (Disha Patani), who is hit on the head, beaten ruthlessly and had her face kicked, is up and about two months later. We catch her in a gurdwara with just two red bruises and, for a bit, her arm dangling in a cast. Perhaps, we think, she has come to thank Babaji for her miraculous recovery that only certain film directors have the gumption to pull off. But that’s not the case. She wants something. The sweet Granthiji reassures her and her mind and the film’s crew rush off from Goa to snow-clad Kashmir where a small, lonesome shack is regurgitating men in phirans. Out they tumble, from the windows and the door.

Ranveer Pratap Singh aka Ronnie (Tiger Shroff) is a fauji who doesn’t like being slighted, and definitely not by Kashmiris who think stones are more powerful than bullets.  This is our ilaaka, one Kashmiri says tauntingly, making Ronnie plan his exit in Major Leetul Gogoi style.  As Ronnie rides out in his jeep with a human shield attached to it, the proud poster boy of hyper-nationalism, I felt the urge to grab the popcorn bucket of the child constantly muttering behind me and puke in it. But worse was to follow.  Upon being questioned rather mildly about the human rights violation, Ronnie, unfazed, says, “Sir, Tiranga nahin jalana chahiye tha.” That’s when I thought of our real life, in which Gogoi received a commendation from Indian Army Chief General Bipin Rawat. Bollywood may be craven, but it’s not lying. It is showing us what we have become. Or, scarily, who we always were, incognito. Back in his tent, Ronnie listens to a message on his phone. His ex, Neha, has left him an SOS. But just as he’s getting ready to fill out his leave application, his fauji pal reminds him that it’s taken him four years to get over her. LOLz.

It’s clear that Ronnie has not gotten over Neha because immediately we go where his mind is — back to the days when he and Neha were a lovey-dovey, happy item in their rather posh college.  With all this on his mind, Ronnie heads towards Neha while striking a pose — his feet more than hip-distance apart — that’s meant to be a warning to all bad guys dwelling wherever. My daughter Shreya, pet name Ria, has been kidnapped, Neha says. And no one is helping me find her. So you must.  Ronnie frowns, asks a few questions and then heads to Usman Langda’s garage to rent a car. Usman (Deepak Dobriyal) feels instant affinity for Ronnie and utters deep, discerning, dull lines. As Ronnie starts his investigation, neither the school principal, nor the guard, or the neighbours have a clue — not just about the kidnapping Neha talks of, but her daughter Shreya as well. Soon, the cast of characters expands. There’s the top cop, DIG Shergill (Manoj Bajpayee), an old pal of Ronnie’s boss, who keeps quoting his Bade Bhaiyya to calm down the angry fauji.

Then there is ACP Loha Singh Durg (Randeep Hooda), LSD in short.  After making udta Punjab land, I am here to clean up Goa, he says with a chuckle. But his attitude and attire suggest that he’s just sauntered in from a smokey joint on Anjuna beach.  We also meet Neha’s cocaine snorting devar, Sunny (Prateik Babbar).  With flashbacks to the past, we are informed about the present where Ronnie, disregarding his Colonel’s order to report for duty at dawn (thus, baaghi, rebel, I’m guessing), has stolen the I-card of a cop to probe Ria’s disappearance.  One set of clues suggest that Neha may well be a raving loony who thinks she has a daughter, but then Neha does something that makes Ronnie pursue the truth to the den of the drug kingpin in true Rambo style. More than the crushing of skulls, cracking of bones and annihilation of people with bad karma, this sequence in the forest shows the middle-finger to all that is logical, scientific and humanly possible. Of the lot, running straight at and jumping upon an automatic firearm that sits in a hovering helicopter firing bullets straight at him has got to be the most Rajini Sir thing that Ronnie does here.

Baaghi 2’s plot is simple. It’s also a copy. And yet three writers were required to collaborate on its screenplay.  Despite that they could not come up with half-decent situations to wedge in two item numbers — one so dull that it’s best forgotten, and the other so offensive that it must be ridiculed repeatedly.  The best dancers in the world can’t compete with Madhuri Dixit. And Jacqueline Fernandez, with her gym-toned thighs and pilate abs, is not even in the outer ring of decent dancers.  Choreographer Ganesh Acharya and Ms Fernandez turn a lovely, important cinema memory into an ugly gyration that is so boring that for a moment I actually considered standing on my H9 seat to entertain the hall. Jacqueline is not dancing here. She is combining her gym workout with some hectic movements of the pelvis while pouting needlessly. There’s no fluidity, no rhythm here — just a disturbing display of what passes off as Bollywood dancing these days. As they say, nakal karne ke liye bhi akal chahiye.

If acting were a martial art, then Tiger Shroff is truly an excellent actor. When he kicks, bad guys’ molars pop out like bloody popcorns. He’s cast and set in that “mera moonh nahin, mere muscles baatein karte hain” mould. That’s why the dialogues written for him require special skills — they are stiff and staccato beyond belief and are delivered either with teeth clenched or a toothy grin. There’s no in between because in routine, normal situations Tiger Shroff looks decidedly depressed, as if upset that the director is wasting his precious gym time by making him talk.   But since, between the hero and the heroine here, Shroff is prettier, the film, whenever it can, caresses his ribbed body for us.  In one scene, in fact, the camera goes bonkers. It moves up and down, almost licking Shroff’s muscled body which is standing tense in very tight, very small chaddies. While Tiger Shroff shows us how dull it is to act, Randeep Hooda and Manoj Bajpayee show us what fun it is to actually be able to act.

Hooda isn’t so much a part of this film as he is the star of his own little sub-film within Baaghi 2. He glides in, like a dazzling flotilla, complete with beads, beard and braid, bringing some masti to this one-track tedious affair. He even gets a companion, Bosco, whom we feel even though we don’t meet him. There’s a brief scene in Baaghi 2 when Manoj Bajpayee’s DIG Shergill and Deepak Dobriyal’s Usman Langda are sitting quietly, face to face. It’s a moment that spoke to the audience spontaneously without a word being uttered, and many burst out laughing.  The way these two ace actors — trapped in a film so idiotic and bizarre — look at each other, as if sharing a private joke about the kindergarten level of acting they are having to do, is the most honest moment in the film that the camera picked up.  PS: I would like to be in on what I presume is a very interesting story behind Prateik Babbar’s inspired casting here. But I don’t think it’ll be told anytime soon. If and when I get to know, I shall share.