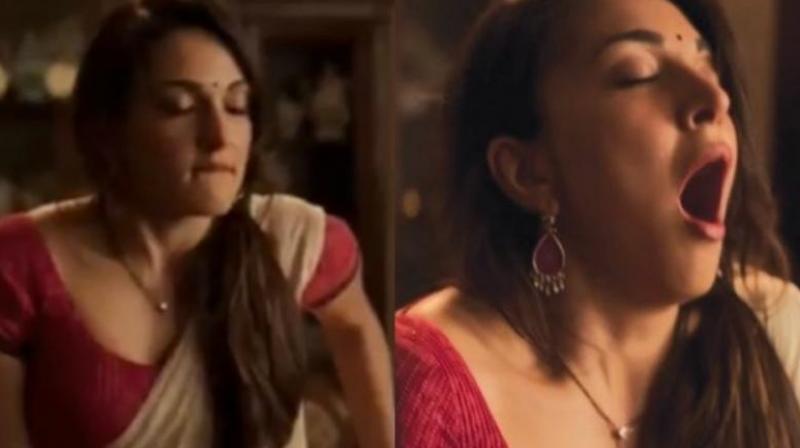 Kiara Advani in a stills from 'Lust Stories.'
Rating:

Kalindi (Radhika Apte) is hanging out of the window of a moving taxi and feeling the breeze fondle her as Lata and Mukesh’s Dum bhar jo udhar munh phere plays inside where Tejas (Akash Thosar) sits both excited and amused.

Lust Stories, on Netflix, which brings together once again the four directors who created the 2013 Bollywood anthology, Bombay Talkies, opens with Anurag Kashyap’s film about a college professor who is seemingly liberated — sexually and emotionally — and is having an affair with a student who is clearly smitten.

The narrative is split between Kalindi talking loftily about love, sex, relationships, self-expression, and exploring what her husband Mihir, older and living away from her, expects of her and their relationship.

We don’t know who Kalindi is talking to, or why. But here her holding forth on love, possession, giving the usual arguments against monogamy — love is greater than physical fidelity, look at Amrita Pritam and Imroz, Draupadi and her five husbands, how can we expect one human being to be everything?

She has other affairs, flings, in college with Neeraj sir who speaks of monogamous penguins and fornication. We also see her stalking Tejas and his girlfriend.

Through these two narratives, Kashyap explores the pretentious, hypocritical, two-faced liberals who speak of free-spirited love, worry if the other will fall in love with them, but are emotionally too barren and twisted to let go themselves.

We don’t meet Mihir, but we watch Kalindi wilt under his rules of love and life.

Her erotic-neurotic act about wanting to belong, her uncontainable insecurity even as she speaks of free love creates tense, uncomfortable moments in Kashyap’s otherwise middling film.

As I sat there thinking that Kashyap’s film, which shows us many things — the obsessive women, but also the disconnect between who we think we can be, the bullshit we mouth, and who we really are, the lusty sound of making out came on with man on top and white letters at the bottom of the screen announced, Zoya Akhtar.

Instantly I burst into this loud, involuntary cackle that became a full-throated laugh which was sounding a little mad even to me.

I could not get over the middle finger Bollywood’s brat pack was suddenly showing. Imagine what our directors are capable of and can get up to if you set them free of sanskari diktats, heavy moral breathing, the uncles and aunties at the censor board and the pressures of commerce.

The man is on top and then the woman. It’s physical, sweaty, brief.

Soon after we watch Sudha (Bhumi Pednekar) and Ajit (Neil Bhoopalam) get dressed through sparse, partial shots that land gently, like pieces of them and who they are. Very little is spoken, but these snapshots in a sequence do more than just tell us the story. They create the characters with each shot, like a brush stroke, joining with the next and the next to form a living, breathing human with its inner cosmos now talking to us through the nape of the neck, where the slippers are kept, how the dupatta is tied around the waist.

Soon Ajit’s parents arrive and bring along a family and their marriageable daughter.

Again with fascinating vignettes of domesticity that Sudha creates and nurtures, but doesn’t belong to, we begin to see her place, her desires.

Unlike her rather loopy segment in Bombay Talkies, this one, shot and edited so beautifully is, perhaps, the best one of the lot.

Bhumi Pednekar is a powerhouse of talent. If anyone’s looking to cast the lead in a silent movie, she’s the ideal candidate.

Her body and eyes express a complexity of emotions rarely seen on the Indian screen.

Dibakar Banerjee’s film is next. He first creates the idyll of comfortable, intimate coupledom around Sudhir (Jaideep Ahlawat) and Reena (Manisha Koirala) on a holiday, bonding, making out, chatting, relaxing, and then shatters it with a phone call from Salman (Sanjay Kapoor).

Drunk, Salman is calling to gripe about his wife. He’s frustrated that she switches off the location service on her phone, wonders if she’s having an affair.

Talking to Sudhir, his best friend, he says he’s emailed details of all his properties, investments and bank accounts.

Thirteen years of married life, and she says only for 11 months she was happy, he says.

Salman, the most eagerly awaited character, takes his time to arrive, and when he does, Dibakar plots his entry to tell us several things about him.

Salman enters exactly how men low on self-esteem but high on ego would enter.

And soon, the bored wife and the husband who loves her and is invested in his family, start arguing.

The exchange is stunning and sharp and conveys how deep the rot is. They don’t listen to each other, preferring to latch on to just one word and continue fighting.

“You are collecting trophies”

Salman’s tangential talk in the middle of their bickering, about business and worldly affairs, reveal him to be a selfish man invested more in the tangibles of life.

Meanwhile, Sudhir the heart surgeon, who himself needs validation for being worthy, isn’t just carrying on with a college attraction, but like to watch his own interviews on YouTube.

Among the people locked in this three-way relationship, as hypocrisy and dishonesty gets revealed, the one who has been wronged, it seems, may lose both, his wife and best friend.

But he refuses to be lost to them.

In real terms, in ways that eventually matter, the one who seemed lost, pathetic, shows character in a way that is truly devastating.

The casting in Dibakar’s film is delightful, but it’s Sanjay Kapoor who brings this gloomy marital mess alive with his obnoxious-yet-simple guy routine.

If the tone of Lust Stories till now was “real”, with real people in real situations grappling with real life, it suddenly lifts off the ground, grows shiny wings and flies into the soft, white Bollywood cloud.

Here characters are stock, drawn wholly and solely from previous films and some bad romance novels.

In a tone and dialogue that’s so fake and fabulously filmy, Rekhaji says, “Tope se barood nikalna har sipahi ke bas ki baat nahin hai” as she send off Megha to the principal.

Double entendres galore, and extend to even silly, childish ones like ice cream when Paras (Vicky Kaushal) comes to meet Meghaji.

To make him uncool, the bad English assigned to him is the sort babalog often giggle about. “Hows you?” he asks Megha.

While other directors draw stories and inspiration for characters from the lives that have lived or observed, KJo prefers la la land.

It’s as if he’s grown up not in the real world but lived wide-eyed and cheeks-stuffed-with-popcorn in a plush theatre where Bollywood movies played non-stop.

The reality he sees, the scenes he constructs, his characters and the lines they speak are all drawn from other films.

It’s with inspiration from other films that he creates his own film to tell us a fairy tale. And his characters speak the language of dreams, of heroes and heroines, of divas and dudes — not common people.

And sometimes, like here, he pulls it off so well.

In his tale here, where the fairy craves orgasms but the man is always, well, premature, we get great music, a shaadi, family dinner, and “saas ki chain-chain, palang ki choon-choon”.

It’s an episode that shifts something while being childishly naughty, entertaining and so much fun.

And here having serviced one woman, it comes in handy for another in a way that’s silly, faltu but will stay with you forever.

It’s a life-affirming embrace of women’s desires, and I can only say, aah, ooh, wah.