The film features Taapsee Pannu, Manoj Bajpayee, Prithviraj in the lead roles and Akshay Kumar in an extended cameo. 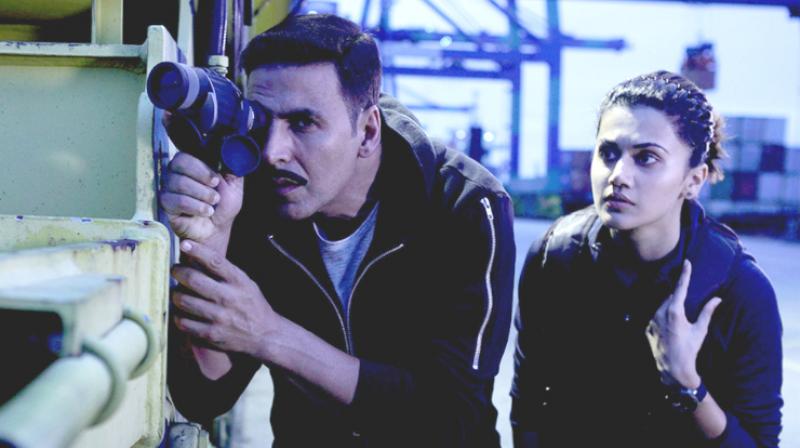 Director Shivam Nair, who last tried the thriller genre in his 2015 disastrous outing, Bhaag Johnny, has explored another not so edgy thriller film Naam Shabana. Whoever goes in expecting a film to be on lines of the Taapsee Pannu starrer Pink or Baby, will be let down. Producer-writer Neeraj Pandey pens down a film which highlights the issue of self-defence and women safety.

Shabana (Taapsee Pannu) lives with her mother Farida (Natasha Rastogi) in the heart of Mumbai city. Her college friend Jai (Tahir Shabbir) secretly admires Shabana but never really expresses it. Shabana’s life changes when a bunch of local vagabonds kill Jai in the wee hours. An undercover agent Manoj Bajpayee contacts Shabana to help her in seeking revenge from the murderers of Jai. Shabana kills the ruler Karan of the brat gang. In return, Manoj Bajpayee asks Shabana to train for their most important mission.

The secret mission is to expose and kill Tony (Prithviraj), who deals with human trafficking and money laundering across the globe. Akshay Kumar and Anupam Kher help Shabana in planting her around Tony. Will Shabana repay Manoj Bajpayee by killing Tony?

Known for making content driven films like A Wednesday and Baby, Naam Shabana is surely a disappointment from producer-writer Neeraj Pandey. However, the flak also goes to director Shivam Nair for a poor execution. First half is flat but raises high hopes in the second half but by then it is too late to even like it.

Neeraj Pandey must have thought that Taapsee Pannu’s current status in the industry might work for the film but fails to impress in every possible way. In the recent past, we saw films like Akira and Pink, which deal with the plot better than Naam Shabana. However, one must say, films like Kahaani and Queen have opened doors for female centric films in Bollywood. However, Naam Shabana doesn’t stand out in its pace and thrilling element.

Taapsee Pannu is the knight in shining armour of the film. It is so good to see her breaking bones and kicking butts so effortlessly. Her power packed performance in the film is an answer to those who considered her a lesser talent early on. (Pink is an exception). She debuted with Chashme Baddoor in 2013 and post that she changed her image entirely with films like Baby and Pink.

Manoj Bajpayee stands out in his strict undercover agent act. Prithiviraj is good in his negative role but he is unintentionally funny in a few scenes. Akshay Kumar is a comic relief in his cameo. Natasha Rastogi has a small yet striking role of a caring and emotional mother. The rest of the cast, which includes Anupam Kher, Tahir Shabbir, Manav Vij, Zakir Hussain do a fair job. Elli Avram and Shibani Dandekar have nothing to do in the film other than seducing the men dancing around them in a night club. Madhurima Tuli is literally in one scene (no harm since it’s a Taapsee Pannu film).

Although the music composed by Rochak Kohli and Meet Bros is average, Zubi Zubi and Besharam are ear scorching. For me, a no song film is always a preference and Naam Shabana had no scope for any music because of its plot but this wasn’t the case with it. The film could have been better paced, all thanks to the under-cooked narrative. Naam Shabana is a throw away effort from director Shivam Nair and producer Neeraj Pandey, where the only saving grace is Taapsee’s act.