Simmba’s story is pivoted on the rape of a moonh-boli-behen, but not as a crime to be dealt with, by the cops and the courts. 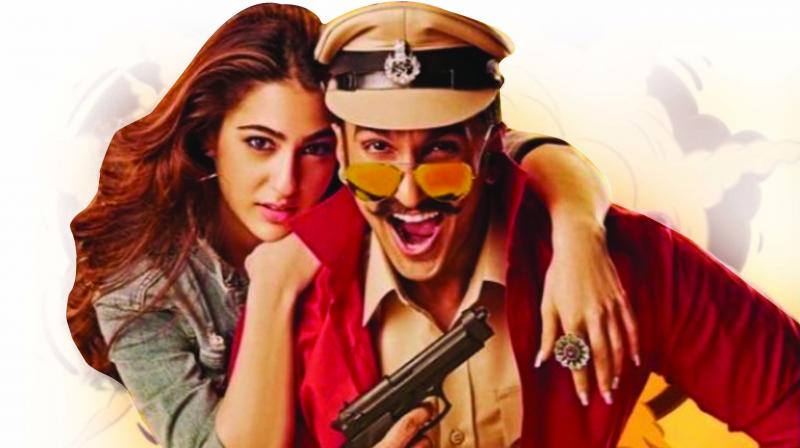 Simmba, a movie based on the 2015 Telugu hit, Temper (starring Jr NTR, i.e. N.T. Rama Rao’s grandson), is a crass, cynical, coldly-manipulative, morally-repugnant enterprise that uses a rape to carve out a hero by giving him raison d’etre.
Rating:

Whenever you think that Bollywood — as in those money-grubbing flag-bearers of commercial Hindi cinema who will stop at nothing to extract a tear, a clap, a whistle and, of course, your hard-earned cash — could not stoop any lower, it breaks fresh new ground in moral turpitude and sinks a bit lower still.

Director Rohit Shetty has always pandered to pathetic, almost cliched, male complexes rather proudly. Crouching inside many big boys are little boys with big penis issues, and that’s been his target audience. His mission has been to get those wimps to fantasise about posturing as alpha males. That he inadvertently, but in a darling assertion of the sub-conscious, also creates very campy, homoerotic scenarios where big-big boys only like to be around other big-big boys — as besties, adversaries, chelle-chakare  — would have been mildly interesting if the gay love, often in full bloom, was at least self-aware, if not acknowledged.

But that’s too much to ask of a director who only likes to talk of the commercial underpinnings of his movies, and on the telly screams about physical courage while the camera caresses his bulging biceps. It can’t get creatively and intellectually more effete than that, and yet it has.

Simmba, a movie based on the 2015 Telugu hit, Temper (starring Jr NTR, i.e. N.T. Rama Rao’s grandson), is a crass, cynical, coldly-manipulative, morally-repugnant enterprise that uses a rape to carve out a hero by giving him raison d’etre.

The movie doesn’t just use a rape. It uses the December 2012 Nirbhaya rape case with all its specific, emotive details.

Simmba’s story is pivoted on the rape of a moonh-boli-behen, but not as a crime to be dealt with, by the cops and the courts. The rape is simply grist for a cowardly, corrupt man to kick-start and rouse his conscience. It exists as a trauma for the hero to go crunch some bad skulls and bones and turn into the saviour of ladies log ki izzat and abroo.

The film screams “rape” so often, that you’d think that’s all that happened. The girl is also killed.

But that, in Rohit Shetty and Simmba's worldview, doesn't really matter. It’s just a silly little fact that complicates things and is best left out. Rape in this world is much, much worse than getting killed. And that, apart from other things, is what made me run to have a bath after watching Simmba.

It made me feel very dirty.

Simmba, written by the all-male team of Vakkantham Vamsi (Temper), Yunus Sajawal, Sajid Samji and Fardah Samji, opens with a young orphan learning the ways of the world when money changes hands in a police thana and the beating stops.

It’s simple: Vardi means power. And so he sets out to earn a living in the day by selling cinema tickets in black and attending night school run by sweet Gayatri Didi. All along, Ajay Devgn’s voiceover provides us with some unnecessary gyaan.

Cut to a few years later when the film welcomes full-grown Sangram Bhalerao aka Simmba (Ranveer Singh), in a very colourful and pretty setting as he chases after some senior citizen goons. The movie wears a festive look as Simmba arrives, in slow-mo, to run around long strips of cloth in rainbow colours while women slap wet yardage on hard stone. The film watches lovingly as crystal droplets bounce around and on Simmba, and then throws in some rousing chanting as well.

What got my attention in this sequence was how much Simmba was grinning. Nice, white teeth and all, but a bit too familiar, I thought.
We’ve only just met, dude.

In the first five minutes or so of the film we get two songs, yet there’s also non-stop talking. Simmba is given to breathless chatter, with some marginally funny one-liners. But it's too much, too soon.

Simmba likes kicking bad butt because these bruised butts want out, and he’s happy to oblige, for a price. The obliging, pliable cop is soon transferred to the “gold mine” thana, Miramar, with instructions — do not mess with Durva Ranade (Sonu Sood).

In this thana, which has some vague connect to Singham, the happily corrupt cop finds many like-minded, ghoos-khor cops, and just one rigid, lone voice of honesty. Head constable Nityanand Mohile (Ashutosh Rana) won’t salute his corrupt senior.

But Simmba is not too bothered because across the road is Good Food Catering run by pretty Shagun (Sara Ali Khan). And then there’s Akruti Dave, a medical student who teaches orphans in her spare time on the steps of a church.
Awwww. Like my Gayatri Didi, he goes.
That Akruti has come to complain about drugs in the school bags of her students is lost on him.

Simmba has a decent cast. Sara Ali Khan is confident, efficient and almost there. All she needs is a little more experience and she will come into her own.

Sonu Sood is good, as usual.

Ranveer Singh may well be a better actor than most burlies who have graced Rohit Shetty’s sau-crore-toh-pakka enterprises before, but he doesn’t have what Ajay Devgn has.

Though in melodramatic situations Ranveer is not bad, he is not able to project power and anger the way action heroes need to.

For one, he’s very verbose, and his high-energy is neither exciting nor impactful.

The film does its damnedest to create an action hero of him with genuflecting camera angles and serving him in slow-mo, but as the film’s tedious, idiotic crawl to the climax gets unbearably dull, it has to summon Singham to get the job done.

Admittedly, I have issues of my own and that’s why I enjoy taut revenge/rape-revenge thrillers.

By definition, it’s an exploitative genre, often with pornographic undertones.

I clearly see that they are a celebration of patriarchy, that they reiterate a world order as penis-swinging men see it — a world where all male izzat is linked to the bodies of their women. And if that is violated, it means the other man has announced that he has a bigger one. The women are incidental in this clash of penises.

Most of them have a three act plot-line and, yet, the good ones, like The Virgin Spring, Charles Bronson’s Death Wish, Kill Bill, Oldboy, Django (original), Irreversible, Insaf Ka Tarazu, Eye For an Eye… and others, create unbearable dramatic tension that must, inevitably, lead to violence that’s a gory art form for the big catharsis.

They are base, manipulative fantasies that are uniquely gratifying for those harbouring delusions of grandeur.

Over the years, we have learnt to suffer certain things in Rohit Shetty films.

He will repeatedly assert a very masculine, militant, chauvinistic Maratha identity. So, endless haughty dialogue in Marathi with no sub-titles, and the war bugle.

His films also reinforce a worldview that appeals to old prejudices and mindsets, never once challenging them.

There are also big, burly dudes crashing their big, colourful cars in plots that are formulaic to an unbelievably imbecile level. But here it’s gotten worse.

Simmba's screenplay is so badly written and so terribly scant that often scenes are stretched like chewing gum, ready to tear.

At one point the movie gets so dull and boring that the only way Shetty can throw in some excitement is by making a speeding van crash through a massive glass window.

That apart, there’s moral confusion. At first, when Simmba is corrupt, the film celebrates him as a fun guy and paints honesty as an annoying, depressing, pointless burden. Later, when he turns a page, honesty is embraced with tears.

Though Simmba is about a rape, there is hardly any connect between the so-called bhai-behen. Simmba and Akruti barely exchange a few words, and yet, for him, her rape suddenly becomes so significant and powerful.

But all these are minor problems compared to how Simmba tackles the issue of rape.

For a film that wants to sit on high moral ground preaching about how India treats its women, Simmba shamelessly exploits every nugget from the Nirbhaya case.

It’s creepy how Rohit Shetty and his writers have trawled through the details of that real-life incident to pick some bits to make their own enterprise commercially viable.

Disturbing details of her medical condition are used as gore to amp up Simmba’s anger. Her hanging innards are treated as the noose he must use to kill the rapists.

I thought at one point I saw irony stand up in the aisle of the theatre and stare google-eyed at the screen.

The film screams rape so many times, over and over, but hardly ever talks about Akruti's death, because, well, a woman’s honour is supreme. Not her life.

And even there, instead of treating rape as a crime that a cop must meticulously investigate and present to the court, it looks at it only from a male, patriarchal perceptive and makes it all about honour-dishonour.

The things that get said around it — to settle scores -- are insufferably insensitivity. At one point there's talk of mardangi in the context of rape, and then the cop asks women what do they want, as badla.

Since the film has already made up its mind that rape is worse than death, badla means the rapists have to die.

Sometimes, there just isn’t enough vomit in the world. Not for Rohit Shetty's Simmba.