Varun Dhawan is a limited actor and there’s a very small, tight circle within which he is good. 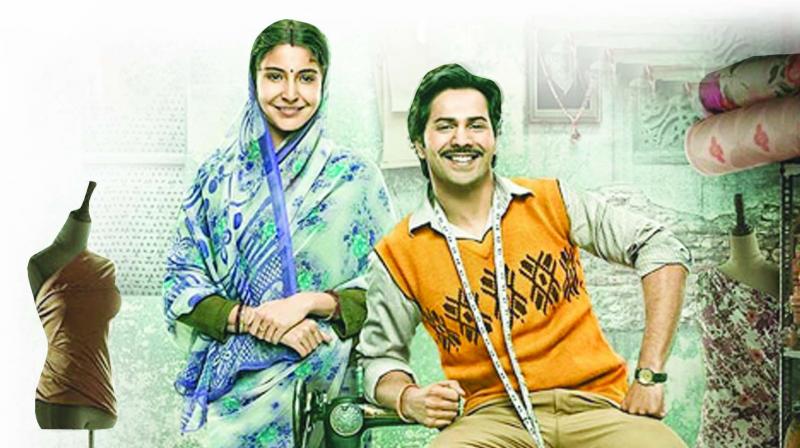 Let’s begin with the example of clothes since writer-director Sharat Katariya’s sweetly named film, Sui Dhaga, is all about clothes weaving dreams.

Let’s say someone truly talented sets out to create a dhoti-kurta ensemble by, first, weaving a cloth that’s designed especially for it. Its texture and weave is distinct and unique, and has a stand-out luminance when turned into a dhoti-kurta. The cut is new, stellar, and while it looks simple, it’s stunning in its minimal elegance.

What do you think they’ll do?

One will put sequins all over it, the other will bathe it in zardozi, and the third will add trimmings of velvet in a contrasting colour that peep out from all its shores. They’ll also cut here, nip that, add a collar or pockets that scream for attention. One will also slap on its chest a patch with an ugly coat of arms woven on it.

Then, before sending it off to march down the ramp as one of their many fusty, uninspired creations, they’ll all drape a stole on it — its personality and integrity dead under the cliched taam-jham, reducing an original creation to an undergarment of their mediocrity.

Sui Dhaga, having been rung through a big production house of Bollywood, in this case Yash Raj Productions, suffers the same fate. I imagine that they took a look at its rather lovely, simple, small, pulsing story and, finding it too khadi for their taste and expense, added to it the usual, exaggerated melodramatic highs and lows to illicit big tears and cheers. The end result that it feels like yet another clone from their factory dedicated to not taking any chances at the box-office.

At the heart of Sui Dhaga, written and directed by Sharat Katariya, sits an adorable story about an arranged marriage couple who, even in their small house, have lost touch with each other. They, in fact, never really met each other, not since he came to her house to approve his prospective bride.

Now, though their paths cross daily, it’s only for communicating chores completed or the ones that need to be completed.

Mamta (Anushka Sharma) is busy all day filling buckets of water, serving meals, tea, covering her head with her pallu, while Mauji (Varun Dhawan), who sleeps alone on the terrace at night, gets up to rush off to work at an Usha sewing machine showroom.

They live with Mauji’s Bauji (Raghubir Yadav) and mother (Yasmin Dass). Bauji, now retired, sits in the small veranda disapproving of Mauji, seeing in him nothing to encourage or appreciate, while his mother is too busy worrying about the erratic water pump.

There’s a sweet-sad warmth to the daily beats of domesticity where the basic, crucial needs of two men are taken care of by two women from their dingy kitchen. All other desires are annoyingly superfluous in this low-income group house.

Soon, a rather farfetched scene is inserted to make Mamta weep tears of embarrassment as she watches the depths to which her husband will stoop to make a living, and this give the film its first twist, setting off Mamta-Mauji on their journey of self-discovery, saath-saath mein. Then, immediately, to make things very tough and scary for all involved and us, a parent has to take a fall.

This dip leads to a joyful rise thanks to the wits and wagers of Mamta and Mauji.

This uplifting walk of coupledom rests on the magic of Usha sewing machine and Mauji’s skills with it.

Mamta and Mauji are now a team, one encouraging the other, and the other doing his damnedest not to disappoint.

But matlabi duniya and the unscrupulous brother-in-law of Mauji’s real chhota bhai ensure that their efforts and creations are owned by and benefit another.

Here too extreme hardships are inserted thanks to people so stupendously evil and hateful that, even as we weep on the command of Yash Raj Films, it feel filmy, fraudulent and exploitative.

As does the very fake and faltu climax with some Made in India nonsense. It’s not just annoyingly stupid, but in its high lies the depressingly low ambition of Bollywood.

Sharat Katariya has a very fine sense of small-town Hindu homes, and the rhythms of the cosmos outside.

Like he did in Dum Laga Ke Haisha, here too he is able to create a functional-dysfunctional household which is animated and believable. The characters of mother, Bauji, Mamta, Mauji and his brother and the sister-in-law come together quite nicely to create a family we can connect with.

The language they speak, and the stuff they speak of, has a nice, real ring to it. And whenever the film sits down to work the Usha sewing machine, dipping into the nostalgia of many households across the country that at one point survived on the whirr of its handle and foot pedal, and the diligence of its needle that I found myself back in my Maasi’s house in Jalandhar where all the women took turns to quickly complete a sweater, a kids’ hooded jacket with pompoms on the fancy, new woolen knitting machine.

But the attack of the house of YSR, which simply can’t stomach a film with A-category stars without big tears and bigger victory moments, is like a commercial vomit on a screenplay that would otherwise been able to breathe.

Sui Dhaga has some very fine moments, but overall it’s just one more film ruined by the limited vision of a few who, sadly, decide what works and what doesn’t in Bollywood based on their balance sheet and a worldview too limited to see beyond their hits and those of their chubby pals.

This is sad because Anushka Sharma is quite good. Though in scenes where she has to propel the film forward with her emotions, she dips into her repository of big drama for big commercial films, she’s better when she’s simmering while quietly going about her chores.

Varun Dhawan is a limited actor and there’s a very small, tight circle within which he is good. Give him a scene with high emotion and he either pulls strange faces or dips into memories of his childhood tantrums to get the job done. His uncanny ability to infantalise a character whose growth trajectory is upwards is very irritating and makes the film crawl when it’s meant to soar.