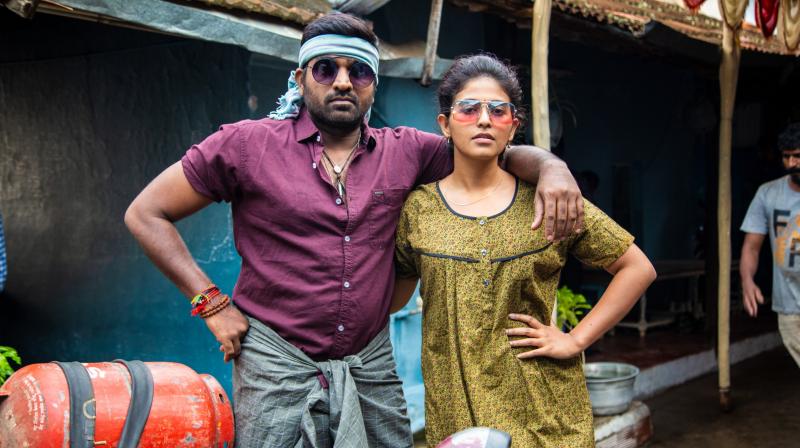 After financial hurdles and delays, finally, Sindhubaadh hits the theatre this Friday. Like how the fictional hero from the fable Sindhubaadh who takes several voyages across the sea, here is our hero Vijay Sethupathi who initially goes by Thiru initially and later assumes the passport name of Hakeem Sindhubaadh who goes in search of his lost wife in an abroad locale. In this third collaboration with director Arun Kumar, VSP takes a mass hero avatar.

The story begins in Thenkasi where Thiru (Vijay Sethupathi) and Super (Surya Sethupathi) are petty thieves and the former is slightly short of hearing. He meets loud-mouthed Venbha (Anjali) a contract labourer in rubber estates in Malaysia who has come to her native on leave. It was love at first sight for him, but not the same for Venbha. However, after a few initial mix-ups, Venbha understands Thiru’s good nature and reciprocates his love. She agrees to marry him much against the wishes of her family. But soon she has to leave for Malaysia. At the airport, in an unexpected moment, Thiru ties the mangalsutra on Venbha. However, all is not well with Venbha, who calls Thiru and tells him that she is in danger and asks him to come to Cambodia with Rs 5 lakhs to rescue her. The rest is all about how Thiru, now Hakeem Sindhubaadh along with his underling Super travels beyond seas to save his beloved wife.

The first half is filled with lighthearted scenes, adorable chemistry between Vijay Sethupathi and his son Surya, healthy laughs by George Maryan and delightful romance between Anjali and Sethu.  The father-son duo’s comic timing is terrific. Anjali sans makeup shines every bit.

Once the story shifts to Thailand, it meanders without any logic in the entire second half. The major problem is the weak antagonist character Ling played by Lingaa who is introduced post interval as a monster and a sadist whose hobby is to kill people at the drop of a hat. However, Arun has used this underdeveloped character only to bring out the action hero in Vijay Sethupathi, with a dozen mindless gravity-defying stunts. Then, all of a sudden towards the end, there’s this skin trafficking mafia angle, which doesn’t quite gel.

While cinematography by Vijay Karthik Kannan is pleasing, music by Yuvan Shankar Raja is a major plus. The film can be enjoyed only in parts.