Thappad opens with a montage of scenes in which characters are introduced through some common themes. 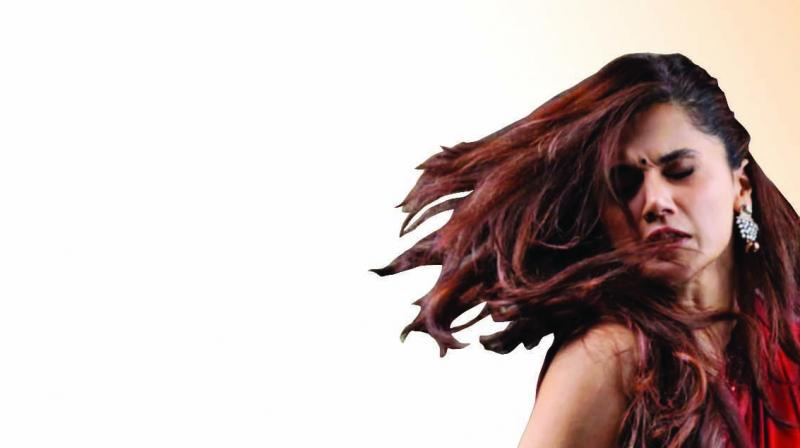 Thappad can not just make you re-examine those incidents, but it can also insert a disquieting voice inside as you do so, one that says what you were feeling then, matters.
Rating:

Thappad is Anubhav Sinha’s 10th film as director and his finest. Not just because this time around he has, while taking writer-director’s credit, inserted his mother’s name in between his own and his father’s, but because Thappad, which gently lifts the lid to peer into couples’ lives, keenly observes the daily lacerations and compromises, the almost subconscious measurement of one’s desires against one’s needs, a balance that sustains and hollows out many relationships. Thappad observes these through that routine familial exercise of finding out how far one can exorcise one’s own debilitating sense of powerlessness by inflicting pain on another.

Thappad, written by Anubhav “Sushila” Sinha and Mrunmayee Lagoo (Reema Lagoo’s daughter), examines power — which can be both, empowering and disempowering — within the family unit with such clarity, bareeki and sensitivity that as we watch the film we begin to evaluate characters’ stray but eviscerating comments that often accompany grand, caring gestures, revealing hidden ugliness.

Thappad, which observes characters and their relationships through the smallest of gestures and comments, doesn’t just inform and heighten our own sense of what’s right and what’s wrong, but has the power to take us back to certain moments in our own lives — moments we may have put behind and moved on.

Thappad can not just make you re-examine those incidents, but it can also insert a disquieting voice inside as you do so, one that says what you were feeling then, matters. And that can be triggering.

Watch it. But if it makes you feel triggered, hug yourself.

Thappad opens with a montage of scenes in which characters are introduced through some common themes. It’s about men and women. It’s about desires, freedom, and the power of orange popsicle.

A young woman is with her finance and, while licking an orange bar, questions their decision to marry.

A lawyer with a trendy haircut is on a drive with her boyfriend and, as she lets her hand glide on the breeze, they both buy an ice cream each, and then they talk.

Sandhya (Ratna Pathak Shah) is sitting with her husband (Kumud Mishra) and he is showing her a photograph, and telling her what her father had whispered into his ear once. Sandhya frowns when he picks up an orange bar.

A mother is driving while her 13-year-old daughter, with an orange bar in her hand, talks with exasperation about the difficulty of finding a groom for her.

Sunita (Geetika Vidya Ohlyan), riding pillion on her husband’s bicycle, is having an ice cream and says something that makes him abandon her on the road.

Orange bar — It’s the silliest, strangest and yet the most deliciously empowering of things. Give someone an orange bar and see what they say, Thappad seems to say.
I loved it!

Soon we settle into a house where Vikram (Pavail Gulati) is busy with some office work while Amrita (Taapsee Pannu) is skipping about fixing this, giving him that, happy and mentally already living in their house in London that he is working towards.

Though Vikram requires her assistance every second, in a brief moment outside the house we get a glimpse of his very casual misogyny.

Later in the evening, while he is having dinner with his father and brother, while his bhabhi is quietly moving around with the servant serving them, we realise that Vikram’s mother doesn’t stay with him, and that he is not keen on joining the family business.

We then visit Amrita’s parents’ home.

Everyone seems invested in Vikram’s presentation, promotion and move to London.

Amrita has hurt herself, but she makes light of it and no one bothers, no one except her parents.

There is repeated mention of her lack of cooking skills, but hardly any talk of her dancing skills.

Next day Vikram gets some good news and he calls up Amrita to tell her that they’ll be having a big party that night.

The party is perfect till he gets a phone call.

Disappointed and angry, Vikram gets into an argument with a colleague. Amrita tries to pull him away, to stop the fight, and that’s when he…

She has a daily morning routine, one that affirms to her own relevance and significance in this little world of hers. One that, just a day ago, felt as if it was nurturing lives and lent value to her own life and choices. Now it feels like a meaningless cycle of chores, one that she invests her time in almost as a diversion from examining her life, choices.

The next morning, as the film waits for an apology, Vikram rests his head on Amrita’s shoulder, expecting some TLC (tender love and care) for what he has been through. He is expecting her to understand his state of mind, have empathy for him.

He was drunk, irritated, frustrated, and all his anger just poured out on her.

While conveying how shitty he is feeling, he says, “Hans de na yaar”, and then tells her not to make it a big deal.

And then Vikram talks about how he had always thought of it as his own company, how much he has invested in his job, and that he won’t work for a company that doesn’t value him.

The penny drops.
No one tells Vikram that what he did was wrong, but a chorus of voices engulf Amrita.

Her mother-in-law, who has chosen to stay away from her own husband, says, “Ghar ki baat hai...”

As Amrita hears all this, often in silence, her clarity about what she wants grows.

That one act of Vikram’s makes her see many things that were wrong with her life, choices.

It shows her what her aukat really is, what she means to people she calls her family.

That one incident keeps distilling life down to the simplest thing — whether she and her feelings matter, to others and to her.

Amrita matters, and she is seen, but by a few.

As Vikram’s narcissism grows with the legal battle, Amrita’s gentle but steadfast resolve makes some women around her re-evaluate their own lives.

While this adds some muscle to Thappad, the peripheral stories are given a cursory treatment.

Taapsee Pannu, who is at the centre of Thappad, is good. But her character is really encased in our hate for Pavail Gulati who plays Vikram with superb subtlety but with all his ugliness, and our love for Kumud Mishra, who plays her dad.

Taapsee is efficient and, as always, pleasing in a good girl sort of way. But I am unable to be gushy about her performances because she is no different here from, say, what she was in Mulk or Badla — different character, different dialogue, but same chops.

Taapsee is better when she is speaking than she is without dialogue and Thappad has several, crucial moments of silence.

Taapsee is unable to create an interiority for the characters she plays, an internal cosmos of conflicting thoughts.

Her silence at best conveys sadness or being emotionally exhausted. It doesn’t talk to us, and neither does it make us think.

Geetika Vidya Ohlyan, on the other hand, is so, so good. She creates a powerful, memorable character out of very little.

Thappad’s strength and power lies in its uncompromising byt gently delivered gender politics. The film could have done many things with its main story.

It could have made Amrita’s fight a heavy one, by putting the onus on women to say “no”, to fight injustice.

Instead of staying focused on the abuse and the abuser, it could have said that women get beaten because they don’t speak up. Or it could have endorsed Amrita’s fight in patriarchal terms — turned her into an empowering devi.

It could have also accepted an apology and then posed for a happy family photo.

Thappad doesn’t do that. Instead, it says, it is okay to own your feelings. It’s okay to seek happiness. The onus is not on Amrita for her reaction. It’s on Vikram, for his action.

It also says that dads and mothers matter. Their support, and that of friends, matters a great deal.

And this is where Thappad can be very triggering. It can made you crave some catharsis. And that, as Amrita’s father says, is a good thing. Only the outcome may not always be a happy one.