In Good Newwz, this audacious message sits inside two circles, or in the womb of the small circle crouching inside a larger one. 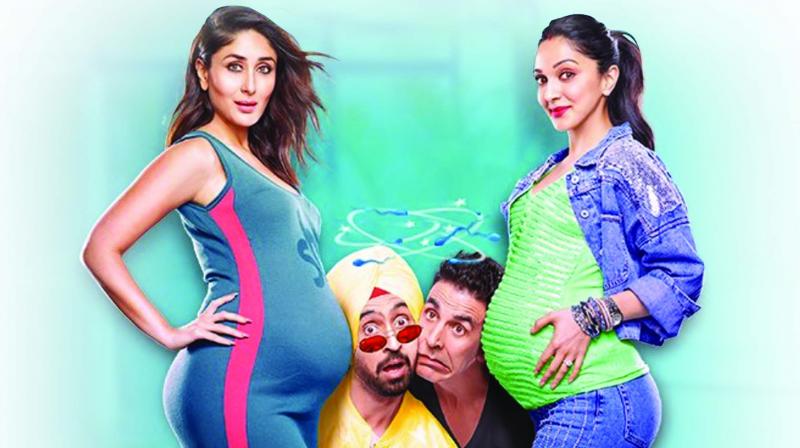 On certain family occasions in the film, this outer ring tightens to stifle the inner one, which consists of the husband and wife.
Rating:

Kabhi-kabhi, under all the glitter and banality, wrapped in lots of silly, filmy situations and guffawing, Bollywood does something smart, significant and delightfully daring.

Good Newwz, a baby-making procedural involving two wannabe mummyjis, two wannabe daddyjis, lots of talk about IVF, semen, ovaries and ovulation cycles, makes a bold, valuable point regarding paternity. Baap ka naam doesn’t really matter, it says, putting the mother carrying the child first and foremost. Only she counts, her rights matter, what she feels is important. Semen donors of the world, who lie back exhausted after saying, “Baby, I have come”, do not.

That’s pleasantly refreshing, and the fact that this patriarchy-challenging idea comes packaged in a comedy that makes us laugh while making its point strongly is an accomplishment of the film’s writers and director.

In Good Newwz, this audacious message sits inside two circles, or in the womb of the small circle crouching inside a larger one.

The bigger, outer circle is made up of the society at large and the larger parivaar made up of sisters and brothers-in-law, fathers and mothers-in-law, as well as sundry nosy and sarcastic aunties whose sole purpose in life is to take a jab at married women who have not yet delivered “good news”, as if it’s a joy they owe more to the world that came bearing sagun lifafas to their wedding than to themselves.

According to Good Newwz, members of this larger circle make it their life’s mission to cast aspersions on the married-but-not-a-mommy women’s marital situation — “it must not be a happy marriage”, on her intention and ability — “something must be wrong with her”, and are generally devoted to making her feel bad for making everyone wait endlessly for “good news”.

On certain family occasions in the film, this outer ring tightens to stifle the inner one, which consists of the husband and wife.

The first couple we meet in the inner circle is Varun Batra (Akshay Kumar), a car salesman, and Deepu Batra (Kareena Kapoor), an entertainment journalist.

Married for seven years, Deepu feels constant pressure from the outer circle to have a child, and this means that Varun has to present his aroused self at her service on days she ovulating.

This gives Varun performance anxiety and puts him under a lot of pressure. He often tries to argue in the chichora style that makes Akshay Kumar very endearing.

Varun talks of feeling potty, of not being able to stand at attention at the beck and call of Deepu’s eggs, howsoever loudly they may be beckoning and eagerly awaiting his sperm.

This marital ribbing is very funny as it reduces sex to a familial chore that must be performed with the sole purpose of producing the desired outcome. A lot of sex talk, adult humour slips by because Deepu is forever sulking and saying, “Come on, let’s make a baby”, and Varun behaves like the teacher’s favourite errant boy who has no interest in submitting homework.

Yet, he tries. But despite Varun’s valiant efforts, nothing happens, and so the proud parents of a baby in their larger circle send them to meet Dr Joshi (Adil Hussain) whose IVF clinic has an incredible strike rate.

It’s here that we meet the other couple in the inner circle, Honey (Diljit Dosanjh) and Monica Batra (Kiara Advani).

They too want a baby, but unlike Varun, Honey is with his Moni every step of the way. And they both believe that with Mataji ki kripa, they will become proud, Punjabi mummyji-daddyji soon.

Hope you noticed the names of the couple and their surnames. Therein lies the film’s drama, or what in Punjabi we call, bhasoori — a messy, complicated situation that does dimag ka dahi. And herein also lies the movie’s gender politics.

In between lots of talk of “apna khoon toh apna hota hai”, that made me very uncomfortable, Good Newwz very cleverly makes us laugh and then, in a rather traditional setting, gently introduces an idea that will make patriarchy shudder for a long time.

It’s all done while cracking jokes, with dialogue that make me laugh out loud, so much so that I think I peed in my pants twice, including when the film forever ruins that Sridevi song from Lamhe — Morni, bagan mein bole aadhi raat ka…

Good Newwz opens with a plug, a kind of a full-length advertisement for a car brand. It is distasteful but has become a common feature of films produced by Karan Johar and Akshay Kumar. Since both are involved here, we get another plug for a baby item that makes potty collection easy.

Good Newwz, written by Jyoti Kapoor, Raj Mehta and Rishabh Sharma (who has also written its dialogue), is smart while being very filmy.

In true Bollywood style, it rains here in sad scenes.

Both the Batras are Punjabi, and the film is very Punjabi — there are lots of big gaddi-shaddis, daru, talk of potty (a scene about “choti-choti tattiyan” is still making me giggle), and there is much nachna-tapna around Lohri fire.

Its characters are cliches. While one Mrs Batra is a nag whose husband is carefree and funny, the other Mrs Batra is a simple, silly girl who believes in Mata Rani.

The only interesting, hatke character is of Honey Singh — the Sikh husband completely at peace with his feminine side. He is adorable despite being loud and pendu (rustic), and is immediately accepting of the strange situation that gets thrown at them.

I also found it interesting that in Good Newwz, the Chandigarh couple, unrefined and dehati, is not just more in love, more in sync, more mature emotionally, but also way less conservative in than the city-bred, seemingly cooler couple.

Good Newwz is a very good-looking film. Its pretty interiors of posh apartments are inhabited by attractive and well-dressed people.

Adil Hussain as the IVF expert doctor who prays before glaring down his patients’ uterus, is good and memorable, as is Tisca Chopra, who plays his doctor-wife, though for a long time I could not take my eyes off her protruding lips.

Akshay Kumar does here what he does best — talk silly and make uncouth, rude remarks about shitting and farting and other such bodily functions very funny.

In one scene, where he smokes some happy stuff and has a giggling fit, he is quite sweet. His comic timing and flair at delivering tuchche dialogue is as good as ever.

Kareena is pretty and efficient, Kiara is cute, but Good Newwz really belongs to Diljit Dosanjh.

The film acquires a heart when the younger couple arrives. And it is then cared for and nurtured by Mr Dosanjh who ups the film’s emotional quotient on his arrival and owns every single scene he is in.

He makes us laugh, cry, and see how limited the two big stars are as actors, especially Akshay.

Watch Good Newwz — for the brave idea incubating in its tummy, and for Mr Dosanjh. He is effortless and outstanding.