Rukh movie review: Engaging form, but without much function

The camera makes us stare constantly, rather intimately at the characters, and yet we hardly ever catch any internal chatter. 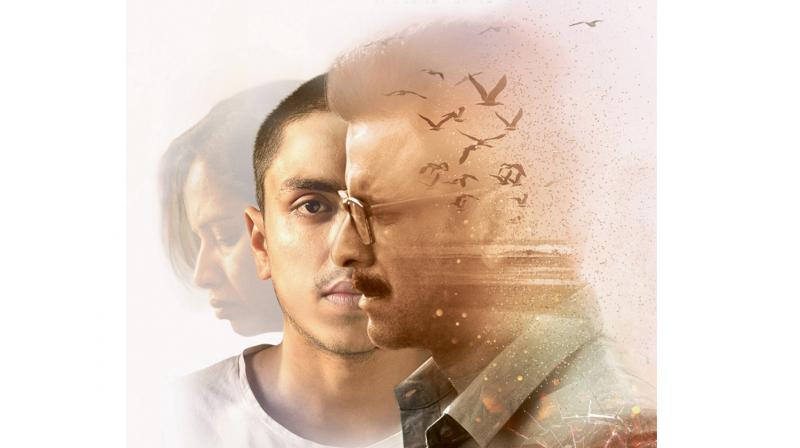 Still from the movie Rukh
Rating:

Rukh, by writer-director Atanu Mukherjee, is a slow-paced, intimately-framed dramatisation of an episode in the life of a middle class family. By all measures it is a significant, life-altering, traumatic episode, and the film tiptoes to it and its aftermath unhurriedly, taking all the time in the world to build up the mild aura of a thriller.

Sparse is a courageous, interesting narrative style. And because it’s tough to pull off, it impresses and holds promise.

Rukh’s screenplay, however, is not just sparse in terms of activity and events, but also complexity and layers that add depth to characters.

Rukh (meaning aspect, but also face), pretends to hold some deep, profound message by mimicking the pace and craft of films which are character studies, films that tell disturbing, affecting tales of human suffering, of men and women flailing against fate accompli, of impossible choices, burdens and small victories, when, in fact, it has very little to say.

Because of its narrative style and because we are in such close proximity to its characters that we almost feel their breath on our face, it’s easy to fall under Rukh’s spell and try to read, perhaps even insinuate, some sublime falsafa. There isn’t any.

Rukh has interesting, engaging form. Sadly, its form is without much function.

Rukh, about a middle class Mumbai family, opens on a depressed, intriguing note.

They seem worried and simultaneously exhausted at being stuck in their worries.

On one rather regular, ordinary day, something unimaginable happens: An accident which looks like an accident, but doesn’t feel like one. Especially not to Dhruv (Adarsh Gourav), Nandini and Diwakar’s son who studies in a hostel but whose presence is summoned by the tragedy.

As Dhruv attends to the aftermath of the accident while trying to understand it, we figure that Dhruv — his life and character — is backlit by a three-year-old incident at his old school.

Slowly, as we accompany Dhruv around the city, catching up with his friends, visiting Diwakar’s leather factory, meeting colleagues and workers, it unravels that Diwakar was being stalked by the dodgy dealings of his business partner, Robin (Kumud Mishra). We also notice that a black car, carrying a stranger and a secret, is now stalking Dhruv.

Rukh’s story is simple, straight-forward and inspired by the likes of Double Indemnity. It keeps us engaged because it has excellent actors and because its slow pace initially seems like a deliberate, clever deception — the ordinary, middle class life of the Mathurs feels like a dull decoy hiding shocking choices, dark secrets.

But it never delivers on that promise because while Atanu Mukherjee’s direction is assured, even skilled, his writing is not. It is, in fact, rather childish.

Rukh has the length and breadth of a feature film, but it’s written like a short film. Too much time is spent accomplishing very little.

Rukh’s characters are sketchy and it’s not plotted with the cocky shrewdness that is the hallmark of good thrillers — screenplays that simultaneously give away a lot while cocking a snook at the audience.

Rukh, in fact, is cagey about sharing. It holds on to a lot, releasing just mingy bits of information after long gaps, making us brace ourselves for something smart, something shocking at the end.

But the film’s slow, pondering pace doesn’t yield anything meaningful or moving and that’s why at the end of Rukh we feel short-changed — neither do we get the high of a thriller, nor are we in any way better informed about life.

The climax is what we sort of figured early on, but stayed put in the hall hoping that so much waiting and slo-mo investigation of life will lead to something more than the predictable. That the film will be smarter than us. It’s not.

Rukh has a talented cast, yet the actors are wasted. Old incidents and back stories which shed some hazy light on characters are all focused on delivering a life lesson to Dhruv, one that’ll release him from the past and catapult him on to the road to becoming a man. But that message is neither enlightening nor original. It’s rather banal — definitely not worth spending almost two hours waiting for it.

Manoj Bajpayee can carry complexity, conflict and the film crackles every time he’s on screen. But his is a short, special appearance.

Adarsh Gourav is very good and gets a lot of screen time, but has little to do. Others, especially Samita Tambe and Kumud Mishra, are given even less — one look and a few lines.

Though Rukh’s cinematography is often cool, there’s no commentary in its camera work nor any attempt at adding layers or dimensions to characters.

The camera makes us stare constantly, rather intimately at the characters, and yet we hardly ever catch any internal chatter. We just read worry and anxiety on their faces, almost as if we walked into Act 3 of a three-act play, feeling inadequate and ill-informed about the characters and their motives.