The wedding comedy will surely get back the era of clean family entertainers and will tickle your funny bone. 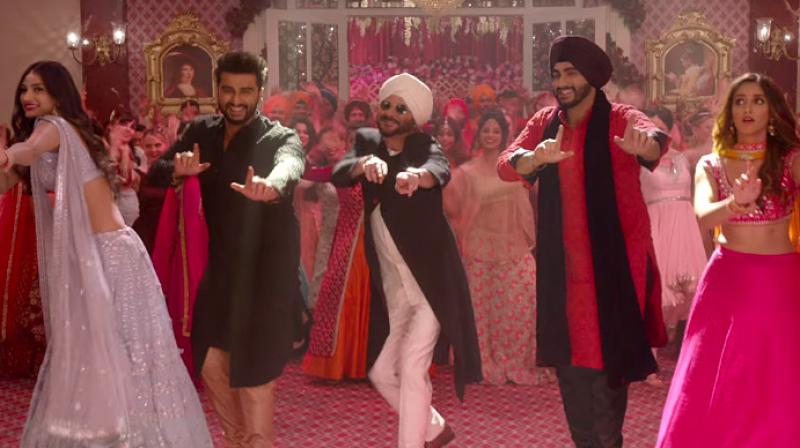 Known for making comedies, director Anees Bazmee, who last directed the awful Welcome Back in 2015, brings you all yet another family entertainer which won't bore you even for a minute. After a long time, a film like Mubarakan will tickle your funny bone.

Charan (Arjun Kapoor), a shy Sikh boy lives with his father Baldev (Pawan Malhotra) in Chandigarh. He loves a Muslim girl Nafisa (Neha Sharma) who is a lawyer but has no courage to tell his family about her.

Karan (Arjun Kapoor), Charan's cousin, who is his lookalike, is in love with Sweety (Ileana D'cruz). Bua (Ratna Pathak Shah) lives in London and wants Charan to marry Binkle (Athiya Shetty) who is the daughter of a rich guy Sandhu (Rahul Dev).

Charan meets Binkle but tells his uncle Kartar (Anil S Kapoor) about his liking for Nafisa. Kartar decides to unite his nephew and his girlfriend, but fate has its own game. Incidentally, Baldev fixes Sweety's marriage with Charan and misunderstands Nafisa as Karan's girlfriend. Who gets whom in the end is what this messy recipe is all about.

Situational comedies have almost taken a backseat in Bollywood but with Mubarakan, the genre has come to life. Confusion at its peak is what this film offers you. Looks like director Anees Bazmee is back in the game with this one. However, the film has clear traces of his previous films No Entry and Welcome. Although Mubarakan is very much needed at this point of time especially when family entertainers have become extinct. The good part of the film is its screenplay which is twisted and engaging.

However, there are certain loopholes in the film too. The climax is predictable to the core. All's well that ends well is what you witness in the end, but again, the film stands out the way confusion is build till the last frame. Also, every film of Anees looks the same. The scene at the shopping mall where the entire cast incidentally meets is exactly the way it was shown in No Entry. Though it is hilarious, there should be some newness to it. But overall, Mubarakan is one of its own kind. Anees has smartly tackled the old wine in a new bottle. It was very much required for him to deliver a good film post the stamp on him of making a haywire comedy.

Over to the actors now. Anil S Kapoor is such a brilliant actor that he maintains the comic element so well throughout. At this age, he is just too good to be on screen. He is the strongest pillar of the film. Pawan Malhotra is so good as a strict and helpless father that he will remind you of his glimpse in Jab We Met. Ratna Pathak Shah is an absolute gem. A scene turns to gold when she is in the frame. Surprisingly, Arjun Kapoor is good with his expressions and comic timing. Playing a double role isn't an easy job for an actor who is being panned for his previous performances. He played a double role in Aurangzeb which was a disaster, but this film will break the ice for him. It is hard to change the audiences' perception, but Arjun will change it with Mubarakan. Ileana D'cruz is watchable. Athiya Shetty has improved a lot as compared to her debut act in Hero. Neha Sharma looks cute, refreshing and does her small part with conviction. Rahul Dev and Karan Kundrra have nothing much to do in the film.

Overall, Mubarakan is a happy film which is meant for your entire family. The film will surely get back the era of clean family entertainers. Don't expect an unusual plot from the film, but it is a decent watch this weekend.