Indu Sarkar review: A political drama like no other; Kriti shines bright

If you cannot tolerate apartheid in the name of politics, this Madhur Bhandarkar scrapbook straight from the 1970s is for you. 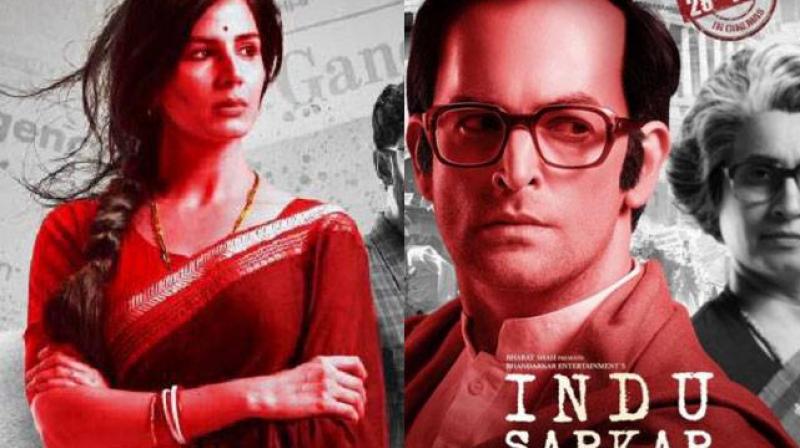 Kirti, with innocence in eyes and fire of rebellion in her heart, is marvelous.
Rating:

In one hand we have political dramas like ‘Rajneeti’, ‘Sarkar’, frolicking at the border between propaganda and what some may call the ‘partial truth’, and in another, we have ‘Indu Sarkar’—brutally honest, riveting and a silent slap to the shapers of this nation who resort to tactics that cut at the very root of democracy. ‘Indu Sarkar’ is not your usual insipid, lackluster, half-hearted attempt at stripping naked the ill-practices prevalent in a country notorious for abuse of power; Madhur Bhandarkar has gone all out with this one.

Born with a fate that deprives her of parental love and social acceptance, mostly due to stuttering, Indu (Kirti Kulhari) buries her dream of becoming a poet at the backyard of her orphanage and settles for a life of domesticity with a man who is hell-bent on shunning his past life of poverty and march towards a path that is somewhat questionable but promises abundant of opportunities, riches and power. Kirti’s character in this tell-all tale is docile and demure; while her government officer husband (Tota Roy Chowdhury) is the official ass licker or, to put it in a polite way, ‘yes man’ to the men on top.

Indu’s world revolves around her family of two and occasional poetry recitation at grand parties, until one day, she stumbles upon two kids who mirror her life during tender years—orphans and victims to holocaust stirred by the emergency period of 1975. The story is embroiled with multiple confrontational scenes between the couple with (stark) contrasting political ideologies—each fighting a battle of his own—that turn out to be the biggest takeaways.

What is a Madhur Bhandarkar film without irking some, causing controversies with its storyline? ‘Indu…’ brings to light the malicious concept of forced sterilization that the Congress government had imposed in the name of population control and uprooting the ‘gareeb janta’ from their places of inhabitance in order to beautify Delhi. The ‘Mummy’ references that Chief (Neil Nitin Mukesh) reiterates is exactly the reason why CBFC had proposed major cuts. Who would have thought that Bhandarkar will get the leading lady to mouth ‘tum log Maa-Bete ki gulaami karte rahoge’ and get away with it? But again, if you have watched ‘Page 3’ and ‘Fashion’, you would know that Bhandarkar exposes, literally rinses the concept in hand and no one’s spared. Be it that Indira Gandhi lookalike changing goggles in the car or Neil Nitin Mukesh lifting the emergency to earn the trust of the people he had so miserably failed for a mere 320 seats, the National Award-winning director has stayed true to his forte.

Call it the Sushant Singh Rajput’s ‘Byomakesh Bakshi’ hangover, which I thought had the best art direction in a period drama of recent times, but the reconstruction of the 70s era is lackadaisical in this otherwise well-researched movie. Sure, Bhandarkar has paid attention to minute details and had done his homework well, but your characters tapping cigarettes on Charminar boxes and the absolutely unnecessary ‘Bobby’ billboard cannot make up for the damage the art department has done. The authenticity, rawness that Bhandarkar movies are renowned for, was missing here, thanks to its lame and pretentious setup. Also, the whining lady who marks her attendance at the background during emotionally charged scenes needs to be banned from working in Bollywood.

Kirti, with innocence in eyes and fire of rebellion in her heart, is marvelous. Sure, the court episode reminded us of a scene from ‘Pink’ that left us stupefied and take notice of this little stick of dynamite, but that does not take away from all the hard work this theater-trained actress has put in. The stuttering, sans a few times, looked and sounded natural. Yes, the rebel in her could have woken up much earlier but it really was about her personal battles and not the subplot.

Neil Nitin Mukesh, as the cold-hearted political tyrant, fits right in and brownie points for his mannerisms. The flip of the hair, those aptly timed hand gestures, the deathly stares; it all heightens the drama, making you simmer with anger. Purpose served!

If you are not a hyper-nationalist or an ardent fan of pressure groups, if you cannot tolerate apartheid in the name of politics, regardless of which party you support, this Madhur Bhandarkar scrapbook straight from the 1970s is for you.