It was never destined to be anything like its insipid prequels, once it had been entrusted in the secure hands of Taika Waititi. 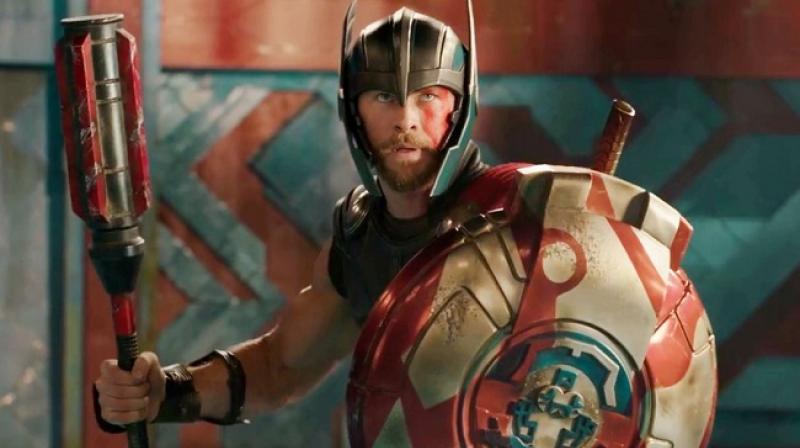 It is the sequel to Thor: The Dark World (2013) and the seventeenth film of the Marvel Cinematic Universe (MCU).
Rating:

When Roger Plant wrote Immigrant Song in 1970, little might he have known that the song would come a full circle 47 years down the line in a movie that in itself is based on all things Norse. Thor: Ragnarok is a karmic culmination on multiple levels. A hero the audience mostly loved to mock has now no qualms making a fool of himself. We have Peyton Reed's Ant-Man to thank for this delectably self-aware, near meta-parodical humour that the MCU has embraced. The film was never destined to be anything like its insipid prequels, once it had been entrusted into the secure hands of Taika Waititi.

Thor (Chris Hemsworth) loses Asgard, the Mjolnir, his famed mane and his even more famed hubris to a hitherto unknown elder sister, Hela (Cate Blanchett). Banished to Sakaar, a planet of cosmic expendables, Thor, finds himself stuck with his cunning adoptive brother Loki (Tom Hiddleston), Bruce Banner (Mark Ruffalo) who's been stuck as his alter-ego Hulk for a couple of years and Valkyrie (Tessa Thompson), a heavy drinking fugitive Asgardian. However, the planet is ruled by a megalomaniacal ruler, Grandmaster (Jeff Goldblum) who takes sadistic pleasure in pitting unsuspecting newbies with a penchant for survival against his grand champion. With the help of his unconventional ensemble, old friend Heimdall (Idris Elba) flanked by some rejuvenated badassery, and a hilariously conceived nomenclature for their collective, the God of Thunder must leave the yet untamed Sakaar to save Asgard the blushes.

Thor: Ragnarok is a superlatively funny film. An element otherwise dissociated with the franchise. There is some tawdry editing hacks towards the climax coupled with some minor continuity errors. Yet, in despite of the glaring inconsistencies with plot originality, with references to Norse mythology and sequences seemingly plucked out of the world of Game of Thrones and even Harry Potter, the film works phenomenally.

The writing and its inherent wit is top-notch, with superheroes you have unwittingly associated with a vigorous sense of misplaced righteousness thanks to comic book culturing, goofing around and increasingly simulating a high on moolah SNL sketch. Do we mind it? Not one microsecond. This is the rehash the genre desperately needed and one that MCU has been excelling in, with Antman, Deadpool and the Spiderman reboot.

Cate Blanchett could have ended up being the absolute best antagonist Marvel has produced on reel till date, had it not been for her anti-climactically stunted character development. But then, who cares when there's such bonhomie at display between a very in-form Chris Hemsworth and a perennially in his element Tom Hiddleston! Hemsworth, a grossly underutilised comic, revels in the opportunity to flex his funny muscles at his disposal. Hiddleston is delightful as the scheming yet affable anti-hero, a role that the versatile actor’s made his own.

Major props must also go to Jeff Goldblum, who makes one yearn for an encore of his brief yet effective Grandmaster act in the future films. Idris Elba is effective and so is Tessa Thompson for most parts. Waititi’s turn as Korg might never get the appreciation it deserves, a motion capture turn at par with the best of cults. But then since its directorial finesse that’s mostly overshadowing his portrayal, there’s hardly any scope for grouse.

When Trent Reznor reimagined the cult Led Zeppelin song for a certain Lisbeth Salander, one couldn’t have been faulted to believe the song had served one of its many purposes. However, in Thor: Ragnarok it is every bit the song of a very unlikely Immigrant, one that you won't be able to resist, however adamantly you might want to try. A culmination too hard to emulate.