Siddique plays Babu Bihari, the assassin for hire, with a twinkle and lewd lust for life in his eyes. 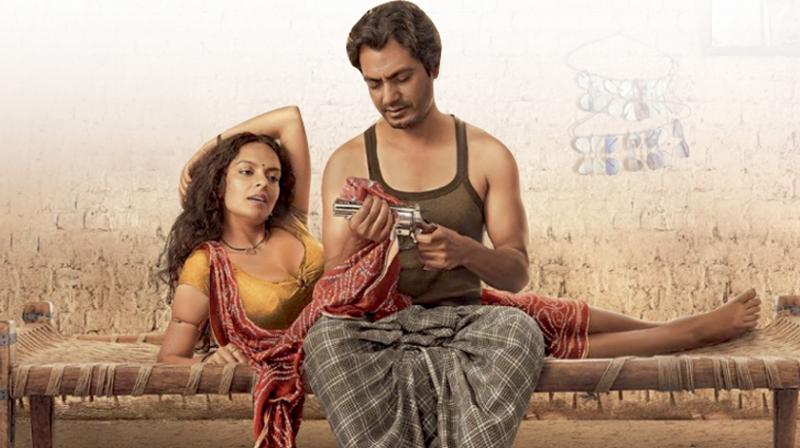 A still from 'Babumoshai Bandookbaaz.'
Rating:

If Tigmanshu Dhulia and Anurag Kashyap were to make out, they’d bear a child called Babumoshai Bandookbaaz.

This film, written by Ghalib Asad Bhopali and directed by Kushan Nandy, is a genre piece related by blood to Gangs of Wasseypur 1&2, Paan Singh Tomar and other such foul-mouthed paragons of swaggering patriarchy from dusty dehat.

They all have similar plot trajectories, sound the same and celebrate a certain type of masculinity. These films tell stories of macho men in mofussil who shoot a lot, grudge a lot, love a lot and get deceived a lot.

The fact that these narcissistic, criminal, but somehow morally defensible central characters — the poor things are victims of twisted fate lines and their own deviant stupidity — are played by actors skilled at cinematic sorcery gives these films an indie cred that’s celebrated from Andheri to Cannes.

Problem is that though BB has a foul mouth, chamkeela characters and the fabulous Nawazuddin Siddique, it’s also inept.

Babumoshai Bandookbaaz has a beginning, a middle and an end, but it maunders rather incoherently while getting from point A to B to C.

In Uttar Pradesh, Babu Bihari (Nawazuddin Siddique), a sharpshooter, enjoys the pleasure of the hunt more than the kill and lives up to the reputation he’s acquired by doing so for years.

Babu lives by a simple code: Rozi se no gaddari. Once a job is taken, it must be honoured. And he doesn’t miss; he doesn’t flinch.

One Dubey (Anil George) passes on cash and targets — mostly local, political inconveniences — to a cop, who passes them on Babu after taking out his cut.

On an assignment from Jiji, Babu spots Phulwa (Bidita Bag), a cobbler, and what follows is a lovely scene involving a sandal and `20 fine for letching.

She too has a list for him, and he obliges happily. But Jiji doesn’t take kindly to these free-fund walle murders.

Next comes a contract for three targets from Dubey, but it’s also given out to another, younger sharpshooter — Banke Bihari (Jatin Goswami) — who considers Babu his guru.

Tara Shankar (Bhagwan Tiwari), a cop who has seven sons and a pregnant wife he respectfully calls Meenaji, is summoned to stop Babu.

The guru and chela are respectfully competitive. While trying to outdo each other and dodging Tara Shankar, they share a drink and have a heart-to-heart about the going rate per head.

Over time, they grow close. But one harbours a deadly secret that will change their lives.

An awkward plot jump takes us to the end that’s appropriate, but also rushed and clumsy. It needed more tension, more drama, more pace, like the rest of the film.

Action movies need lots of fast action and tension. But Babumoshai Bandookbaaz has very little of it.

The film is basically plonked on Siddique’s shoulders, but an actor is only as good as the script.

To be fair, there’s profound talent in the writing. Siddique has some crackling lines and scenes, and the film has several interesting characters. But the screenplay desperately needed some zest and action.

Several succulent characters appear in situations that are bursting with exciting possibilities, but they don’t take off. Ghoom-phir ke the film keeps returning to Siddique to keep the entertainment quotient high.

The direction is also a bit erratic and shoddy. Initially, the film’s background score accompanies Babu on his bandookbaazi outings, but halfway through it disappears.

Siddique plays Babu Bihari, the assassin for hire, with a twinkle and lewd lust for life in his eyes. He is excellent, entertaining and may well have created an archetype. Bidita Bag, Jatin Goswami and Bhagwan Tiwari are all very good. Divya Dutta is effective but also repetitive. She turns every character she plays into the same two-tone entity: clenched-jaw sternness in a tango with loose, negotiable morals.

Babumoshai Bandookbaaz would have been a great film if it had spent a little more time bringing alive the fabulous characters it creates — Dubey the voyeur who asks a maalish-waala to massage his wife “free ho ke”, while he watches; the cop who has piles, and the other cop who is going through his seventh son while hoping Meenaji and his eighth child will be a girl. But, sadly, it doesn’t.