Arrival movie review: The end is the beginning is the end

The film opens with Dr Louise Banks, a professor of linguistics, reminiscing about the birth and death of her daughter. 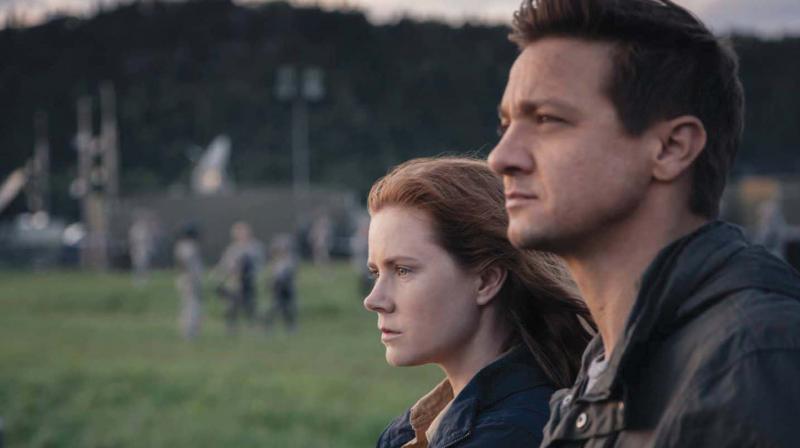 A still from the movie Arrival
Rating:

When Colonel Weber (Forest Whitaker) contemplates whether they should attack the aliens, Dr Louise Banks (Amy Adams) narrates a story about Captain Cook and the Aborigines, and how a linguistic confusion leads to the nomenclature of kangaroos. The story is made-up; the Aborigines were nearly wiped out, but Banks’ point is that if we at least attempt to understand each other, a lot of conflict and misery can be avoided. A glimpse into the future based on retrospection helps them change their present. Denis Villeneuve’s Arrival, based on the short story, The Story of Your Life by Ted Chiang, is not a regular sci-fi, alien invasion film, in that it simply uses the genre to contemplate on questions of love, loss, time and memory.

The film opens with Dr Louise Banks, a professor of linguistics, reminiscing about the birth and death of her daughter. Her mundane academic life is interrupted when alien spaceships land at 12 different spots on Earth. She, along with Dr Ian Donnelly (Jeremy Renner), a military astrophysicist, are recruited by Colonel Weber to assist the Army in understanding the purpose of the aliens’ arrival, and to determine “how can this be used against us?” What is remarkable about the film is that there is no fanfare to accompany the landing spaceships, nor are these ships lit as brightly as the Milky Way. They are austere monoliths, not unlike the ones seen in Kubrick’s 2001: A Space Odyssey (1968). In contrast with human paranoia and their preparation for an Independence Day-like war, these spaceships do nothing to damage the Earth — no emissions, no radiation, no light waves and no craters. Their benign presence further alarms humans if they are there to hurt or help them.

Louise starts communicating with the aliens by teaching them the English language. The aliens, Abbott and Costello, are heptopods, who respond by writing circular sentences in one swoop. Their script has no starting or finishing point; it is an infinite loop, a non-linear orthography. This begs the question: is this how they think? Are our stories defined by birth and death, or do certain days define our stories beyond life? More importantly, the film hints at (but does not explicitly bring up) Nietzsche’s idea of time being a flat circle: “everything we have done, or will do, we will do over and over and over again” (says Rust Cole from True Detective). Louise’s question to Ian — “If you could see your whole life from start to finish, would you change things?” — thus falls flat, like time. In order to avoid spoilers, I can only add that we know our life is finite, but we live in spite of its absurdities. There are days of love and laughter ahead, which make the journey worthwhile regardless of the certitude of death.

Jóhann Jóhannsson and Max Richter’s background score alternately lends a sombre and poignant atmosphere to the film. The spaces inhabited by humans and aliens indicate the meaning of the nature of time for them. The former occupy rectangular tunnels, match-box sized tents; the latter loom large in a valley, and even inside the spaceship, their surroundings are cloudy, fluid and undefined. Amy Adams delivers a stellar performance with unspeakable grace and gravitas. This is a science fiction film that goes beyond extra-terrestrial conquests. It remains grounded on Earth and asks questions not only about humanity’s relation with itself, but also about humanity’s relation with the universe.