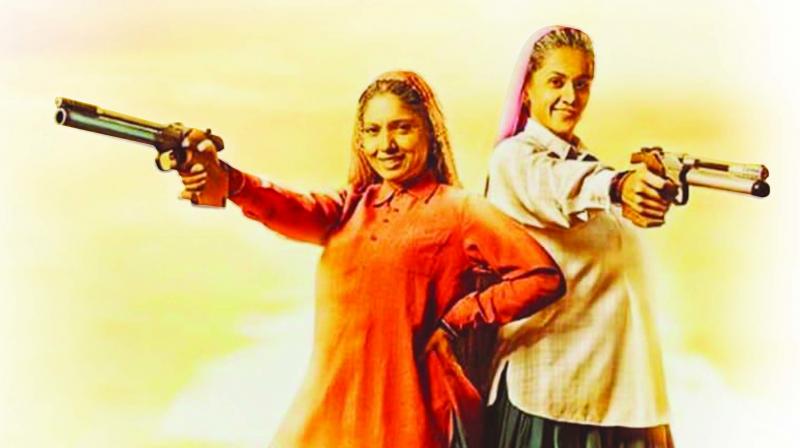 Then there are scenes so clichéd and trite — especially the scenes in stadiums — that they make the film decidedly dumb.
Rating:

The list of things wrong with director Tushar Hiranandani’s Saand Ki Aankh (Bull’s Eye) is long and annoying. For starters, the two stars cast in the roles of Chandro (Bhumi Pednekar) and Prakashi Tomar (Taapsee Pannu) wear such terribly tacky make-up that not for a second can we live with the illusion that we are watching Jat grandmothers in their 60s.

Then there are scenes so clichéd and trite — especially the scenes in stadiums — that they make the film decidedly dumb.

Worse, the film repeats its opening scene in its entirety, revealing not just how inept its storytelling is, but also doubting our ability to retain things.

Yet, despite all its tackiness and flaws, there’s a warmth and feminist moxie to Saand Ki Aankh that forces you to embrace it.

Of course, the story itself, of two real dadijis from UP, who began their shooting career in the late 1990s, is unique and stunning in how many stereotypes it busts.

But the film, decidedly B-grade, or what academics and padhe-likhe log derisively call middle brow, has an emotional power unique only to certain films with low IQ.

Though the film’s setting, universe is familiarly tawdry where things are exaggerated, it’s the film’s writing, specifically its dialogue, that create and then define characters by giving them both — a problem and a purpose.

It helps that the main character is played by Bhumi Pednekar. She holds the film together, often grabbing Taapsee Pannu’s arm and taking her along.

Bhumi is a far better, stronger actress and can carry scenes just with her silence, giving her character an interiority. But in one epic scene, where Taapsee goes batshit crazy, spitting on mardangi and moonch, screaming at men and telling them how they do nothing except produce children, smoke hooka and eat lugaiyon ki kamaai, she rocks.

Apart from show-casing these angootha-chaap village women as bold and fiercely free in their thinking, Saand Ki Aankh also casts the ghoonghat as a restrictive, claustrophobic tool of the patriarchy that, just like the burqa, reduces women to sex objects, by turning them into face-less, name-less properties of men.
I loved that.

In Baghpat’s Johri village, we are in a haveli where in the veranda sit three men smoking hooka and commenting on the happenings in the world, while the women around them are busy sending children off to school, cooking, dealing with gobbar etc. Yet, it’s the men who decide what these women can do apart from taking care of them and their farms.

Prakashi has had a dream which requires a trip to a particular temple to ward off imminent danger threatening her husband, Jai Singh’s (Pawan Chopra) life. Eldest brother, Sarpanch Ratan Singh (Prakash Jha), is the one who decides who does what in this world where men sleep outside, and all the women sleep together inside.

Little Sachin, he declares, will go with them.

It’s 1999, and Dr Yashpal (Vineet Kumar Singh), the teacher who set up a shooting range in the village, has a plan. Chandro and Prakashi are to participate in a shooting competition, but before they can do that, upon their entry into the auditorium, there is much derisive laughter.

But when they win, loud clapping and appeals of “sorry dadiji” follow.

As Chandro and Prakashi travel one city to another, participating in and winning competitions, there’s another operation on — to hide the news of their wins and rising popularity from the men folk at home. This is mainly done by their young ones — Shefali and Seema Tomar — who have also started their shooting training.

In flashback we see how, by chance, these two women began their shooting career with bullets landing straight, in the bull’s eye.

There’s another flashback, in a montage, that shows how these women got to have so many children and the relief that Emergency and Nasbandi brought — real Chandro and Prakashi have eight kids each and 15 grandkids per head.

Saand Ki Aankh has a heart and a purpose. It makes us think of and thank women we owe so much to. Women who have broken barriers, created paths for us to walk on.

Bhumi and Taapsee, who play similarly disempowered and suffering women, have incredible chemistry and its their bond, strong and supportive, which binds the film.

Though Bhumi is decidedly better than Taapsee, it’s their sweet companionship, in the house, khet and shooting ranges, that makes the film pulsate.

It’s when the film tries to make them cute, by getting them drunk or say the F-word, that it feels filmy and fake.

It’s the moments when they point and shoot that gives them and the film power, and swag.

While their make-up is really annoying, the one thing the film gets right is that quintessential bra-less look of Jat women. It has always intrigued me — that thrust of free will and movement under covered head and face.

But it’s the film’s funny yet feminist and sharp take on the ghoonghat that is truly unforgettable. Instead of just harping on how restrictive it is, Saand Ki Aankh shows us what the world looks like from behind the ghoonghat.

I, for one, always ready to rant about the ghoonghat being as regressive as the burqa, had never thought of this.