Ajji opens with this brilliantly scathing scene that’s constructed with a zealous eye on the climax. 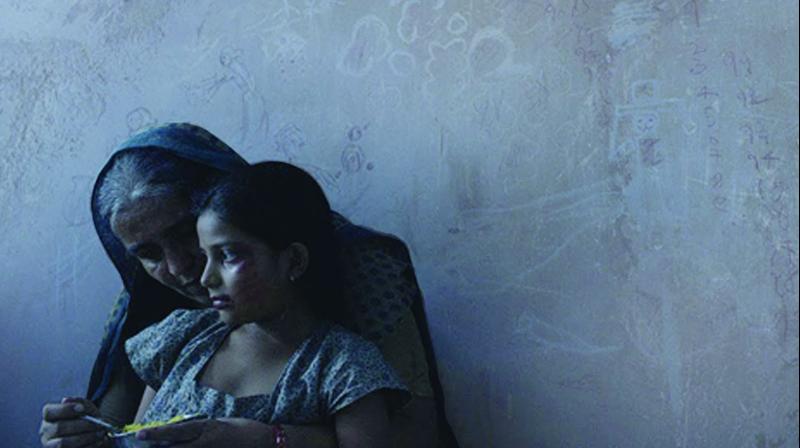 A still from the movie
Rating:

It’s late at night and Ajji (Shushma Deshpande), despite her aching, stiff knees, is doddering through the lanes of her colony towards Shiv Tekri. Five-month pregnant Leela (Sadiya Siddiqui) is with her. Flashing a torch around, Ajji calls out: “Manda, Manda.” Their movement, noise and the light from the torch alarms some nightly creatures foraging around in the security of the dark. They pause, scan and, sensing no threat, return to their business. No one is around when Leela and Ajji find Manda (Sharvani Suryavanshi) in a garbage dump, semi-conscious and writhing in pain. She’s hurt, she’s bleeding, she’s 10 years old. Next, in their crummy little shanty quarter, an inspector (Vikas Kumar) is perched on a stool, facing Ajji (grandmother), who is sitting on the floor, cradling Manda.  Manda’s mother, Vibha (Smita Tambe), and father Milind (Shreyas Pandit) are also there — distraught, scared, answering questions.  Leela stands outside the house, listening, watching through a window. The inspector’s inquisition is troubling, offensive, venal because it seems accurate, typical.

Ajji opens with this brilliantly scathing scene that’s constructed with a zealous eye on the climax.  After the inspector leaves, it seems like it’s all over. But then Leela says to Ajji, “Ajji, jaane de”. And we know then, immediately, what’s going to happen. What Ajji, by writer-director Devanish Makhija, is about. Ajji is fantastic, brutal in its imagination, construction, and, till it takes a turn for the trite and predictable, in its politics as well. The film’s screenplay, built around four crucial scenes, follows the usual trajectory of rape-revenge films. There’s the inquisition, “the mannequin scene”, another kind of questioning, and, finally, the retribution. But Ajji is the sort of film which sits seething at the other end of the spectrum from films which prefer to show the elements — thunder, lightening, weeping skies — before a woman, dishevelled, distraught, emerges from a godown, a construction site, a haveli…

Ajji is bold in its decisions of what it shows and what it doesn’t. It’s sensitive and yet determined to make us see, imagine, join the dots.   It’s not interested in making us comfortable, help us tide over all that’s unpleasant, violent, vile. Ajji wants to push us beyond what it imagines are the limits of our tolerance, to illicit a reaction, a response, to make sure these gruesome scenes, these brutal facts stay with us. It wants to make sure we can neither ignore nor forget.   The mannequin scene, for, example, is revolting, shocking, but it’s more than just about sexual and physical violence. It’s about the audacity of evil. Sakshaat. It’s a scene that will keep popping in your head, making you shudder and you will find yourself, by default, trying to change the topic in your head.  Thankfully it’s in Ajji not just for the writer-director’s creative-badass jollies, nor is its purpose just to be sexually explicit for the sadistic-erotic gratification of those so inclined. It’s a very important scene in the film’s scheme of things. It hints at what may have happened, and it guides us — by emotionally battering and aggravating us — to decide, in unison with the film, of what must happen. It is what I’d call the crux of the matter, the raison d’etre of rape-revenge films.

Just a rape is never enough in rape-revenge movies. There has to be more — moral delinquency which seals the audience’s approval for vengeance, that makes taking primitive, punitive vengeance not just morally okay but imperative.
So, suicide. More humiliation. More tragedy. Another rape. A tragic death. It’s this moral cunning, exploitation that gives rape-revenge movies a B-grade soul. One problem with rape-revenge movies is, of course, that they often become all about the righteous one who seeks revenge on behalf of the victim.  Thus, Ajji, and not Manda, deserves to be the film’s title. The other problem is that the resolution they offer is part of a cyclic patriarchal power game — one that’s designed to keep penises and patriarchy in business, and flourishing.  Like rape, the resolution they offer is about power that disempowers, and not power that empowers. It’s always revenge. Never justice. It’s always individual glory. Never systemic reform.

Choices. Choices. Choices. Films are all about the small and big choices its writers, directors, cameramen, art directors and editors make about who, what to keep in the frame. In Ajji, we see a lot of filth. Garbage. Strays. Dogs. Rats. Drug addicts. Prostitutes. Bloody faces. Religion. Each one constructs the world the film is set in a way that’s both intelligent and impressive despite being studied. It does make some odd choices, though — like making Ajji, who alters clothes for Rs 30-50 a piece, and her pal, the kasai, rather fluent in English. Thankfully, the performances — especially by Shushma Deshpande, Abhishek Banerjee, Vikas Kumar, Sadiya Siddiqui and Smita Tambe — tower over these glitches and make Ajji a greater, fabulous film. But it’s difficult to forget that encased in this standout, bodacious film — which singes and then numbs you with a mix of heart-breaking grief and rage every time you hear the line, “Khoon band hi nahin ho raha” — is a medieval, moral, patriarchal soul. Choices. Choices. Choices.