Horror is an extremely tough field to be inventive as most components of frightening flick have been tried and tested in all possible ways. 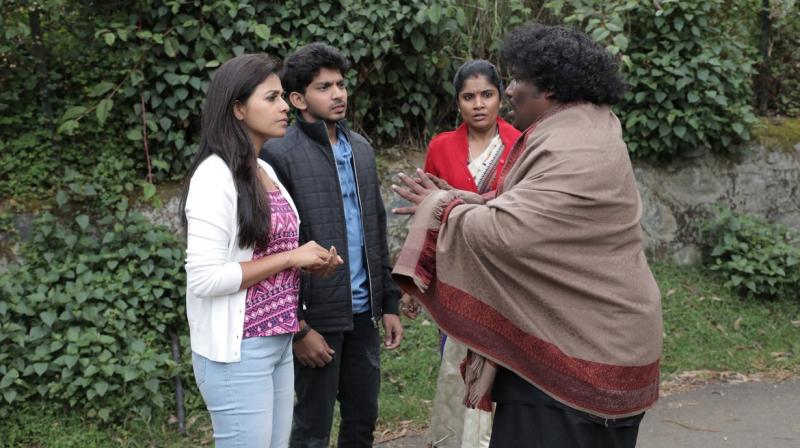 Lisaa, touted to be the first 3D horror film and directed by debutant Raju Viswanath, follows the faithful horror genre template of a lonely house in a remote place, a weird doll, a rocking chair, doors making squeaky noise, TV and music systems automatically switching on, and a black silhouette moving up and down in a rapid fashion among other tropes.

Lisaa (Anjali) sets out to meet her grandparents who live in a remote place in the ‘Western Ghats’ as she wants to get their consent for the second marriage of her single mother. Lisaa plans to leave for the US soon and hence she convinces her mom to remarry. She takes Jagadish (Sam Jones) her junior in college along with her. There she finds that her grandparents DJ and Saramma (Makarand Deshpande and Saleema) are not cordial and they behave strangely. The duo also experience supernatural occurrences. And adding to their woes, there’s no cellular network coverage. Though Jaggu says that the place is haunted with ghosts and suggests they escape, Lisaa who senses something wrong with the old couple is firm to stay there and is determined to unravel the truth. Whether Lisaa succeeds in her attempt forms the rest with a social message delivered towards the climax.

A slimmed down Anjali looks pretty and has given a decent performance. Sam Jones plays an effective foil to Anajali and has delivered what is expected out of him. Brahmanandham and Sulekha as Sam Jones parents do nothing much to the story as their addition in the cast is to serve the Telugu (version) audiences of the movie. Ace Hindi actor Makarand Deshpande’s character has been written as a caricature and hence turns less impactful. Yogi Babu appears in two scenes and does his usual antics.

With the limited budget, cinematographer PG Muthaiah’s 3D effects are quite decent and interesting. However, focusing more often random things in 3D to emphasize it’s a 3D film is unwarranted.  Horror is an extremely tough field to be inventive as most components of a frightening flick have been tried and tested in all possible ways. Though the film had an interesting premise and the runtime also goes in favour of it, lack of coherent story and fast paced screenplay makes Lisaa an average watch.