Shot with dizzying camera movements to mimic the effect of zero-gravity, the film divests its characters of a three-dimensionality. 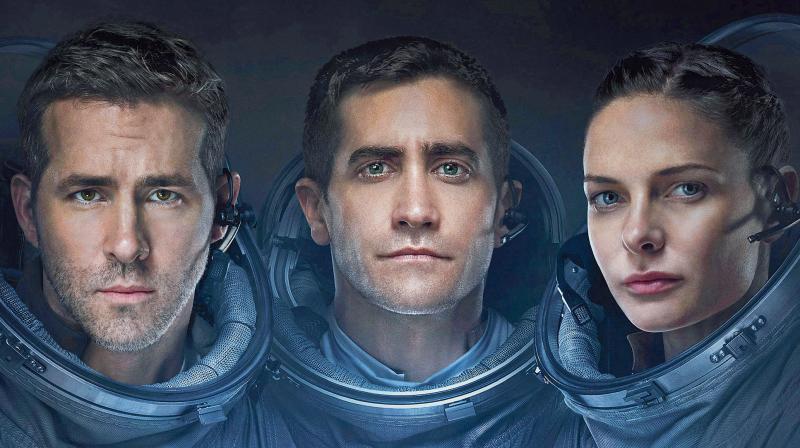 A still from the movie Life
Rating:

Daniel Espinosa’s Life, set in space, combines elements of alien and body horror. Six astronauts working at the International Space Station await the arrival of Pilgrim 7 from Mars. This shuttle dispatches samples of Martian soil in a scene that hints at what drone delivery would look like, if drones were drunk. The samples include a multicellular organism which becomes active when exposed to the same environment as human beings. Dr Hugh Derry (Arion Bakare) forms a filial bond with the organism until it is discovered to be hostile; it feeds off of not only living beings, but also coolants and oxygen candles, and gains strength to the point of being able to survive in vacuum for an indefinite period — a Frankensteinian tragedy borne out of human hubris.

The film is reminiscent of Ridley Scott’s Alien for its obvious themes, indeed, but it is so resolutely uninspired in its structure that it also brings back Renny Harlin’s rogue shark film, Deep Blue Sea (1999). A motley crew works on a scientific experiment which goes awry, and one by one, the characters are dispensed with until the responsibility to save the world falls on the shoulders of at least one white American. Here, on the International Space Station, we have crew commander Katerina Golovkena; Rory Adams (Ryan Reynolds), the crew mechanic; Sho Kendo (Hiroyuki Sanada), the second in command; and a team of space biologists and doctors — Dr David Jordan, Dr Miranda North, and Dr Hugh Derry. Derry conducts several experiments on the organism, which is named Calvin by a group of children on Earth whose school wins a competition. Calvin seems benign at first, partaking of the new environment, but almost immediately shows signs of intelligence. It is, as one character puts it, “all muscle, all brain, all eyes”. But it soon reveals its parasitic characteristics when, as the Frankensteinian creature is wont to, it attacks its creator, and morphs into a giant monster that resembles a hybrid of a starfish, a squid and an octopus.

Before Calvin takes centrestage, most of the film feels like a documentary on life at the International Space Station, wherein the terrestrial humans’ curiosity about the eating, sleeping, exercising and defecating habits of astronauts is addressed. Shot with dizzying camera movements to mimic the effect of zero-gravity, the film divests its characters of a three-dimensionality. The only two people who have some semblance of a background are David and Sho. The former is an Army doctor who is shell-shocked after serving in the Syrian war; the latter has a wife in Japan who delivers a baby just as he is on the verge of creating history by being a part of the team that discovered life on Mars. But if there is anything that humankind should learn from the reference to Syria is that our own race is so deeply rotten and evil, that it is insanely naïve to believe that establishing contact with aliens could ever serve us in a positive way.

Indeed, if one were to stretch this metaphor, Calvin stands in for the outsider that the post-globalisation world is more than willing to shut out. In the third act of the film, Miranda reflects on the abstract nature of borders, how they are not visible from the outer space. But we also see the urgent need to isolate Calvin, to contain and compartmentalise it, to shut one door after another to prevent its entry.

The twist, when it comes, does not do much to alleviate the film. When nearly one hundred minutes of the film are spent on old wine in a new, CGI bottle, this last minute shocker ends up underlining the sluggish and stale nature of the plot, which is more assembled than inspired.