Jackie focuses on Jacqueline Kennedy’s days around the assassination of her husband, President John F. Kennedy. 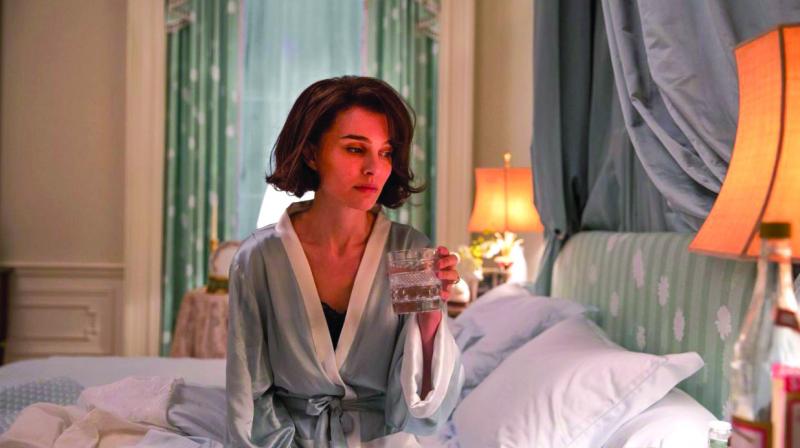 A still from Jackie movie
Rating:

There is a scene is Ben Stiller’s 2007 outing, Tropic Thunder, a meta-movie, where Robert Downey Jr’s character critiques Stiller’s performance in a previous movie: “You went full retard, man. Never go full retard.” Pablo Larrain’s Jackie takes a similar turn; it is a grand and meticulous exercise in impersonating, in re-enacting and reincarnating. It goes full Kennedy.

Jackie focuses on Jacqueline Kennedy’s days around the assassination of her husband, President John F. Kennedy. It moves in a non-linear fashion. Her interview with a journalist (Billy Crudup), recounting her version of what happened, is regularly interspersed with flashbacks. We see Mrs Kennedy in her heydays, recording a tour of the White House — the unreal resemblance of which to the original has to be seen to be believed; then immediately after the assassination, grappling with a profound personal loss as a wife, as well as the need to remain dignified in public as the First Lady.

At the same time, Jackie also struggles with the sudden loss of power. She was a much beloved icon in the American imagination, at par with the most famous faces of Hollywood. Therefore, to then be pushed aside fosters a white hot anger. She will grieve in her own way. She wants a magnificent funeral procession for her husband, one that must be televised, if not to subdue the horror of the assassination, then at least to leave as deep an impression in the public imagination. Within three days of her husband’s death, Jackie is talked down to by men around her, her demands stalled, if not dismissed entirely. Amidst this maelstrom, Jackie has to break the news to her children. Portman keeps up the steely reserve even here. Her tenderness doesn’t cut ice, for there seems to be a single-minded focus on conveying Jackie’s stoicism and her accidental self-fashioning as the most beautiful widow. In her reverie however, as she obsessively dresses and undresses while listening to her husband’s favourite music, she conveys a chilling loneliness.

Jackie’s interview with the journalist is interesting in its exposition of truth and history, however trite the subject may seem in this age of post-truth. Jackie asks, “When something is written down, does that make it true?” The journalist replies, “It’s all that we have.” Jackie corrects him, “Had. We have television now. Now people can see with their own eyes.” This seems to be the driving force behind the faithful recreation of archival footage from 1962-63, as though Larrain wants one to agree, “This is precisely how it went down.”

Another key scene that is significant for its reverberations is Jackie’s interaction with Robert Kennedy (Sarsgaard). Jackie is fervent in her desire to give JFK the same stature as Abraham Lincoln, but Robert is quick to point out that her act of memorialising stands on a very shaky legacy — an unresolved civil rights crisis, Vietnam War, and messy relations with Cuba (which only thawed during Barack Obama’s last year in office). And lo! Jackie appropriates the myth of Camelot, the Arthurian legend responsible for much of England’s national identity, to propagate the idea that the Kennedys’ term in the White House is glorious precisely for its ephemeral quality, the charm of which cannot be recreated even by better future leaders. In her strong-willed and spectacular mourning, it is she who effaces the hollowness of her husband’s tenure, and gives the grieving nation a cultural icon.